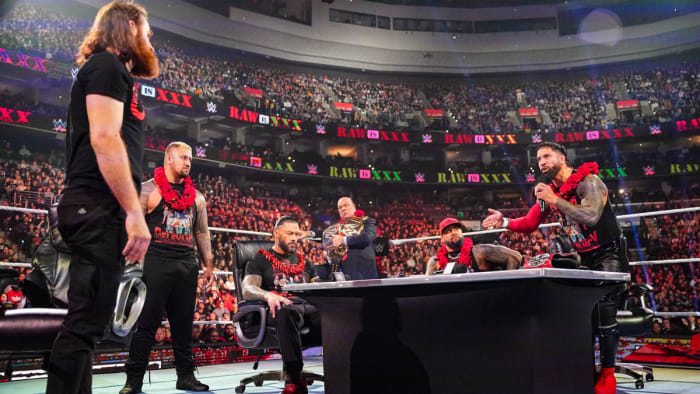 Last night’s Raw drew the largest audience for the show in almost three years, with 2.34 million viewers and a .70 rating in years 18-49.

The 30th anniversary show was expected to bring in big numbers because whenever WWE brings back big stars from the past, and that has included Hulk Hogan, Ric Flair, Undertaker and DX, the numbers always go up with younger viewers.

Due to the ad-free nature, the first hour averaged 2.64 million viewers and attracted a .80 in 18-49. It was actually one of the biggest first-hour to third-hour drops in the show’s history, which sounds awful, but given the big numbers, it was to be expected. It shouldn’t be taken negatively when you have a three hour show and the first hour is commercial free that there is a big slump. And the third hour was still over two million viewers.

Specifically, by the third hour, most of the key people advertised that would have led to the huge increase in numbers had already appeared on the show, whether it was Hogan, Flair, Undertaker, or the Bloodline trial of Sami Zayn.

Raw was number one on TV in 18-49, even beating The Bachelor on ABC and The Neighborhood on CBS in the demo. The number two cable TV game, the Kansas vs. Baylor college basketball game on ESPN, made 1.22 million/0.36, so Raw almost doubled it.

Raw won every major demo by a huge margin on cable except women 18-49. It won that, but Below Deck did a very strong number for second place.

Overall viewership saw Raw finish sixth that night, its best performance in a long time. It was followed by just five shows on Fox News.

It was the most viewers for any episode of Raw since February 17, 2020, at a time when Randy Orton and Drew McIntyre were making big segment counts on the show.

The three hours were: