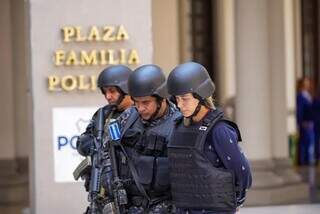 Colombian Margaret Lizeth Chacón Zúñiga, 42, was arrested this Wednesday (18) and accused of involvement in the plot to assassinate Paraguayan prosecutor Marcelo Pecci. He was shot dead on May 10 last year while on his honeymoon on the beach in Cartagena de Indias, Colombia.

Marcelo Pecci headed the Paraguayan State Ministry’s task force against organized crime and even participated in the repression of drug traffickers in the Mato Grosso do Sul border strip.

Margaret was arrested by Interpol (international police) in El Salvador, Central America. She is the wife of Andrés Felipe Péres Hoyos who was arrested on Sunday (15) along with his brother Ramón Emilio Pérez Hoyos.

The two confessed to ordering Marcelo Pecci’s death at the behest of a Paraguayan drug dealer whose name they did not reveal. Police officers in Colombia and Paraguay suspect the drug dealer Miguel Ángel Insfrán Galeano, “Uncle Rico”, head of the Insfran clan, to be the mastermind.

According to the Colombian police, Margaret Lizeth played an active role in organizing the murder. She arrived in El Salvador on May 26 last year, after which she began to travel constantly to other countries in Latin America. The only exception was Colombia. Salvadoran Wilber Huezo, 47, who housed the fugitive was also arrested.

Colombian investigators claim that it was brothers Pérez Hoyos and Margaret Lizeth who handed the money over to Colombian Francisco Luis Correa Galeano, who was responsible for hiring the gunmen.

Arrested in Medellín less than a month after the crime, Francisco confessed that he had been hired by the Pérez Hoyos brothers to prepare the murder.

The brothers’ first meeting with the shooter took place on April 30, 2022, the day of Marcelo Pecci’s wedding to journalist Claudia Aguillera. The masterminds knew well in advance that the prosecutor would spend his honeymoon in Colombia, so they tried to order the crime precisely on Colombian territory.

Venezuelan Wender Still Scott Carrillo, the originator of the recordings; Eiverson Adrián Zabaleta, in charge of the logistics of the crime; and Marisol Londoño and Cristian Monsalve Londoño, who oversaw the prosecutor’s moves, were sentenced to 23 years in prison and are serving their sentences in Colombia. They confessed to the crime and accepted the summary judgment.

On the outskirts of Caracas, Venezuelan Gabriel Salinas was arrested in December, allegedly driving the jet ski that brought Wender to the private beach. Colombia asked for his extradition, but the request was denied by Venezuela, where he remains in prison.

Francisco Luis Correa Galeano is yet to be brought to justice. Arrested, he began to cooperate with the police. Despite the eponymous surname, Francisco is Colombian and not related to the Paraguayan drug dealer “Uncle Rico”, who even operates on the Mato Grosso do Sul border.