Meet the couple, who have had four weddings, to celebrate their $16,000 nuptials – and say it’s “not excessive” and they plan to renew their vows every few years.

Ashley Miller, 38, is originally from Los Angeles, California, USA, while her partner Larry Lansing, 41, grew up 2,824 miles away – in Troy, New York, USA.

With their friends and family scattered across the US, instead of making one big deal, the couple decided to have four smaller celebrations.

Deciding to go to their friends and family — rather than having their guests come over — they married in four separate weddings that cost a total of $16,098.

Ashley Miller, 38, is originally from Los Angeles, California, USA and has had four weddings to celebrate her marriage to Larry Lansing, 41

Ashley, who works in events production from Los Gatos, California, USA, said: “Ultimately, the four different celebrations happened in large part because that’s what Covid was like.

“After the past few years, and given that my husband and I have families living on opposite ends of the country, we have decided to do these four different ceremonies.

“Realizing that we have family elders and it was really important to share this day with us, we took the party to them instead of asking them to go somewhere. 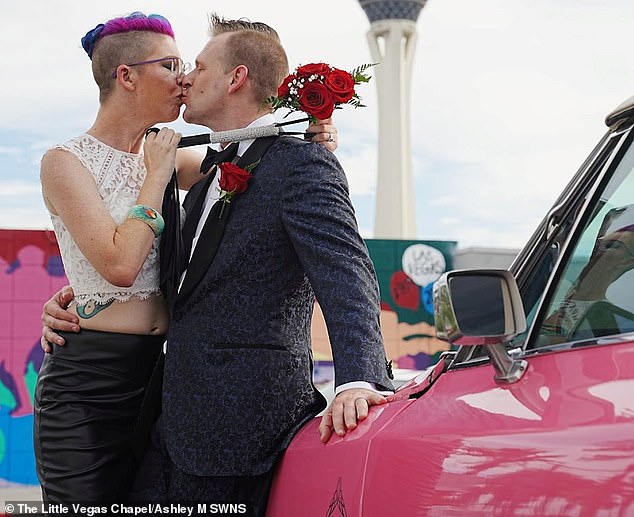 With their friends and family scattered across the US, instead of making one big deal, the couple decided to have four smaller celebrations 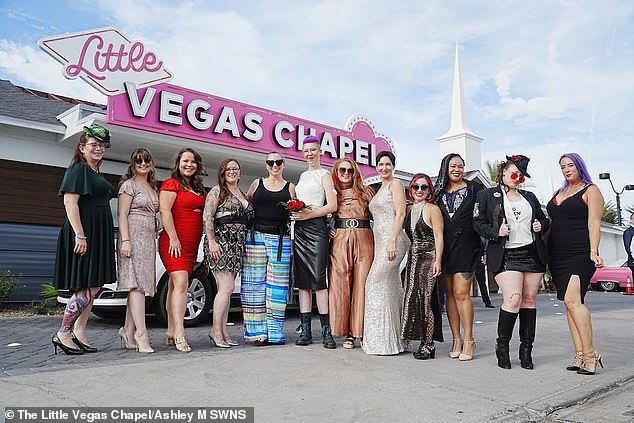 At their last wedding, in July last year, they invited 38 of their closest friends to celebrate in Las Vegas

“People loved it and thought it was a great thing.

1. A legal ceremony in Yolo where the couple wore jeans and sweaters on December 28, 2021,

“Our budget wasn’t much more than if we had managed to fit that many people in one place, as that would have topped everything.”

For their first wedding — a legal ceremony — on December 28, 2021 at the courthouse in Yolo, California, the couple donned jeans and sweaters.

Their union was witnessed by two friends – with a pal, Warren Venice, performing the ceremony as they were licensed to marry couples.

Surrounded by her four friends, the wedding was a last-minute affair after driving home through a storm.

Ashley said: “That was our decision that we were going to get married anyway.

“One of the friends we were with happened to be a minister who could legally perform the ceremony and the other was our witness.

“There were only four of us – in jeans and sweaters.

“A very informal affair which led to us wanting to host the larger parties for our families.

“We wanted to celebrate with them more than we could with a phone call or a video call.

“We didn’t think that was excessive as we wanted the whole family to be able to celebrate with us.

“We plan to renew our vows every few years starting in 2024 and celebrate for one more week for all our family and friends.

After telling their families, they received mixed reactions to the news that they had been stopped.

Ashley said: “There was joy and congratulations, but there was this touch of disappointment with my dad that he couldn’t be there. 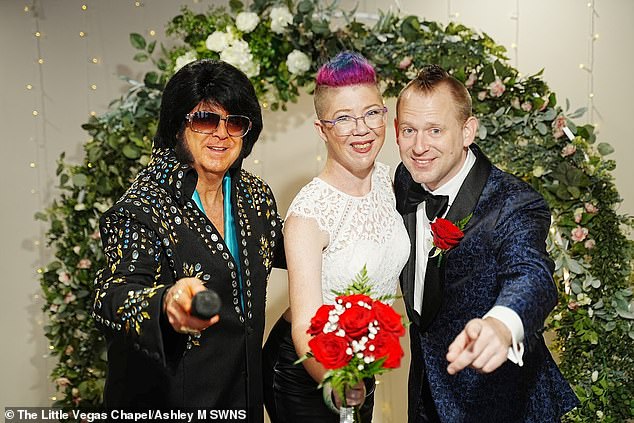 “My dad is more traditional, there was something sad about it, but for the same reason it was very much in character, so it didn’t really surprise anyone.”

Their second wedding took place on May 21, 2022 at a venue in Troy, New York, USA attended by members of Larry’s family.

Ashley said: “This ceremony was for my husband’s family. It was in a very cute place. What I did was focus on packages where most of it was handled directly by the venue. 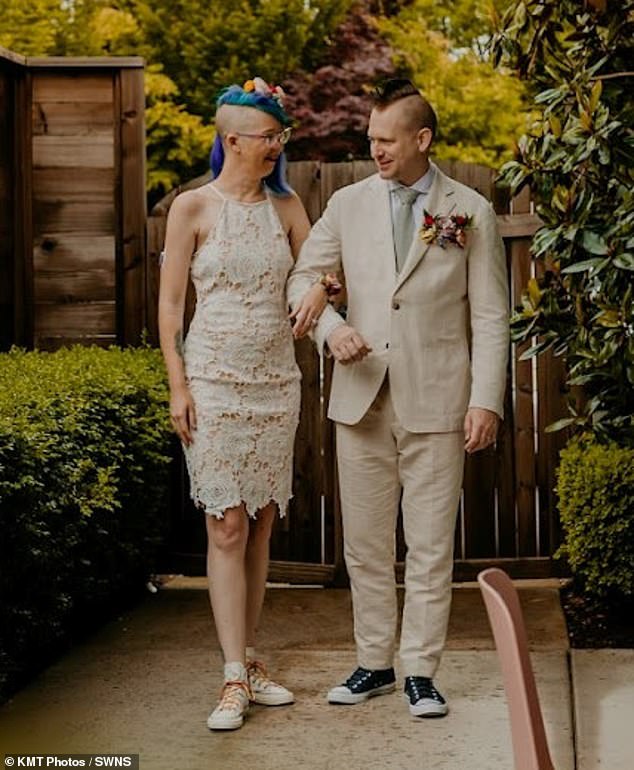 The third celebration took place on June 11, 2022 for Ashley’s family in Oregon, Portland, USA and she described the venue as “very personal”. 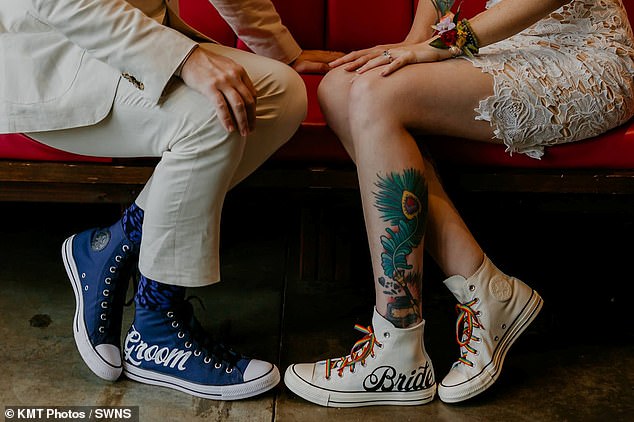 The couple said that during their third event, their focus was on actually speaking to everyone who was there at the time

“Everything was done with a lot of faith and trust from everyone who worked on it.

“It was very sweet, it was a moment for me to meet a lot of his extended families that I had never met before.

“I met some of his childhood friends who I had heard stories from, it was probably the softest of all events, a little more talking than dancing.”

“There were about 30 to 35 members of my family there, which was another touch to make it very personal,” Ashley said. 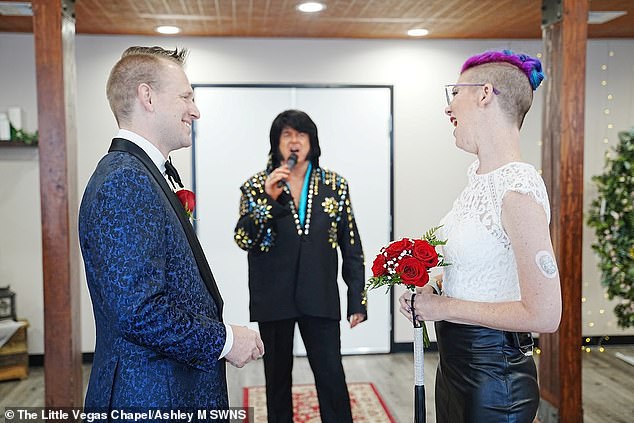 For their fourth celebration, the two tied the knot in an Elvis Presley-style chapel surrounded by 38 of their friends 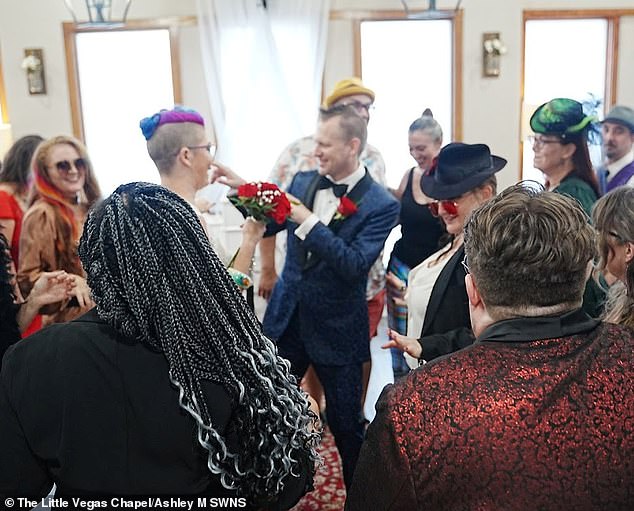 After the ceremony with Elvis, the couple headed to Las Vegas to celebrate with friends at the Cosmopolitan 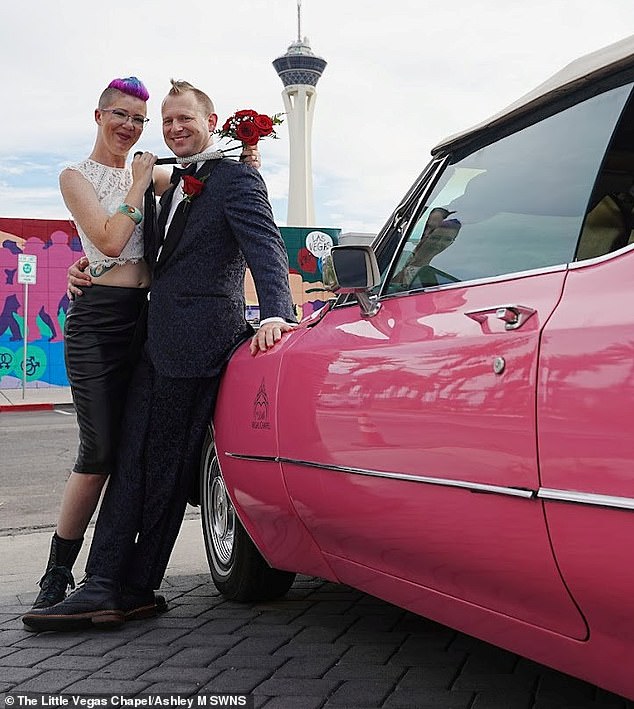 At the fourth wedding, she explained that she and her partner were so goofy and playful that the idea of ​​having a wedding with Elvis was “an absolute delight.”

“We made a point of actually speaking to everyone who was there at the time.

“To smile and laugh, beyond the formal images seen at weddings.”

And her fourth and final big day was at Little Vegas Chapel in July 2022 — with 38 of her closest friends.

The couple wed in an Elvis Presley-style chapel surrounded by 38 of their friends and headed to the Cosmopolitan in Las Vegas to celebrate.

Ashley said, “We live in California, but Vegas is a really great option for people to travel to. 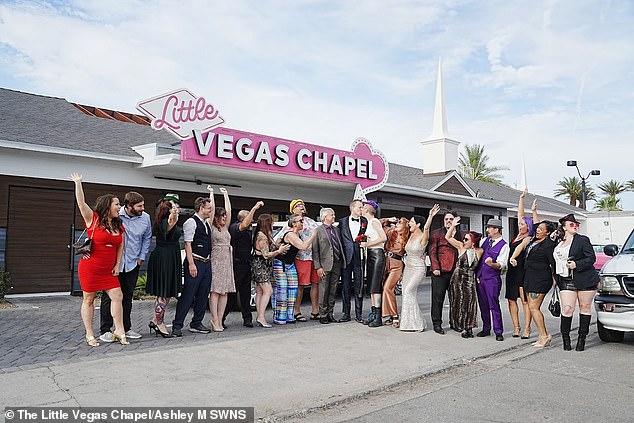 “Honestly, my partner and I are so silly and playful that the idea of ​​doing a wedding with Elvis is an absolute delight – it was an absolute blast.”

Ashley said the beauty of four weddings is that each one looks and feels very different.

She said: “I wore something different with each one.

“My spouse wore a gorgeous linen suit to the New York and Portland events, but for Vegas he went very over the top in a black and blue shiny suit.

“I had to wear three different beautiful outfits for all of this, they matched our venues and we had to sit down and create our individual playlists.

“I work in entertainment – I hosted all my events and chose the music for all of them.”

Ashley said she and Larry, a software developer, wanted to use the weddings as an opportunity to bring people together after Covid-19.

Ashley said: “It was an opportunity for us to see people ranging from children who have grown up in recent years to our family elders.”