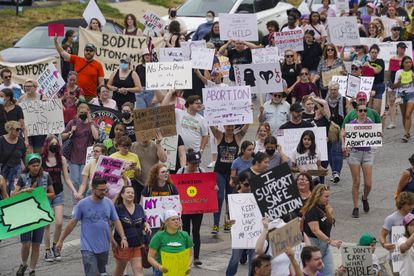 The US Supreme Court admitted Thursday that it could not identify the person who last year leaked nearly two months before publication that this court was preparing to limit abortion rights in an advisory opinion.

In an unsigned statement, the Supreme Court assures that all possible investigative avenues have been pursued and all necessary forensic analysis of the evidence has been carried out, but “the team has not yet been able to identify the person responsible.”

In a report accompanying the statement, Supreme Court Security Officer Gail Curley, who led the investigation, points out that during her investigation she interviewed 97 court officials, all of whom denied authorship of the leak. Curtley also thinks it’s unlikely that the document was obtained by hacking into the institution’s computer systems.

“Investigators continue to review and process certain electronic data and some reviews are pending. To the extent that these investigations uncover new leads or evidence, investigators will pursue them to the end,” the official said.

According to her, “a court clerk who disclosed the draft flagrantly violates a system fundamentally based on trust with few safeguards to regulate and limit access to highly sensitive information.”

The leak became known on May 30th. Digital Politico, which specializes in reporting on Washington’s balance of power, released a draft of the majority opinion of five of the Supreme Court’s nine justices. Written in February, the draft was signed by Samuel Alito, one of the institution’s conservative judges. His opinion was supported by Conservatives Amy Coney Barrett, Neil Gorsuch, Clarence Thomas and Brett Kavanaugh.

The message was a bombshell, the kind that will be remembered for years to come. The highest judiciary in the United States would seek to set aside the Roe v. Wade, which had guaranteed abortion rights nationwide since 1973.

Instead, the most conservative Supreme Court justices in eight decades have opted to let the 50 states decide whether or not to allow abortion in their jurisdictions, and under what conditions.

The final verdict on abortion rights was released on June 24. The contents of the leak have been confirmed. With the support of six judges to three, federal protection of abortion rights ended in a judgment known as the Dobbs against the Jackson Women’s Health Organization. Roberts himself was added to the five supporters of the February draft, who admitted that although he agreed with the content of the verdict, he had opted for a somewhat less radical measure. The three dissenting judges – Liberals Sonia Sotomayor, Elena Kagan and Stephen Breyer – issued an opinion that severely criticized the verdict.

After May’s leak, which was unprecedented for its depth and level of detail, the judges were furious. They had no qualms about calling it a “breach of confidentiality.” Supreme Court President John Roberts announced with great fanfare the start of the investigation he would lead von Curtley. If the leak, he proclaimed, was intended to “undermine our integrity, it will not succeed. Our work will not be affected in any way.”

The leak put American women at loggerheads. Thousands of abortion advocates took to the streets to protest. And when the verdict was officially confirmed, the protection of the right to voluntary abortion became one of the most important voting factors in the November 8 midterm election campaign.

In these elections, the Democratic Party in defense of this right achieved much better results than expected and was able to increase its control of the Senate. The Republican opposition, seeking a clear majority in both houses of Congress, had to be content with gaining control of the House by a slim majority.

Given the resulting electoral advantage for the Democrats, one might consider that the person who leaked the document might have been a sympathizer of this ideology. But he could also have been a conservative person who wanted to prevent judges from giving in.

The results of the inquiry were released just three days before the 50th anniversary of the Roe v. Wade published.

During the investigation, the Supreme Court also consulted Michael Chertoff, who was Secretary of Homeland Security during the administration of President George W. Bush (2001-2009). Chertoff has recommended several steps to strengthen information security in court, but makes no suggestions for continuing the internal investigation, which he says has probed every possible angle. “At the moment I can’t see any investigative measures that could make sense,” says the expert.