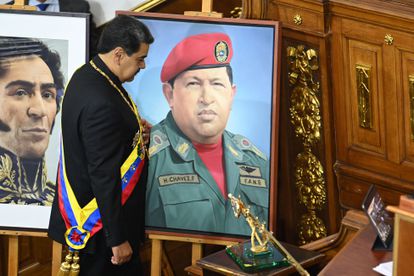 President Nicolás Maduro in his annual report to the nation in the assembly on January 12, 2023. YURI CORTEZ (AFP)

Meanwhile, Venezuela’s government and opposition should be discussing the date of the 2024 presidential election and the lifting of the disqualifications of some anti-Chaviist politicians. However, negotiations between the parties have reached an impasse as Venezuelan assets abroad were set to be released to fund a humanitarian aid fund to be managed by the UN. The money hasn’t circulated for now, and President Nicolás Maduro blames the United States for not doing enough about it. “The nervousness is great,” they claim from the negotiation.

The dialogue failed on the most important point, the political one. On Nov. 26, the parties agreed to set up the fund with foreign-held Venezuelan assets such as gold at the Bank of England or the Central Bank of Venezuela accounts in New York. This capital injection would greatly help the Maduro government, which would have resources to improve the country’s situation in the final stages of the elections, which are due to be held in the spring of next year. The problem is that this money has not yet been released. Some US officials are even warning that creditors will appear if this is done – Venezuela’s foreign debt is very high, even higher than the amount withheld. According to four sources consulted, the United States Ambassador to Venezuela, Jimmy Story, wrote a letter to the United Nations alerting the institution that something like this could happen.

The letter caused an earthquake in the negotiations. According to three different sources, the Chavista leader believes that Washington is not delivering on its promises and is not acting vigorously to free up large sums of money. Maduro believes he can release not only the dollars held on US soil, but also other amounts frozen by international White House sanctions. The government expects $5,000 million [unos 4.626 millones de euros], although the opposition lowers that number to 3,000. The situation is currently so delicate that Jorge Rodríguez, President of the Venezuelan National Assembly and Maduro’s right-hand man, and opponent Gerardo Blyde will meet in Caracas in the coming days. When the two leaders agreed in November to return to the negotiating table in Mexico, everything seemed geared towards reaching an agreement that would gradually resolve the Venezuelan crisis.

The setting seemed ideal. The United States wanted to allow Chevron to export Venezuelan oil and there was a prisoner exchange between the countries. French President Emmanuel Macron intervened and asked Maduro to organize elections in which the opposition had a real chance of taking power. Colombian President Gustavo Petro, currently the main supporter of Maduro’s return to the international stage in the region, had also been pushing in this direction. Petro has sought to bring Venezuela back to Latin American organizations, including human rights, and has insisted that Chavismo must return to what he calls liberal democracy. All international leaders had great confidence in this new dialogue, convinced that Chavismo wants to legitimize itself. Two months later, however, the negotiations have not progressed and there is a risk that they will drag on forever and produce no real results.

This stalemate brings back the ghosts of the recent past, as all attempts at negotiation by the Maduro government and opposition in recent years have been a resounding failure for one reason or another. It happened in the Dominican Republic, in Barbados, in the first round of talks in Mexico, and in the Vatican-sponsored rapprochement. North American sources are skeptical about Maduro’s urgencies. “When it comes to political issues, Chavismo always finds an excuse. They don’t really want to move forward,” they explain. Without an agreement, the situation remains stagnant and there is no sign of a solution. Meanwhile, nervousness dominates the dialogue table.