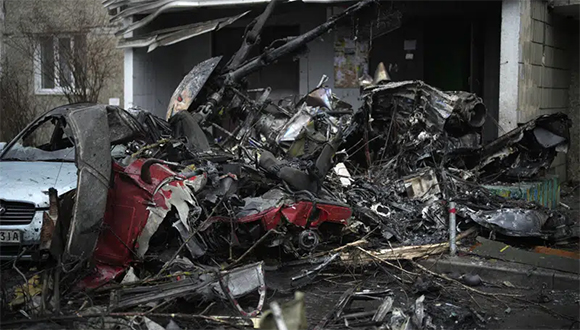 Remains of the crashed helicopter this Wednesday in Kyiv, the capital of Ukraine. Photo: AP.

A helicopter carrying Ukraine’s Interior Minister crashed in mid-fog near a kindergarten in a residential neighborhood in the Kiev region’s Brovary town on Wednesday, killing the official and at least 13 other people, including a child, who was in the vicinity.

The State Ambulance Service of Ukraine reported that at least 14 people were killed, nine of them on board the helicopter and a child on the ground. At least 25 injured are also reported, including 11 children.

The first official reports have given different death tolls, reaching 18 in total.

The National Police of Ukraine stated that five Interior Ministry officials were killed in the accident, including Deputy Minister Yevhen Yenin and Secretary of that Ministry Yuriy Lubkovych; a national police officer and three members of the helicopter crew.

Kyiv regional governor Oleksii Kuleba told Ukrainian TV that emergency services are still identifying remains and that the number of victims could increase.

Interior Minister Denys Monastyrskyi, who oversaw the country’s police and emergency services, is the most senior official to be killed since the war began nearly 11 months ago.

It was initially unknown whether the helicopter crash, which happened on a foggy morning in the eastern suburb of Brovary, was an accident or war-related. The Ukrainian authorities immediately launched an investigation.

Ukrainian President Vladimir Zelensky reiterated that the accident was widely related to the war while addressing the World Economic Forum in Davos, which is being held in Switzerland, via videoconference.

“This is no coincidence, because it is due to war, and war has many dimensions, not only on the battlefields,” he said after asking the Davos audience to stand for a minute’s silence in honor of the deceased. “In wartime there are no accidents. All of this is a consequence of the war.”

There have been no fighting in the Kyiv region recently, media reports noted.

In the same speech via conference call, Zelenskyy said the West should send more aid to his country and make decisions faster, while urging Western countries to supply Ukraine with air defense systems and tanks more quickly.

“It’s too early to talk about the reasons,” said Ukrainian Air Force spokesman Yuri Ignat, adding that an investigation could take at least several weeks.

“Unfortunately, as pilots say, the sky doesn’t forgive mistakes, but it’s too early to talk about the causes,” added Ignat. 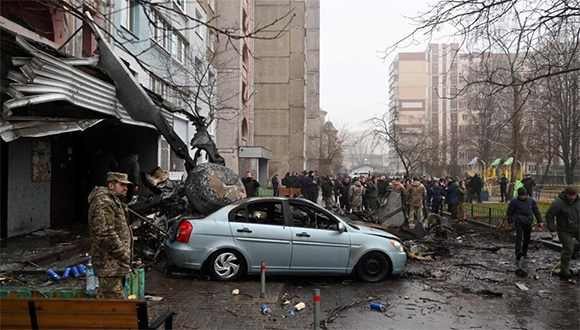 View of the spot where a helicopter crashed near a kindergarten and an apartment building in Brovary near Kyiv, capital of Ukraine, on January 18, 2023. Photo: AFP.

The Ukrainian security service is treating three possible hypotheses: a technical defect in the device, that the pilot did not comply with flight safety regulations, or that the act was intentional.

At the scene of the crime, debris lay over a children’s playground. Rescue workers rushed in a fleet of ambulances to get on with their work amid a rain-soaked location.

A new interior minister has already been appointed, said the head of the Ukrainian national police, Ihor Klymenko.

Ihor Klymenko, still in his role as a police officer, wrote on Facebook that the helicopter belonged to the State Ambulance Service of Ukraine. Other officials said it appears to be a French Eurocopter Super Puma.

The spokesman for the country’s air force, Yuri Ignat, specified that the Super Puma model helicopter was assigned to the state rescue service. He said that such devices have been handed over to all Ukrainian law enforcement agencies. 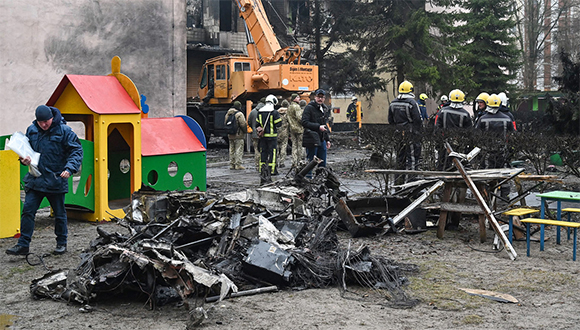 Firefighters near the scene of a helicopter crash near a kindergarten in the city of Brovary, Kyiv region, Ukraine, on January 18, 2023. Photo: AFP.

According to RT en Español, the modified model H225 (or EC 225) of the Super Puma 2018 helicopter that crashed this Wednesday was bought by the Ukrainian authorities in France.

In total, the delivery of 55 model H145, H125 and H225 helicopters was planned. According to the Strana.ua portal, Paris gave part of the total amount of 551 million euros to cover the purchase on credit.

The H225 model had a number of technical flaws, for which manufacturer Airbus Helicopters faced multiple lawsuits over “an inherent problem in the main gearbox,” trade magazine Vertical reported in 2016.

The media pointed out that the helicopters in question suffered a “catastrophic failure” that resulted in the separation of the main rotor from the fuselage.

These findings came after an H225 crashed off the coast of Norway in April 2016, killing 13 people. In a similar disaster in 2009, an AS332 L2 Super Puma model crashed off Scotland after a fuselage rotor separated. This tragedy killed 16 people.

Following the 2016 accident, civil aviation authorities in many countries including Norway, the UK and the US issued temporary flight bans on the H225 and AS332 L2 variants.

However, the restrictions were lifted in the summer of 2017 after Airbus Helicopters claimed to have made changes to the helicopters and their maintenance to address the deficiencies.

(With information from AP, Portal, AFP, RT in Spanish and BBC Mundo)