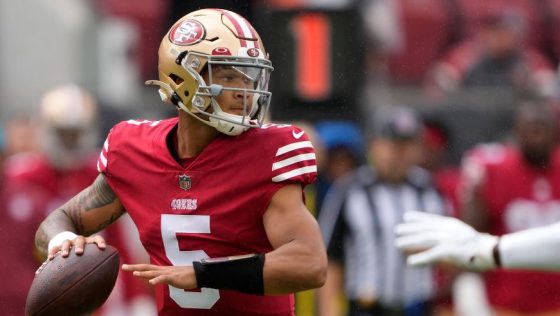 The news from Tennessee Tuesday was that Ran Carthon, director of player personnel for the 49ers, has become the Titans’ GM. Then came an interesting PS

49ers quarterback Trey Lance posted a photo of Carthon on his Instagram story. Below the picture were three thumbs-up emojis.

Whatever Lance is up to, it’s reasonable to wonder if Lance has his fingers crossed in hopes that Carthon will trade for Lance at his new job.

While that’s not the message Lance wanted to send, people will assume that’s what he meant. And, frankly, it would be hard to blame Lance for wanting out.

They went all out to get him in 2021, dedicating three first-round picks and one third-round pick to acquiring Lance. The expectations and the pressure became immense. And it feels like he’s never been fully embraced.

From sticking with Jimmy Garoppolo in 2021, to keeping Garoppolo in 2022, to the obvious fallout of Brock Purdy’s emergence, who could blame Lance for wanting to back out?

The Titans could be in the market for a quarterback in 2023. Ryan Tannehill has a $36.6 million cap and a $27 million base salary in the final year of his deal. The Titans may be considering their options.

Maybe Lance is one of them. Perhaps, based on his social media post about the team’s new GM, Lance is hoping it will be him.