Sending large quantities of hash hidden in coconuts, pineapples and other real fruits and vegetables is a method well known to law enforcement around the world. But shaping fruit from plastic and lacquered paper into packaging for hashballs, wrapping them and shipping them on pallets as if they were real quality tomatoes is something more exotic. The Civil Guard and National Police have seized 22,370 kilograms of cannabis resin disguised in thousands of units of counterfeit tomatoes (in reality just bright red paper) already ready to be shipped to France. The network was based in Cordoba, but virtually all the drugs were confiscated in Malaga, neatly arranged on pallets of shiny fake tomatoes.

Operation Califa Trucks began on January 10, when a van carrying 2,600 kilos of hash “spread in several boxes of fake tomatoes” was intercepted in Malaga. Although there was some actual fruit, most of the show consisted of pressed balls of hash resin, wrapped in food grade plastic and again wrapped in waxed patent leather and stamped with the logo of a fruit and vegetable company (called Lemon, with a drawing of some sort of demonic lemon ), according to sources from the Guardia Civil of Cordoba.

The agents went to the store of origin of the full tomatoes, also in the province of Malaga, where another 19,700 kilos of hash resin were found. “The drugs were hidden in 18 large pallets containing hash balls pretending to be tomatoes,” said a joint police and Guardia Civil statement released this morning. In this warehouse, two people who were hiding under a truck were arrested. 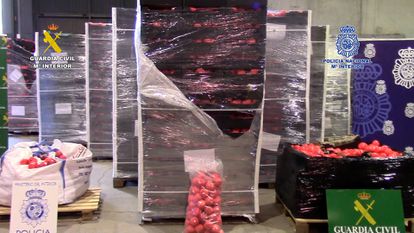 The pallets of fake tomatoes confiscated from a warehouse in Malaga.

Since the drug was already confiscated, the operation was initiated. The agents conducted four searches in Córdoba province, during which five people were arrested, including the organization’s alleged leader, whose identity has not been released. According to sources at the armed institute, this is “a well-known individual” who had created a hard core of trust while assigning others to higher-risk tasks. “The criminal organization had a complex structure, rich in human, technical and material resources and with strong economic capacity,” the note said.

The whole organization had the appearance of a legal corporation made up of smaller firms. The hard core uses “straw men” with no other responsibility than acting as managers of the companies used for the rental and/or acquisition of vehicles, real estate, they assert. There were also arrests in the province of Cádiz, where the drug made its way to Europe. 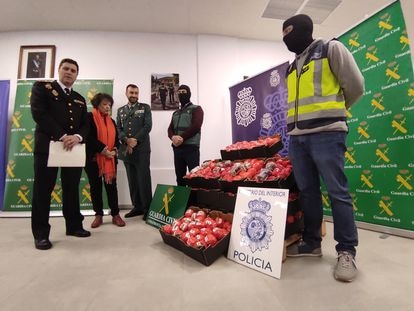 Hashish intervened as a fake tomato in Operation Califa Trucks, in the presence of the authorities and agents of the Civil Guard and the National Police. EUROPE PRESS