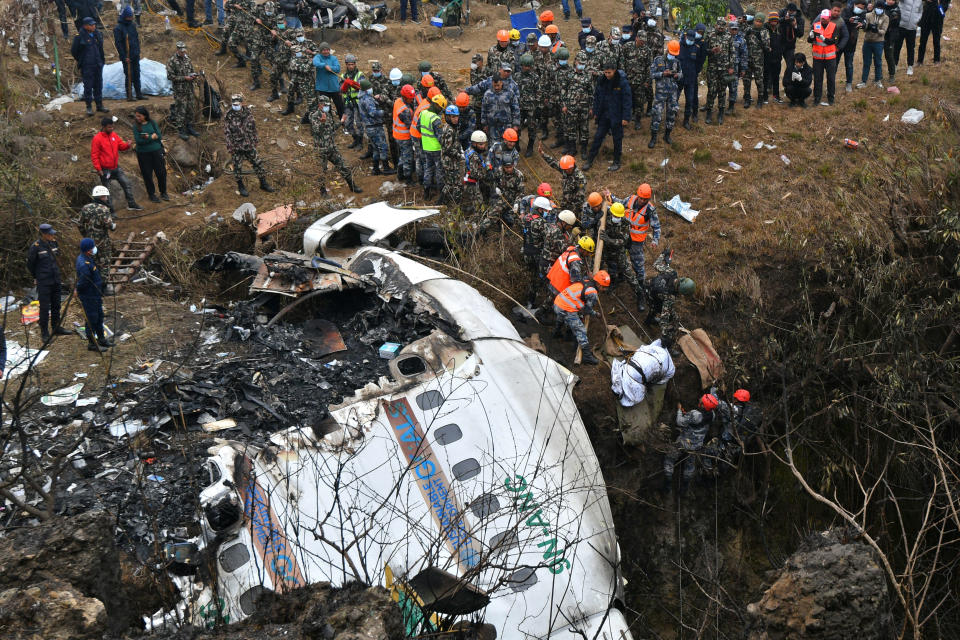 PRAKASH MATHEMA / AFP EDITORS’ NOTE: Graphical Content / Rescuers drag the body of a victim who died in a Yeti Airlines plane crash in Pokhara on Jan. 16, 2023. – Nepal marked a day of mourning on January 16 for the victims of the nation’s deadliest aviation disaster in three decades, which killed 67 people in the plane crash. (Photo by PRAKASH MATHEMA / AFP)

NEPAL – This is a horrifying coincidence in the dramatic history of the crash that killed 72 people in Nepal on Sunday, January 15. According to the Press Trust of India (PTI), the plane’s co-pilot, Anju Khatiwada, joined the Nepal civil aviation and Yeti Airlines company in 2010 after the death of her husband, who died in a small passenger plane accident same company. The accident happened in 2006, minutes before he landed.

“She did pilot training with insurance money after her husband died,” he added. Anju Khatiwada had 6,400 flight hours under his belt.

Anju Kathiwada’s body has not been identified

The body of Kamal KC, the pilot who had already flown almost 22,000 hours, was found and identified. The remains of Anju Kathiwada have not been identified. “She was at the controls of the plane with a flight instructor on Sunday, which is airline standard,” said a Yeti Airlines official who knew the co-pilot personally, The Guardian reported.

Nepalese hospital staff began delivering the bodies of victims of the crash, the country’s worst air disaster since 1992, to families this Tuesday, January 17.

The plane, a twin-engine ATR 72 operated by Nepalese company Yeti Airlines with 68 passengers and four crew members, crashed on Sunday while approaching Pokhara Airport in the center of the country.

Rescue workers have worked almost tirelessly since the accident to recover the human remains from between the wreckage of the plane and charred seats in a ravine. On this Tuesday morning, 70 bodies were found.