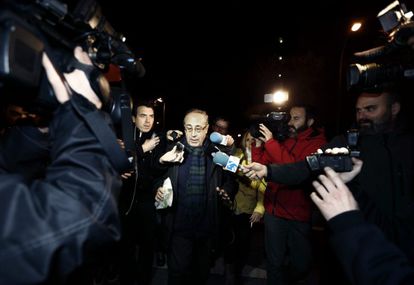 Bonuses for winnings given to third parties cannot be considered a criminal offence. Neither who pays nor who receives them. This is what the Supreme Court has found in a judgment in which it upholds the convictions of the nine defendants in the so-called Osasuna case, but slightly reduces their sentences because the winning bonuses agreed in this case are not punishable under criminal law. Yes, those are the rewards for losing, on the other hand. “A player can lose a match with his performance as a possible option, but not win it. And you can’t win it, because it doesn’t depend solely on your will, but on other factors. And what cannot be achieved voluntarily because it is impossible cannot be prosecuted either,” warns the BGH.

The Supreme Court intends to resolve disagreements between the courts over bonuses that promoted a third party win in favor of another team. In the first sentence in the Osasuna case, in April 2020 the Navarre Provincial Court convicted nine people – former Osasuna directors and two former Betis players – of agreeing to fix two games in the closing stages of the 2013-2014 season. The Navarrese team was on the verge of relegation and its directors contacted then-Betis players Antonio Amaya and Álex Torres and agreed to pay them €650,000 so they would beat Valladolid (who were also fighting to stay) and lose to Osasuna . The results were met, but the Pamplona team could not keep the category.

The Audiencia de Navarra verdict convicted nine of the 11 defendants on the bench on sports corruption charges, punishing them both for the bonuses they agreed for Betis to beat Valladolid and for those who agreed to them to lose to Osasuna. The convicted individuals appealed to the Supreme Court, and the court partially allowed their appeals, concluding that the bounty for winning cannot be punished as a crime, prompting them to reduce the penalties they had previously between one and eight years and eight months in prison. , and now there is between 10 months and 5 years and 10 months in prison. The highest sentence was handed out to former Osasuna manager Ángel María Vizcay, who was convicted of aggravated embezzlement, breach of trust and sports corruption. Former President Miguel Ángel Archando (5.5 years); former Vice President Juan Antonio Pascual Leache (4 years and 10 months); former director Jesús Peralta (5 years). The Treasurer Sancho Bandrés (4 years); two real estate agents, Cristina Valencia and Albert Nolla (6 months); and the two former Betis players involved (10 months).

In its resolution, the Supreme Court sets out how to interpret Article 286 of the Criminal Code, which “imposes penalties on the directors, administrators, employees or collaborators of a sports entity, regardless of its legal form, as well as athletes, referees or judges, in relation to conduct, aimed at intentionally and fraudulently predicting or altering the outcome of a test, meeting or sporting competition of particular importance”. Although this commandment in its literal meaning does not exclude the bonus for winning a game or limit the crime to getting lost, the Court is of the opinion that it is to be understood in this way. “The duty of every athlete is to go out and win a game, so it would not be logical that the bonuses for doing his duty would be criminally typical. No one would understand that seeing some players playing “well or very well” on the pitch or on the tennis court could be a criminal offense, even if such behavior was the result of an Extra Sports Bonus is. It is not the bonus that is punished here, but the behavior on the field,” says the judgment, for which judge Julián Sánchez Melgar was the rapporteur.

The opposite is true of the loser’s bonuses, which, according to the court, are punishable from the moment they are agreed, regardless of the end result. “The winning behavior, also financially supported by the bonus, is what every athlete needs to monitor; while losing is itself anomalous because it is fraudulent and inappropriate.”

The decision of the Supreme Court does not affect the administrative rules for premiums. The Court itself points out that if the winning bonuses are considered reprehensible, this punishment must be limited to administrative law, with sanctions such as those provided for by the Sports Code, the League Statutes or the RFEF Sport Discipline Code.