The European Space Agency’s (ESA) spacecraft Gaia has made a chilling prediction that our sun is nearly halfway through its lifespan and when it reaches the end it will swell and obliterate our planet – but data from the spacecraft suggests that this will not happen for at least another five billion years.

Gaia determined that the Sun is approximately 4.57 billion years old, and by determining its mass and composition, the device estimated how the Sun will evolve in the future.

The road to its demise begins at around 10 to 11 billion years of age, when it becomes a red giant and rapidly increases in size significantly.

From here the Sun races to its death, ending up as a cool, faint white dwarf — the hot, dense core of a dead star.

At the moment, the Sun is considered “middle-aged” and stable as it fuses hydrogen into helium.

The European Space Agency’s (ESA) Gaia spacecraft determined that our Sun is 4.57 billion years old and thought it to be middle-aged

Located about 930,000 miles from Earth, Gaia carries two telescopes to document the galaxy, along with studying stars to predict its future.

And although people have long believed the sun will soon swallow the Earth, the latest data from ESA allays those fears.

Our planet is not doomed when the sun turns eight billion years old, as Gaia has determined that this is when it will reach a maximum temperature.

At least two billion years later, the sun will begin to cool and grow in size to more than double its current size. It measures approximately 846,000 miles across.

Orlagh Creevey, an astronomer in France who works with Gaia, explained that finding stars similar to our sun is important so we can understand how they fit into the universe. The road to its demise begins at around 10 to 11 billion years of age, when it becomes a red giant and rapidly increases in size significantly. From here the Sun races to its death, ending up as a cool, faint white dwarf — the hot, dense core of a dead star

“If we don’t understand our own Sun – and there are many things we don’t know about it – how can we expect to understand all the other stars that make up our beautiful galaxy,” he said in a statement.

“It’s a source of some irony that the Sun is our closest, best-studied star, but its proximity forces us to study it with vastly different telescopes and instruments than those we use to look at the rest of the stars. “

Earth’s sun contains a large amount of iron, making it burn brighter than other stars.

‘By identifying similar stars to the Sun, but this time of similar age, we can close this observational gap,’ the researchers said.

The sun has been making headlines lately for its explosive activity.

This stream, known as coronal mass ejection (CME), erupted from sunspot AR3078 on Monday and then engulfed an earlier ejection released the day before — mistaking it for a cannibal. It became a “hodgepodge of both” with tangled magnetic fields and compressed plasma, highly ionized gas known to cause powerful geomagnetic storms. Our planet is not doomed when the sun turns eight billion years old, as Gaia has determined that this is when it will reach a maximum temperature

CMEs can eject billions of tons of corona material from the Sun’s surface. The material consists of plasma and magnetic field.

Such flares have the potential to trigger space weather that can disrupt satellites and power grids on Earth, and be harmful to unprotected astronauts.

Aurorae were observed on July 19 after a solar storm hit Earth, producing electric greens and purples in the northern United States and Canada.

Shortly thereafter, on August 3, there was another solar storm warning.

There was also a C9.3 flare that burst out of the Sun this Sunday but did not erupt on the Earth-facing side of the Sun.

However, it generated enough excitement to be captured by NASA’s Solar Dynamics Observatory – a spacecraft that has been studying our massive star since its launch in 2010.

Mike Cook, who works in space weather, told that there was a coronal hole in the southwestern region of the sun’s face that was spewing “gaseous material”.

This increased solar wind speeds by shooting solar winds into a stream.

The Sun’s recent increase in activity is the result of its approaching the most active phase in its 11-year solar cycle – reaching peak activity in 2024.

Studies have shown that the current level of solar activity is about the same as it was 11 years ago, during the same point in the last cycle.

WHAT IS THE EUROPEAN SPACE GAIA PROBE AND WHAT IS IT DESIGNED FOR?

Gaia is an ambitious mission to draw a three-dimensional map of our galaxy, the Milky Way, revealing its composition, formation and evolution.

Since its launch by the European Space Agency (ESA) in December 2013, Gaia orbits the Sun almost a million miles beyond Earth’s orbit.

During its journey, the probe has quietly captured images of the Milky Way and identified stars from smaller galaxies that were long ago swallowed up by our own.

Tens of thousands of previously undiscovered objects are set to be discovered by Gaia, including asteroids that could one day threaten Earth, planets orbiting nearby stars, and exploding supernovae. 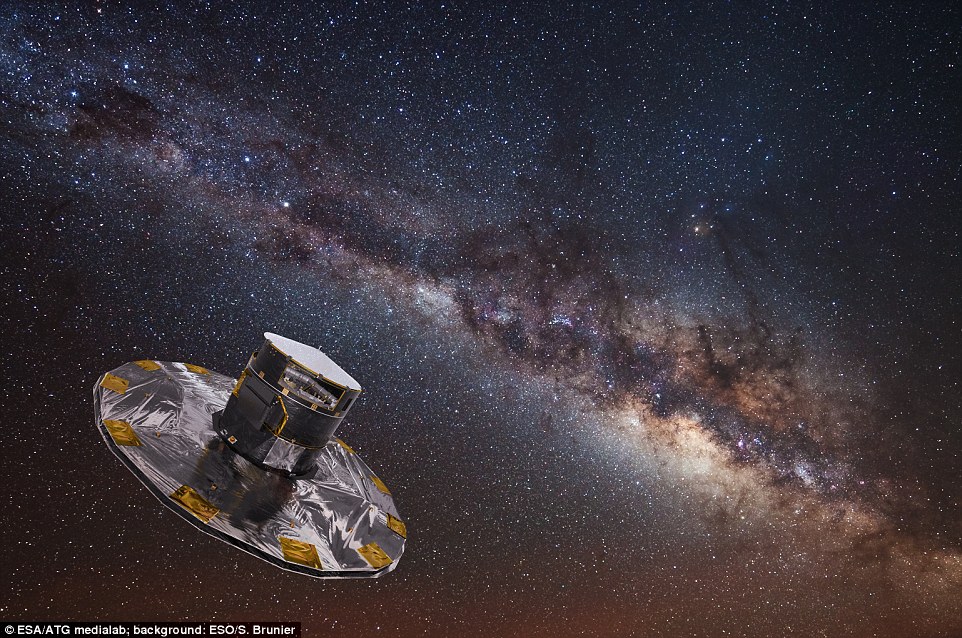 Astrophysicists also hope to learn more about the distribution of dark matter, the invisible substance thought to hold together the observable universe.

They also plan to test Albert Einstein’s general theory of relativity by observing how light is deflected by the sun and its planets.

The satellite’s billion-pixel camera, the largest ever in space, is so powerful it could measure the diameter of a human hair 621 miles (1,000 km) away.

This means that nearby stars have been located with unprecedented accuracy.

Gaia maps the position of the Milky Way’s stars in a number of ways. 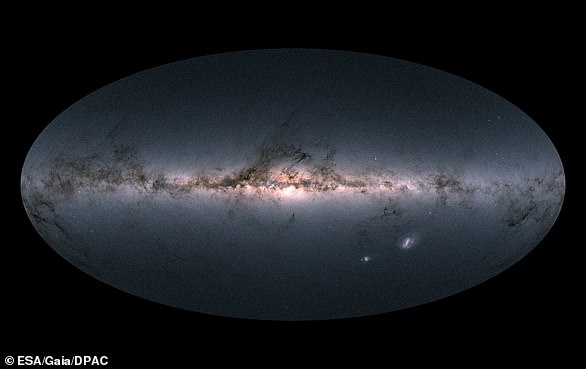 Gaia’s all-sky view of our Milky Way and neighboring galaxies, based on measurements from nearly 1.7 billion stars. The map shows the total magnitude and color of stars observed by ESA’s satellite in each part of the sky between July 2014 and May 2016. Brighter regions indicate denser concentrations of particularly bright stars, while darker regions correspond to less bright areas of the sky where stars are observed. The color representation is obtained by combining the total amount of light with the amount of blue and red light recorded by Gaia in each patch of the sky.

It pinpoints the position of the stars, but the probe can also record their movement by scanning each star about 70 times.

This allows scientists to calculate the distance between Earth and each star, which is a crucial measure.

In September 2016, ESA released the first series of data collected from Gaia, containing information on the brightness and position of over a billion stars.

In April 2018, this was expanded to include high-precision measurements of nearly 1.7 billion stars.