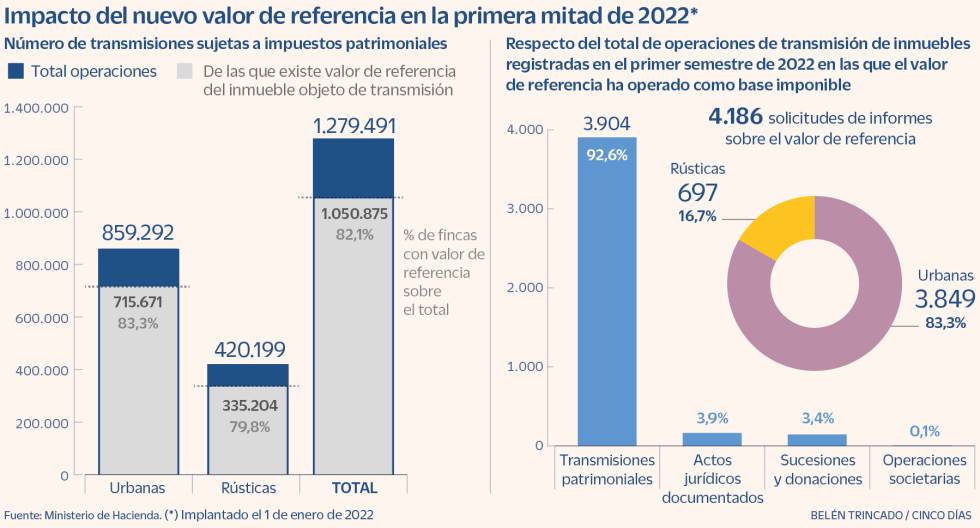 As of January 1, 2022, Spain has a new home ownership benchmark that sets the tax base for property taxes related to transactions such as purchases, inheritances or gifts. The reason for this tax assessment, which according to initial data has achieved its objective, was to update the actual value of the properties in order to prevent transfers from taxing amounts that are falsified and far removed from the market value. The new reference created a lot of noise and doubts about its effectiveness. However, the first six months of application leave a more than favorable record: only 0.4% of taxable establishments have received correction requests to determine whether an adjustment was necessary.

In the first half of 2022, just over a million operations were registered in Spain that had the new reference value as their tax base. However, the General Directorate of Cadastre, which reports to the Treasury, has only received 4,186 requests for mandatory and mandatory reports, which taxpayers must request the ministry to determine if it is necessary to make adjustments in a specific property. In other words, 99.6% of the operations validated the tax value established by the cadastre.

This balance has two interpretations, according to Rocío García Ramírez, technical director for real estate taxation at Euro-Funding. “Either the new reference value is higher than the market value, but the difference is so small that it is not worth claiming, or the new reference value is adjusted to the real value, which is the most common.” However, the consequences are the same: “The vast majority of taxpayers have accepted to settle with the reference value on their farms”, which “reduces undeclared payments and ends the litigation derived from possible claims”.

The reference value should theoretically be 90% of the market value of the house. In other words, if a house costs 200,000 euros, it will have to pay at least 180,000 euros in taxes in these transactions, neutralizing the relatively common practice of deeding below fair value in order to pay less tax.

Of those 4,186 review requests, 92.6% were related to property transfer tax (ITP), the tax paid when buying a used home. The rest comes from inheritance and gift tax (ISD), tax on notarized deeds (AJD) and corporate activity, according to data released by the Treasury Department as part of the assessment of the impact of the Tax Fraud Act recently released by the department at directed by María Jesús Montero.

Behind all these figures, according to Manuel Esclapez, a member of the Expert Group on Local Finance and Cadastral Valuation at the Spanish Tax Advisors Association (Aedaf), is another derivative. “It should be borne in mind that the possibility of challenging the benchmarks is provided through a self-assessment correction, which has a four-year term.” to open.”

The Aedaf expert also doubts the impact of this measure on reducing fraud. The reason, he adds, is that someone looking to cheat can pay taxes on the reference value, which is usually lower than market value, and pay the rest of the transaction in black. It should be remembered, adds García Ramírez, that setting this new value avoids any subsequent verification. And he confirms that “we saw some errors in the reference values, but most of them are due to not reaching that 90%,” he points out.

For each area demarcated on the Spanish map, the new reference system determines the value of the average home in that area. This allows, the Treasury explains in the report, for any citizen to consult the tax file at any time and, in the event of disagreement, “urge the relevant cadastral procedures to amend it, avoiding potential future litigation.”

The ministry also ensures that the new method will reduce litigation by objectifying the calculation of the tax base, strengthening legal certainty and improving homogeneity in determining values ​​across the national territory, thereby avoiding comparative complaints.

However, the data should be viewed with a degree of caution. Cadastral sources celebrate that “the number of report requests represents a very insignificant percentage of the number of transmissions produced in the period to which it relates.” However, they add: “Given the short time that has passed since the introduction of the reference value for its use in determining the tax base of these taxes and the different circumstances that may arise in the tax administration of the Autonomous Communities, no definitive conclusions can be drawn will.

The Treasury itself is reticent in the document. “The reference value was introduced on January 1, 2022, so less than a year has passed since its publication and impact on the tax base” of certain taxes. This, together with the deadlines set out in the tax administration procedures for a possible correction, means that a “fully final assessment of the reform” is not possible.

In the months leading up to the approval of the new value, the Aedaf, the Fundación Impuestos y Competitividad and the FIDE Foundation warned of the possible risks of the new method, citing a tax increase, lack of singularity, the inclusion of real estate factors in valuations, ambiguity in their formation process and a possible lien on non-existent property.