María Ángela Olguín, 16, disappeared in front of hundreds of people in Indios Verdes and nobody saw anything. Neither the man who sells jackets, nor the woman who serves flavored water, nor the man from the tlapalería; A camera on one of those panic buttons that the Minister for Citizen Security had installed all over the capital didn’t record anything either. “The camera hasn’t been usable for a long time,” says a police officer.

Olguín arrived with his mother at the whereabouts of Indios Verdes after 5 p.m. this Thursday. They had arranged for their father to go look for them. While waiting around 5:20 p.m., the mother decided to go to a public toilet next to the Metrobús station, but there was a small line and she had to wait between five and 10 minutes, she says. Her daughter was waiting for her at the metal door outside the bathrooms. When the woman left around 5:30 p.m., the girl was gone. “My daughter was gone,” Ms. Bustamante tells this newspaper. All he remembers is hearing his daughter call out, “Amá!” and since then those minutes have become his worst nightmare. “We are desperate, please help us,” says Rocío Bustamante. Jesús Olguín, the father, says that as soon as he disappeared they dialed his mobile number, but it was already switched off.

Indios Verdes, north of the city, is one of the liveliest spots in the capital due to its proximity to the state of Mexico. Olguín and his family hail from Ecatepec, one of the country’s most insecure communities, especially for women. The Metro, the Metrobús, the Cablebús, several bus lines and just as many station wagons or vans pass through this station. Every day millions of people take a bus or get off at Indios Verdes. An impromptu market was created around the lines, a huge maze of screens and stalls that is easy to get lost in if you don’t know the place. This Friday, more than 24 hours after her disappearance, relatives, friends and dealers who agreed to put up posters with the girl’s face repeated the same question: “Where is Ángela?”

The Mexico City public prosecutor’s office has created an investigation folder to clarify the facts and is compiling videos that provide information about what happened on Thursday afternoon. In one of these images, captured by a C5 camera that captured the location from a distance, the parents say they can see a man kidnapping their daughter. “You see someone walking up to you and taking you away. He’s a man,” says the mother. “He comes out from between the stalls and takes her with him,” repeats the father. To complete the information, authorities have asked vendors near the toilets to provide footage from their cameras. However, Olguín complains that some posts do not work together. “They say they have no pictures from that day, the cameras aren’t working and others have removed the cameras they had installed,” she protests, adding, “My daughter’s life depends on these pictures.” 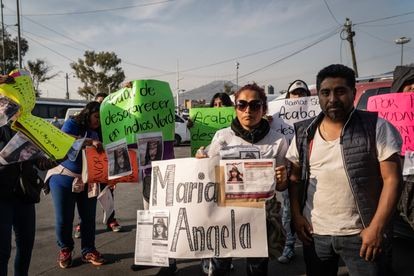 A worker from a nearby position assures that the camera he has is only used to record when he is not in the shop and that he only sometimes records if he activates it through the application called DMSS on his mobile phone. “I already told the police who came this morning,” he says. The last recordings in the application are from the day of the disappearance, but correspond to 8:00 p.m. and 10:00 p.m. Beyond that there is nothing. His post is right next to Angela’s disappearance. “I didn’t see anything out of the ordinary, a lot of people pass by here getting off the Metrobus,” he replies.

The bathroom attendant didn’t see anything either, although the woman admits she saw Ángela waiting for her mother outside. “When the mother came in, the girl was there, but not anymore when someone came up to her because they asked me for paper and water and I went in,” the employee replies.

The girl was wearing navy blue pants, a gray shirt with blue letters and white sneakers at the time of her disappearance. She wore glasses, her hair was pinned up and she has a nose ring. His mother adds: “He also has one on his belly button, a tattoo of a small heart on his left hand and a scar on his right leg from a dog bite.”

After 24 hours of disappearance, the Olguín family has again called for a demonstration on social media in the place where the girl disappeared. Hours later, they blocked the Mexico-Pachuca highway at La Virgen, causing delays of more than four hours. Her three sisters, friends, family and classmates from high school have gradually arrived. At any given time, about twenty people, including police officers and elements of the Citizen Security Secretariat, monitored the demonstration. “What are you standing there for? Move, find my sister,” the 21-year-old older sister shouted angrily. 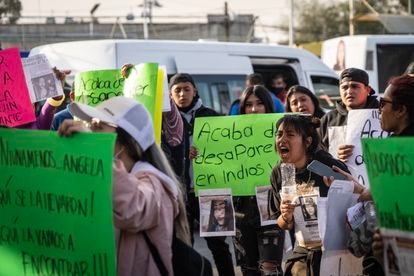 One of Ángela Olguín’s sisters is part of a demonstration at the same place where her sister disappeared: Nayeli Cruz

The banners featured some messages of support such as: “Not one less, they brought her here, we will find her here” and “Please help us find Ángela Olguín”. Amid the outrage and anger, her mother also cried out in despair: “I’m a mother in love with my daughters and I’m missing half of my heart. I’ll fight for her, I want her to live,” she said before, broken pain while her daughter Elizabeth repeated, “Because they took her alive, we want her alive.”

In less than 24 hours, two other girls have disappeared from the same town hall: Gustavo A. Madero, Tonatzin Blanco, 11, who disappeared while playing in the street with some friends, and Gabriela Giselle Cabrera, 14. The latter was wearing her school uniform. “I feel powerless because I can’t do it anymore,” says Ángela’s father after hours of blocking traffic. “Only such authorities pay attention to us,” he says.

Ms. Rocío says she hopes to see her daughter again and sends her a final message if she’s listening: “My daughter, know that we are all looking for you. Fight, my daughter, fight as I taught you. Do your best to be noticed, ask for help. daughter fight. Loving You”.

More than 100,000 people have disappeared in Mexico in the last decade.