While the European Parliament debated in Strasbourg how it could improve its practices to regain public confidence in the wake of the European Parliament bribery scandal, allegedly by Qatar and Morocco, the main suspect in the plot, former Italian MEP Pier Antonio Panzeri, voted , in Brussels on Tuesday to tell the Belgian courts everything. According to Belgian federal prosecutors, Panzeri has signed a “repentance agreement” in which he agrees to reveal the secrets of Qatargate, the plot that rocked the European institutions, in exchange for a limited prison sentence.

Panzeri, believed to be the ringleader of the conspiracy and president of the NGO Fight Against Impunity, which the probe believes was used to channel the bribes, “has promised to make meaningful, insightful, candid and comprehensive statements” about Qatargate the statement issued by the prosecutor.

On the same day came the news that Panzeri should appeal to a Belgian court against the decision to take him over the scandal involving a raid on 9 to the Italian, then Vice-President of the European Parliament – ​​there are 14 –, the Greek Eva Kaili ; his partner and parliamentary assistant Francesco Giorgi, and by Niccolo Figa-Talamanca, director of an Italian NGO linked to the conspiracy, for which countries such as Qatar and Morocco are suspected to be the alleged participants in exchange for promoting resolutions and action have paid the Eurocámara in their favor or to stop the refusals. The four are accused of corruption, money laundering and criminal organization and are currently in preventive detention.

Finally, on Tuesday, Panzeri did not appear before the judge who was supposed to review his situation, although his lawyer Laurent Kennes did, who avoided speaking to the press except to once again denounce the leaked investigation to the Belgians. Former Vice President Kaili has scheduled a hearing for Thursday when a judge will decide whether she remains in prison as ordered at the end of December or whether she can be released on parole.

Rather than appeal his arrest, Panzeri signed an agreement with the Belgian courts on Tuesday in which he pledged to inform investigators about the modus operandi, the financial arrangements with third countries, the financial structure created, the beneficiaries of these structures and the involvement In return, the court is willing to give Panzeri a firm but “limited” prison sentence, with all property illegally acquired through Qatargate confiscated according to the public prosecutor’s office to at least one million euros. 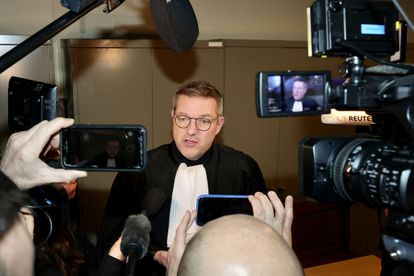 Laurent Kennes, lawyer for former MEP Pier Antonio Panzeri, addresses the media ahead of a court hearing on Tuesday at the Palace of Justice in Brussels. Olivier Matthys (AP)

Qatargate has rocked EU institutions trying to rush into a scandal that has tarnished their image. This Tuesday, Home Affairs Commissioner Ylva Johansson noted that the community executive is finalizing a proposal to set up a common ethics body for all European institutions and is also pushing ahead with a plan to try to unify the crime of corruption across the 27 member states. “Courts and police must be given all the tools to prosecute corruption,” he stressed at the plenary session of the European Parliament in Strasbourg. There he pointed out that the proposals put forward by the President of Eurocámara. In order to bring more transparency to the institution and to avoid a repetition of cases like that of Eva Kaili and former MEP Panzeri, they are not entirely sufficient. “They are a good start but more needs to be done,” he said.

This is the second time that an agreement of this type has been brought before Belgian courts since the so-called “Pentiti law” (repentance in Italian, referring to the Italian anti-mafia law) was passed in 2018. . On Monday, the plenary session of the European Parliament in Strasbourg approved the opening of the process to lift the immunity of two other MEPs that the Belgian judiciary wants to investigate over the scandal, Italian Andrea Cozzolino and Belgian Marc Tarabella; both from the Socialist and Democrat (S&D) group, as did the rest of the conspiracy.

Belgian newspaper L’Echo claims that Panzeri has admitted paying more than 120,000 euros in cash to Tarabella, who has so far denied any involvement. The MEP was vice-president of the delegation for the Arab countries and a member of the Pegasus Commission, which is handling the case of government espionage with the controversial software, in which Morocco is suspected of espionage by members of the Spanish government, among others, until his resignation due to the scandal .

Her name has appeared in the investigation files since the beginning of the plot: a day after the arrest of Panzeri, Kaili and the other defendants – from whom 1.5 million euros in cash were seized – the President of the European Parliament, Roberta Metsola, had arrested urgently returning to Brussels from their home country of Malta to validate the registration of Tarabella’s address, as required by Belgian law. According to initial information, however, no cash was found in the house, unlike in the houses of the former MEP and the MEP’s vice-president, who were quickly dismissed and whose successor must be elected in Strasbourg this Wednesday.

The pressure around Panzeri had increased with the arrests of his wife and daughter in Italy, who were suspected of involvement in the bribery scheme. Just this Monday, a court in Brescia, northern Italy, accepted the extradition to Belgium of Silvia Panzeri, the 38-year-old daughter of the former MEP, after giving the green light in December to transfer the detainee to Brussels Ms Maria Colleoni, who opposed appealed the decision. Both have been under house arrest since December 10th.

Before Panzeri, Francesco Giorgi had already admitted during interrogations to having taken part in the bribery scheme set up around the former Italian socialist MEP and the NGO Fight Impunity, which he founded in 2019 when he left his seat, apparently around it to use to screen their illegal transactions with third countries.