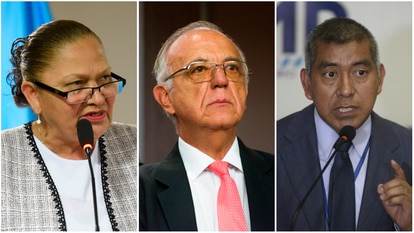 Tensions between the governments of Guatemala and Colombia are increasing. This Monday, the Central American country’s public prosecutor’s office announced that it was launching an investigation into the Odebrecht case against current Colombian Defense Minister Iván Velázquez, who headed the International Commission Against Impunity in Guatemala between 2013 and 2017. President Petro immediately reacted to the news and questioned the validity of this court decision against his minister. “We will defend him, he will continue to be our minister. If Guatemala insists on only jailing men, then we have nothing to do with Guatemala,” said the President, who also announced that he would call the Colombian Ambassador to Guatemala, Victoria González Ariza, for consultations. The government of Guatemala returned the message with equal hostility on Tuesday.

“The Ministry of Foreign Relations rejects the outburst by the Colombian government towards the Guatemalan judiciary in response to nearly 200 years of fraternal relations between Colombia and Guatemala,” read a brief statement from the Ministry of Foreign Relations announcing the move They will also call your ambassador for inquiries. “The Ministry of Foreign Affairs regrets that the Colombian government is turning a legal issue into a political one, taking abrupt decisions without following the appropriate diplomatic steps. With that in mind, we have mutually decided to call the Guatemalan Ambassador to Colombia for consultations.”

Adding to the diplomatic row was US Undersecretary for the Western Hemisphere, Brian Nichols, who expressed concerns about the rule of law in the Central American country. Nichols did not mention the Velásquez case, but rather the arrest warrants that the Guatemalan prosecutor’s office also issued against other anti-corruption investigators: Thelma Aldana (former Attorney General); Mayra Véliz (former Secretary of State); David Gaitán (former CICIG President), Pablo Carrasco (lawyer and former Odebrecht advisor). “Concerned about the arrest warrants issued by the Guatemalan Ministry of State against those who worked to ensure accountability for corruption in the Odebrecht case in Guatemala. Such actions undermine the rule of law and trust in the Guatemalan judicial system,” he wrote on his Twitter account.

Disturbed by @MPguatemala‘s arrest warrants for people working to ensure accountability for corruption in the Odebrecht case in Guatemala. Such actions undermine the rule of law and trust in Guatemala’s judicial system.

The credibility of the Guatemalan judiciary is in question. The warrants and the investigation into Velázquez were announced in June 2022 by prosecutor Rafael Curruchiche, one of the people put on the “Angel List” by the United States. It is a North American government list of individuals who have “threatened democratic institutions or processes, engaged in significant acts of corruption, or obstructed investigations related to such acts of corruption in Guatemala, Honduras and El Salvador.” Among those charged is prosecutor Curruchiche, who is accused of “obstructing investigations into acts of corruption and disrupting high-profile proceedings against government officials.”

Also in the crosshairs of the United States is the head of Curruchinche, the Attorney General of Guatemala named Consuelo Porras. The US State Department included her on a list of “corrupt and undemocratic” actors in 2021 for her constant obstruction of justice. However, Porras had the support of Guatemalan President Alejandro Giammattei, who last year renewed her for four more years as attorney general. Given the allegations from the United States, Giammattei was unconcerned. “The media or political allegations that may exist under our constitution have no value in depriving a person of their ability, suitability and honesty,” he said in defense of Porras at the time.

Current affairs analysis and the best stories from Colombia, delivered to your inbox every week

Subscribe here to the EL PAÍS newsletter on Colombia and receive all the latest information about the country.