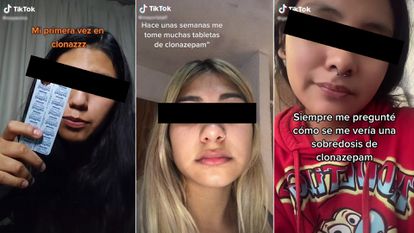 The “clonazepam challenge” or “whoever sleeps last wins,” a challenge that has gone viral on TikTok, has alarmed authorities in Mexico City since early January, when they warned of the dangers of following such a trend ” the lives of minors. In the last 48 hours, eight Mexican students (five in the capital and three from Nuevo León) have been poisoned in their respective schools with anxiolytics, drugs with sedative effects that require a prescription.

Authorities present the challenge as a fight against the effects of anxiolytic sedatives. Adolescents introduce anxiolytics to school, take them and wait for their effects. The winner of the challenge, as the name suggests, is the last to fall asleep.

The trend uncovered by the authorities has reached several locations in Mexican territory. In Mexico City, paramedics from the Rescue and Emergency Medical Squad (ERUM) treated eight students at the Francisco I. Madero School in the San Rafael neighborhood this Thursday. Of them, five were confirmed to have “possible poisoning,” three of whom were hospitalized as a precaution. Authorities have reported that the minors are stable. In San Nicolás de los Garza, a municipality in Nuevo León, this time the challenge was carried out by three students from the Juventino Rosas school. The result: the three minors were intoxicated by the consumption of anxiolytics.

The viral challenge has reached other states in Mexico since early January. Also on the 9th, seven students at a school in Veracruz got drunk after using these types of drugs. State Governor Cuitláhuac García reported that the youths were in possession of 30 clonazepam pills and announced that law enforcement would investigate the situation with a view to punishing those responsible.

Mexico City’s cybernetic police, which is responsible for monitoring and conducting “patrols” over the Internet, issued an update earlier this month on the risk of conducting these and other challenges common on the Internet. In 2022, the agency identified around 500 incidents stemming from this type of challenge involving Mexican minors. Despite the fact that the warnings were repeated by the various authorities, this newspaper did not find any Tiktoks with the characteristics described by the Cyber ​​Police. Despite this, the hashtag “clonazepam” (#clonazepam) has 82 million views.