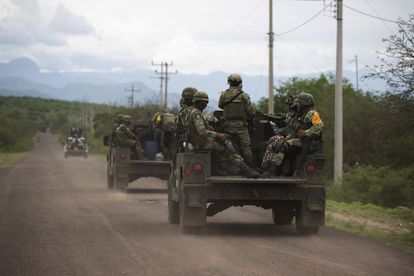 In a file image, Army vehicles patrol a highway in Durango in July 2021. Marco Ugarte (AP)

El licenciado, or El G1 as Gerardo Soberanes Ortiz was known, a financial player with a relevant position in the Sinaloa Cartel’s command system. Luis Cresencio Sandoval, Mexican Defense Minister (Sedena), announced his arrest this Friday following a joint operation by Sedena and the National Guard. Several helicopters and dozens of troops arrived at dawn at the home where Ortiz was located in the El Cortijo subdivision, a luxury residential neighborhood in Durango. After the clashes between the security forces and the Ortiz hitmen, Sandoval has reported the existence of a hitman who was injured in an arm.

In the Sinaloa Cartel organizational chart drawn up by Sedena, El Licenciado is in the third hierarchical line. He corresponds to brothers Jose Luis and Alejandro Cabrera Sarabia. This family rose to the forefront of the drug trade by shipping tons of heroin to the United States. They befriended the Sinaloa Cartel thanks to their ability to forge relationships with Durango and Chihuahuan politicians, thereby protecting the smooth movement of substances through that region. Their leader, Felipe, was arrested in December 2011.

The Cabrera Sarabia family has direct contact with Ismael El Mayo Zambada, one of the major drug traffickers in Mexico, who is 75 years old and has been in the drug business for more than 50 years and has never been arrested by the authorities. The US has offered a $15 million reward for any information that could lead to the drug dealer’s capture. After the arrest of Joaquín El Chapo Guzmán, El Mayo remained the top leader of the Sinaloa Cartel, one of the main drug trafficking organizations in Mexico.

In 2010, journalist Julio Scherer received an invitation to interview the drug dealer at his home, “a rustic building,” the journalist said. El Mayo began dealing drugs at the age of 16 and has survived in the arena longer than any of his partners, who have gradually succumbed to security forces. Rumor has it that this old drug dealer lives a secluded life in the mountains of northern Mexico and rarely visits the city. His reclusive nature and ability to avoid pomp have allowed him to remain hidden all these years.