At least 15 people died in a helicopter crash near the Ukrainian capital Kyiv. The dead also include Interior Minister Denys Monastyrskyj, his first deputy and secretary of state at the ministry. According to official information, there were nine people on board the French machine “Super Puma”, and six more people died on the ground, including three children. The cause of the accident is not clear.

According to the information, the helicopter crashed in the morning in the town of Brovary, a few kilometers northeast of Kyiv, near a kindergarten and a residential building. “In the accident in Brovary, the leadership of the Ministry of Internal Affairs of Ukraine was killed. They were in the helicopter of the state rescue service,” said police chief Ihor Klymenko. 29 people were injured, including 15 children.

Ukrainian President Volodymyr Zelenskyy called the accident “a terrible tragedy” that caused “unspeakable pain”. The exact number of victims will be determined. “I instructed the Security Service of Ukraine to find out all the circumstances of what happened in cooperation with the National Police of Ukraine and other authorized bodies,” Zelensky said. He expresses his condolences to the friends and family of the victims. “Three children died this minute. The pain is indescribable.”

Regional governor Oleksiy Kuleba wrote in Telegram that at the time of the tragedy, children and employees were in the kindergarten. Several bodies wrapped in shrouds lay in a yard near the damaged nursery. Debris was strewn across a playground. Rescuers were on site. Videos on internet platforms previously showed a burning building and people screaming. The Ukrainian side did not say whether there were Russian attacks in the area at the time of the crash. Russia initially did not comment on the accident. 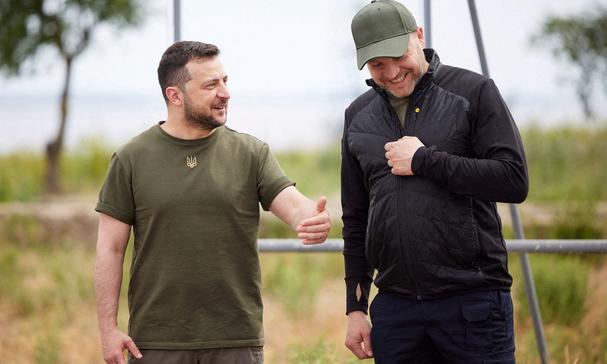 Monastyrskyj was appointed Minister of the Interior by President Zelenskyy in 2021. He was responsible for police and internal security in this office and is the highest-ranking Ukrainian official who has died since the start of the war.

The first condolences came immediately from Brussels: EU Commission President Ursula von der Leyen expressed her deepest condolences to the families of the victims, Zelenskyy and all of Ukraine. “We are in mourning with you,” wrote the German on Twitter. EU Council President Charles Michel made a similar statement. Monastyrskyj was a good friend of the European Union. EU Parliament President Roberta Metsola was “heartbroken”. Her thoughts are with the families and relatives of Monastyrskyj and the other victims.

Official Austria also expressed condolences. Interior Minister Gerhard Karner (ÖVP) reacted with deep concern: “My colleague Denys Monastyrskyj has repeatedly informed us in the EU Councils, but also to me personally, about the dramatic situation in Ukraine. My deepest condolences to the affected families and relatives. “

“Our thoughts and deepest solidarity are with the families of the victims in these difficult hours,” Chancellor Karl Nehammer tweeted. Foreign Minister Alexander Schallenberg (both ÖVP) was “deeply saddened by the victims of the tragic helicopter crash near a kindergarten” on Twitter. “Deeply shocked by this sad news,” said Ewa Ernst-Dziedzic, the Greens’ foreign policy spokeswoman.

Affected helicopter was a “super Puma”

According to Ukrainian Air Force spokesman Yuriy Ihnat, it was an Airbus H225 helicopter, also known as “Super Puma”. A commission will investigate the causes. “It won’t just take a day or two, because investigating a flight crash takes a certain amount of time,” Ihnat said. The European Aviation Safety Agency (EASA) imposed a temporary flight ban on the H225 in 2016 due to safety concerns. The predecessor model AS332 was involved in several flight accidents.