For its part, the Sûreté du Québec (SQ) is concerned about the “worrying” increase in collision-related deaths on its territory. In 2022, the police detected no fewer than 266, an increase of almost 10% compared to 2021. The increase is also particularly pronounced for pedestrians.

“We are really redoubling our efforts on prevention, but unfortunately it’s going the other way. We are very concerned,” said Captain Paul Leduc, head of traffic safety at SQ, in an interview with La Presse. In his opinion, SQ’s new road safety strategy, which has been in force since 2021 and aims in particular at “more targeted” interventions in accident-prone sectors, will take a little longer to take effect. “People might think it’s not having the desired impact, but we know for our part that it will affect mentalities over time,” Mr. Leduc continues.

A high point in ten years

We have to go back to 2012 to find such a high number of fatal collisions in the Sûreté du Québec area. The 266 fatal collisions in 2022 – linked to around 291 fatalities – mark an 8.5% increase compared to 2021 when there were 245 collisions. Above all, this means a jump of around 15% compared to the average since 2017, which is 232 accidents. “2019 was a record year with just 217 fatal accidents. Since then, things have really picked up again,” says Mr. Leduc. Across Quebec, including data from the Société de l’assurance automobile du Québec (SAAQ), he estimates that an average of about 350 fatal accidents occur each year. 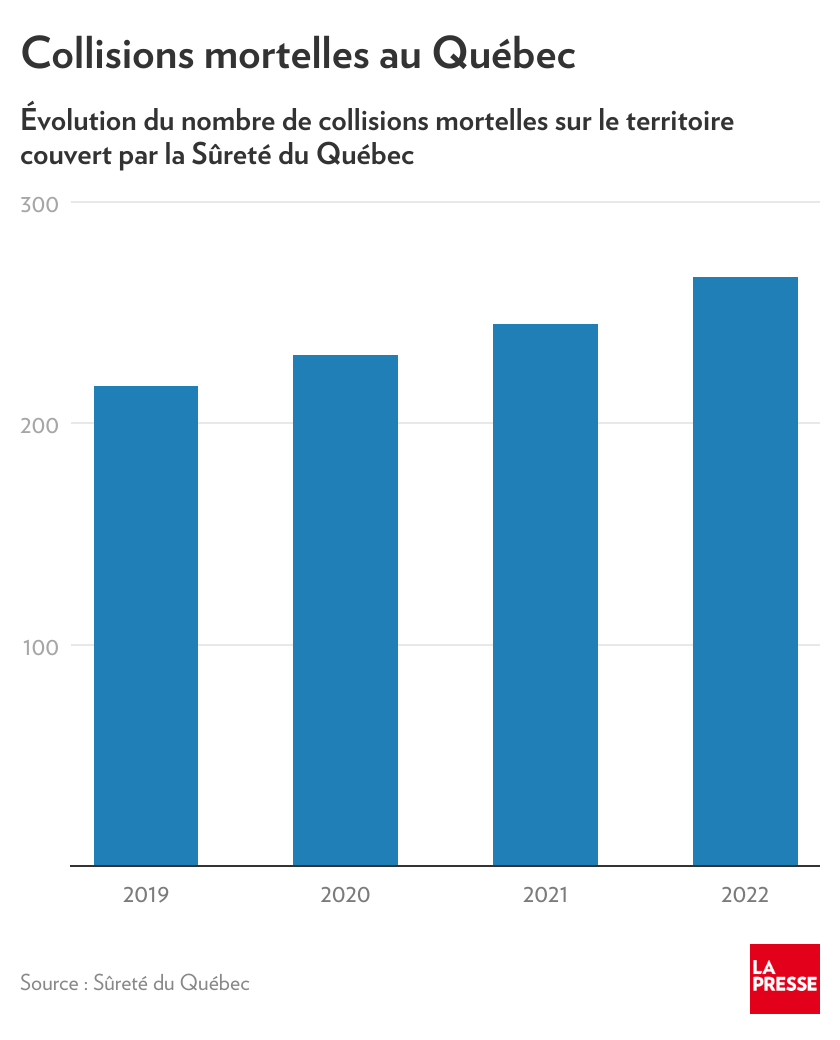 The most notable increases are in pedestrians: in 2022, no fewer than 36 pedestrians died in a collision in SQ territory, a 20% increase in just one year. As of 2017, the average has been less than 26 fatal pedestrian deaths per year; the annual figures show a 40% upward trend in this regard. Seven fatalities were recorded among cyclists in 2022, the same number as in 2021. According to the SAAQ, about 39 pedestrians were killed in Quebec in the first nine months of 2022, a number that is up 15% from a year earlier previous year. Most often, these deaths occur in elderly people not far from their homes. “We need to be more careful and work harder to improve pedestrian safety,” admits Captain Leduc. Since November, he says, SAAQ has headed a committee that analyzes every fatal collision with a pedestrian. “I take part in it. We have engineers with us, people from the Ministry, the police. And we take each of the events, then we analyze everything, and then we recommend changing the signage,” says the official.

A relaxation, the impact of COVID-19?

Paul Leduc, who has been responsible for road safety for ten years, says he feels a “relaxation” in the population’s “respect for the rules”. “One of the indications of this is the fact that in 30% of our accidents people were not wearing seat belts. It’s enormous. It used to be closer to 5%. It has literally exploded in recent years, along with a surge in police pursuits and also speeding,” he notes. Without having a “scientific point of view,” the manager says he wonders every day “if the people behind the wheel want to be more criminal after being locked up for several months during the pandemic.” “Maybe it’s a related symptom, yes.” There was also a lot of travel in Quebec during the travel restrictions,” adds Mr. Leduc.

However, one of the traffic lights on Captain Leduc’s dashboard is green: the number of fatal collisions involving a motorcycle has fallen by almost 20% in 2022 compared to 2021, or 43 compared to 53. In fact, even the average recorded since 2017 is higher than the annual stats, at about 44. And if we compare it to ten years ago, it was double that at over 70. We see that our awareness campaigns have had a significant impact on this group. That’s what we want now for the rest,” concludes Mr. Leduc. He also recalls that with five fatal collision-related deaths per 100,000 people, Quebec remains the second safest province in Canada, behind Ontario (4.6 per 100,000 people) but, most notably, well ahead of the United States of America with 13 deaths per 100,000 population.