The She-Hulk era of the Marvel Cinematic Universe has begun. Tatiana Maslany brings to life one of the most beloved Marvel comic book characters of all time in Jennifer Walters. Audiences are enthralled by more gamma-ray superheroes, fourth-wall-breaking comedy, and the endless number of Easter egg possibilities this show offers.

The reviews are in, and everyone who has seen the series is praising the world-building value of Marvel Studios’ 7th live-action Disney+ series. She-Hulk: Attorney at Law brings the litigation of super-powered beings to the fore. With that comes a variety of unique and appealing ways to expand the MCU.

One episode in and those opportunities won’t go to waste. Here’s a list of all the Easter Eggs in the season premiere of She-Hulk: Attorney at Law. In a promotional clip, Jen Walters and her cousin Bruce Banner discuss what most people would discuss with an Avenger, Captain America. Earth’s Mightiest Heroes are essentially prominent public figures in the MCU, leading to massive attention to their personal lives.

Jen develops a theory that since Steve Rogers took action immediately after his transformation into Captain America, he never had a chance to lose his virginity. Sadly, since Rogers is known for his unhealthy work ethic and busy work schedule, Jen reckons that may not have changed before his time is up.

(Remember that while unconfirmed, the general public is under the impression that Steve Rogers died on the Avengers: Endgame battlefield.) Captain America’s virginity theory is paid off in the post-credits scene of Episode 1 when Jen can’t get over the tragedy of Steve Rogers dying a virgin. Jen’s most upset is that someone with such a Chris Evan-like physique never got a chance to use it.

Specifically, she points out that “America’s Ass” deserves better, a nod to the running gag of Steve Rogers’ butt in Avengers: Endgame.

The lucky lady of liberty As Jen continues to wrestle with the idea, Bruce Banner assures her that Steve was able to lose his virginity to a woman he met on a USO tour in 1943. This is undoubtedly set in the USO montage of Captain America: The First Avenger.

While there’s no definitive proof of this, this could be a reference to a glamor shot of actress Laura Haddock during this montage. Haddock went on to play Peter Quill’s mother, Meredith. One of the more popular fan theories of yesteryear is that Steve Rogers may have been a distant relative of Peter Quill. And while James Gunn debunked that rumor, that would have been fun fuel for that fire.

Welcome to the circus 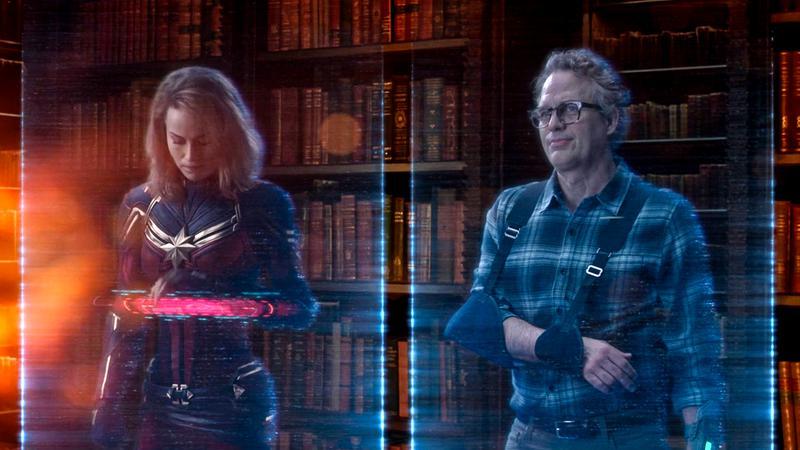 Mark Ruffalo returns as Bruce Banner for the first time since his cameo appearance in the post-credit scene of Shang-Chi and the Legend of the Ten Rings. In this scene, Bruce is seen back in human form, having been “Smart Hulk” for the entirety of Avengers: Endgame.

However, he stayed in the sling and tended his arm after the snap that brought everyone back. The same noose is in She-Hulk Episode 1, along with a device on his wrist that turned out to be a regulator to prevent spontaneous hulking.

The sun is very low 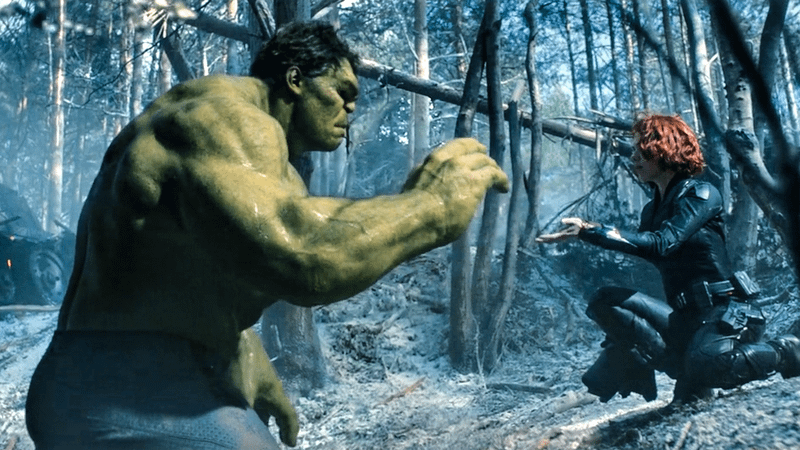 With the introduction of a new Hulk in the MCU, fans are treated to Bruce Banner reflecting on his superhero career. Explaining the ins and outs of being the Hulk to his cousin, Banner reflects on the many ways he was provoked into his monstrous green state and the few ways he was brought back.

The most popular was the famous lullaby from Avengers: Age of Ultron. Natasha calmed Hulk down and brought him back to peace by telling him “The sun is very low.”

This was a tactic Thor tried again in Thor: Ragnarok, unsuccessfully. 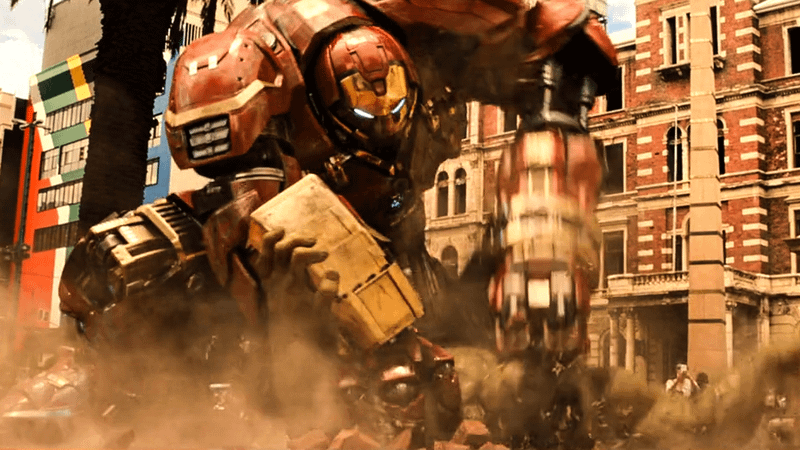 Bruce also mentions other ways he’s snapped out of his Hulk state before, saying: “I usually fall out of a jet or get knocked out by a robot and wake up as a banner.” The mention of a robot might be a cheeky reference to Ultron, but is most likely a tongue-in-cheek nod to when the Hulkbuster knocked him out. 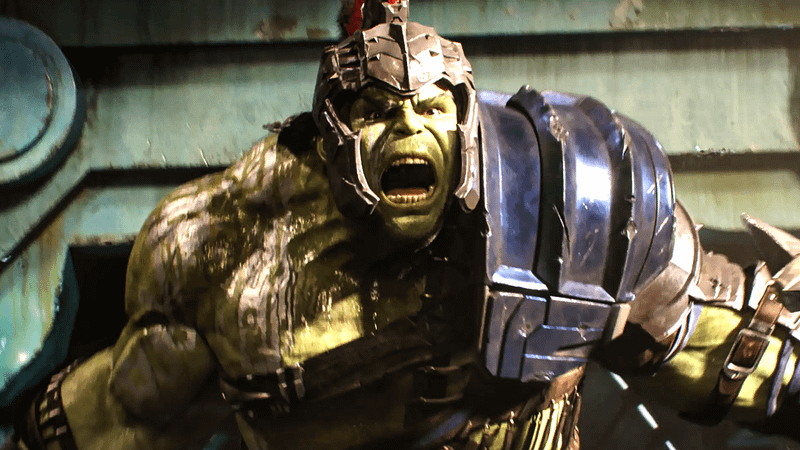 Speaking of Ragnarok, Bruce also explained that he was once trapped as the Hulk for two years when he was a battle champion on Sakaar.

That’s the biggest warning he can give his new cousin as the new Hulk. It was at this point that Bruce realized that Hulk was as much in control as Bruce and began his journey of bringing the brain and the brown together. 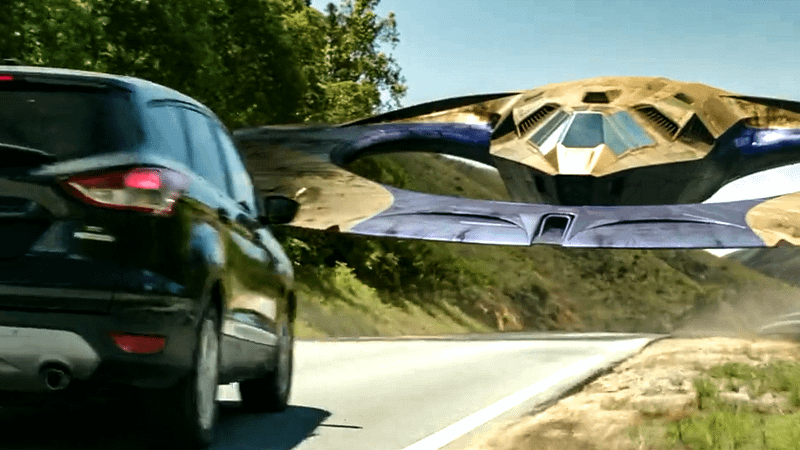 While on Sakaar, Hulk was made into a champion and fan favorite among the people. It seems this wasn’t the end of Banner’s relationship with Sakaar.

No one knows how much contact Hulk has had with the people of Sakaar since Ragnarok, but The Blip’s five-year hiatus makes anything possible. Who knows how far Bruce and the Avengers searched for a solution?

18 months in the gamma lab 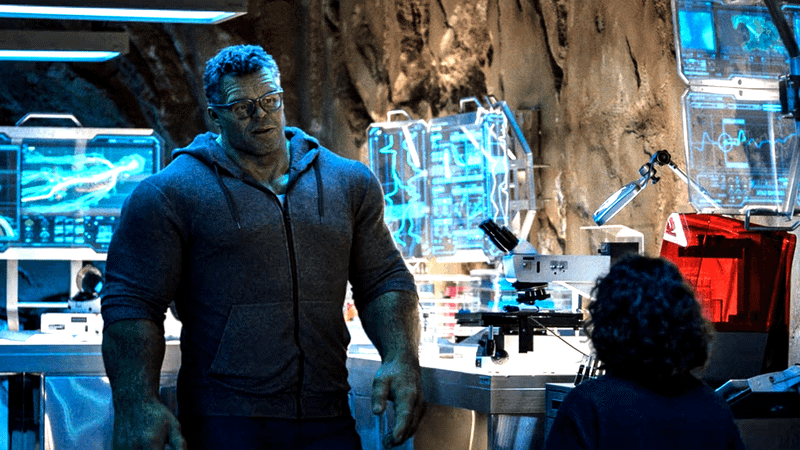 During The Blip Bruce says he “Spent 18 months in the Gamma lab. Bringing brain and muscle power together.” This laboratory is shown in Episode 1 of She-Hulk on a remote private island.

It is revealed that this lab and accompanying tiki bar were built with the help of fellow scientist Tony Stark. That means there’s plenty of Stark Industries technology throughout the island, as evidenced by the blades Jen’s control was tested with, which bear the company’s logo. 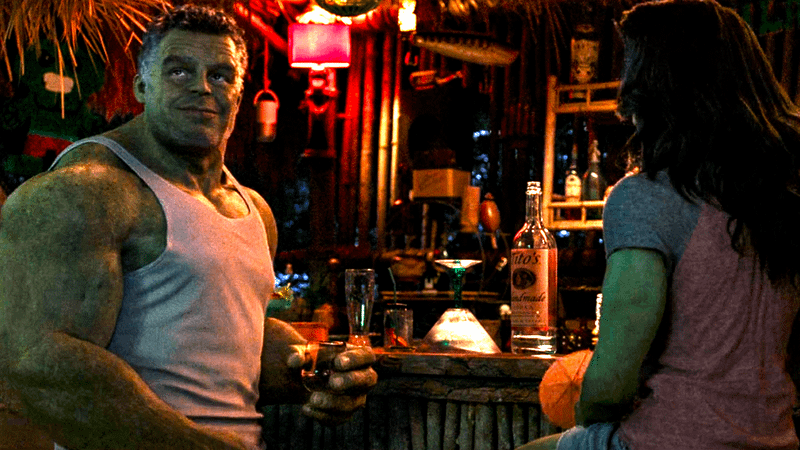 Bruce seems to have trouble talking about Tony, showing that, like all viewers, he misses the legendary Robert Downey Jr. character.

Items from Hulk’s past 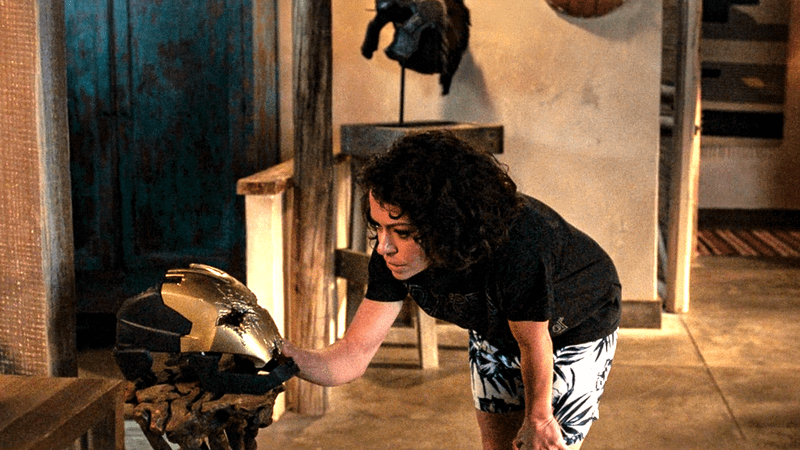 In the Lodge portion of the lab, a location can be seen that Bruce appears to have decorated with trinkets from his past. The most prominent of these is a mask of an Iron Legion robot from Avengers: Age of Ultron.

Before Age of Ultron was blasted into space, Bruce Banner showed himself to be an incredibly active and invaluable member of the Avengers, helping Tony find the best scientific way to complete the mission. It’s likely Bruce helped Tony put together the Iron Legion and all of the other security protocols featured in Avengers 2.

Also seen in Hulk’s cabana is another helmet, but this one belongs to Banner. The gladiator helmet from Thor: Ragnarok can be seen next to Hulk’s wardrobe, a reminder of his fighting days on Sakaar.

Another item from Hulk’s past could be an Easter egg for a specific moment involving Spider-Man and Iron Man. The Led Zeppelin shirt that Jen wears at the end could be a clue when Peter Parker mistakenly believes AC/DC’s Back in Black is a Led Zeppelin song in Spider-Man: Far From Home. 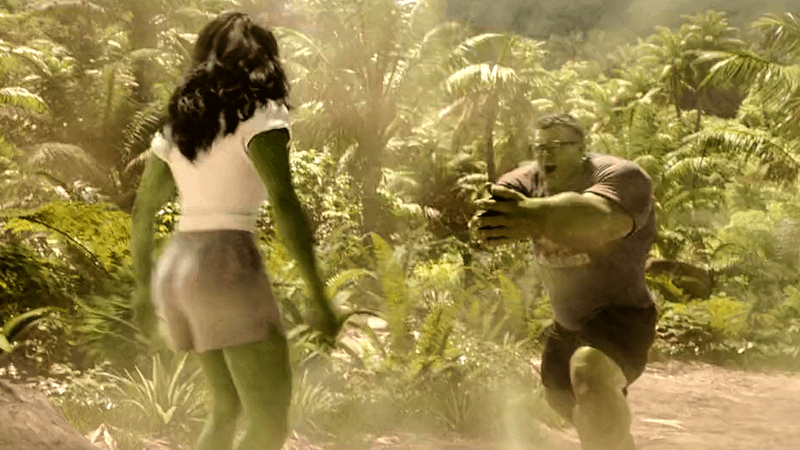 After Jen accepts her fate and allows Bruce to train her in the manner of The Hulk, the audience gets a fantastic Hulk montage. Bruce shows Jen the ropes and it is quickly proven that Jen is way past her age.

Bruce then brings back a move not seen since 2008’s The Incredible Hulk. The Thunderbolt that defeated Abomination was used to slow Jen down during an argument.

Jen retaliates with a variation of this move that converts the power of one big smack into the destructive power of many smaller blasts. 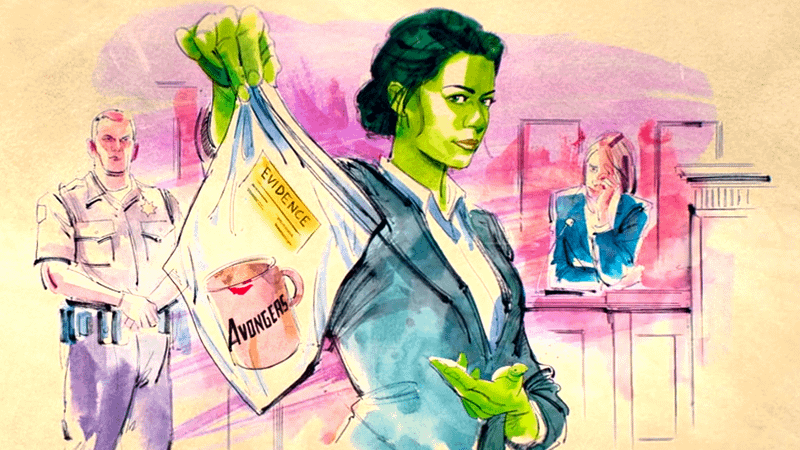 The She Hulk credit sequence, which is full of fun MCU tidbits, comes from that list. A fake mug that says “Avongers” is on display, likely teasing a copyright story with all the Avengers’ popularity.

A document Jen Walters is holding has the SHIELD logo on it, which may indicate that some old cases are being dug up for a precedent. 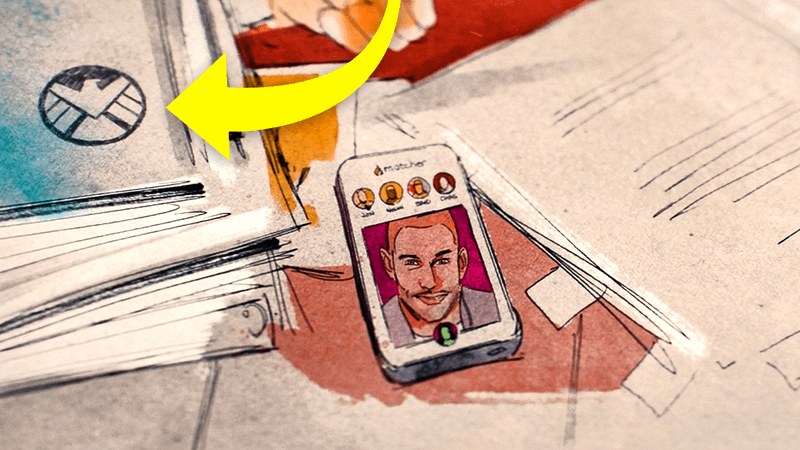 And fans can be seen embracing the superhero celebrity by cosplaying as Thor, Iron Man, Captain America and of course Hulk, further grounding the always awesome MCU. 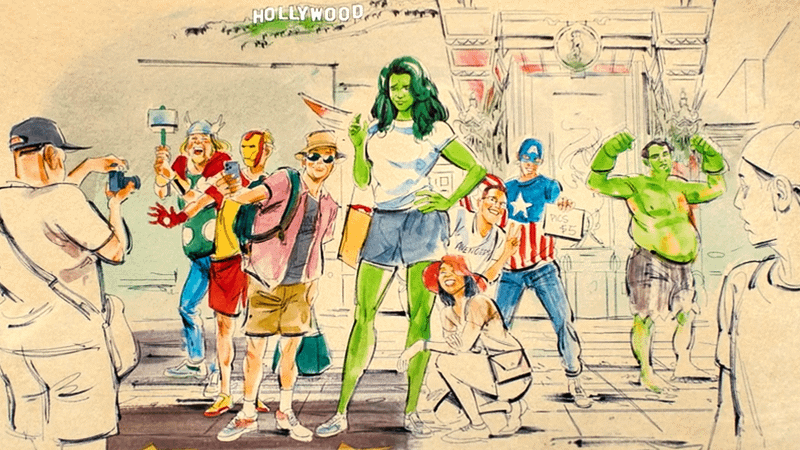 This show is just getting started with Easter eggs and cameo opportunities. Stay tuned to The Direct weekly for a full breakdown of Easter eggs in She-Hulk: Attorney At Law.