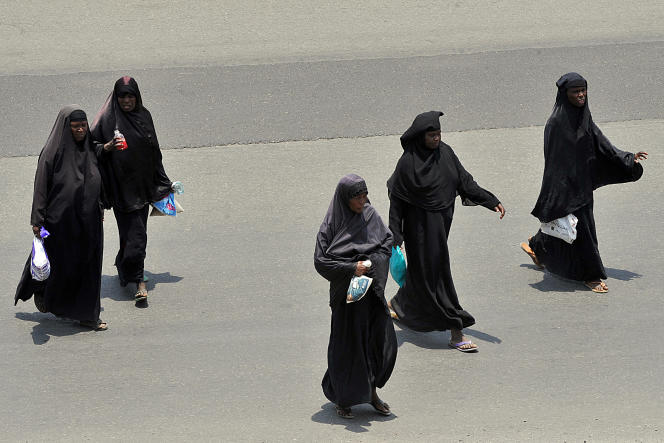 The announcement on December 23 of the suspension of the bilateral agreement on migrant workers between Uganda and Saudi Arabia had raised fears that their contracts would be terminated. But so far, despite warnings from numerous human rights organizations, dozens of young Ugandan women in local uniforms march through Entebbe International Airport every day.

A year earlier, Martha* was one of them. Since her return, the 21-year-old saleswoman has been working in a small telephone shop in the teeming center of Nateete, a district southwest of Kampala. “I’ve heard stories of women making big money in the Middle East. They were able to buy land or a business when they returned, and a friend convinced me to try my luck,” she recalls. After getting a contract as a domestic worker through a recruitment agency, she flew to Saudi Arabia in January 2022 for a salary of 900,000 Ugandan shillings a month (around 225 euros). Well above the income of the majority of Ugandans, 42.2% of whom lived on less than US$2.15 a day in 2019, according to the World Bank.

But when she arrives at her Saudi employers, the long-awaited El Dorado turns into a nightmare. “Very often the father of the family used force to grab me while cleaning, grabbed my chest and I almost had to defend myself because he tried to push me into my room to rape me,” she says. After three months, Martha reports to her agency and asks to be moved to another home or to be repatriated to Uganda. “They just told me I couldn’t go without proof of my allegations! And since they gave my passport to my employer when I arrived, I was stuck in this house without my papers. »

For several months, her family tried everything they could to break the two-year contract and bring the young woman back to Kampala. “The situation came to a head when I gave up my salary and we paid 2.7 million Ugandan shillings [674 euros] to the Saudi family to buy my plane ticket,” said Martha, who returned to her home country in October, six months after her first report.

“There is no safety net”

Her case is painfully commonplace in the offices of Rights for Maids, which was formed in 2020 to help domestic workers in need across the Middle East. “There is no safety net there,” regrets Janepher Nabbumba, director of the organization. So there is a lot of abuse: abuse, sexual assault, overwork, denial of staff access to medical care, non-payment of wages…”

The suspension of the bilateral agreement signed in 2017, which aimed to increase the number of Ugandan workers in Saudi Arabia, will take effect after sixty days if no compromise is found between the two parties. Among the points of negotiation are increasing workers’ wages, improving social security, but most importantly creating a joint technical committee between the two countries.

Also read Senegalese Servants Abroad: “One day I realized I had been sold! »

“It was supposed to be introduced with the original agreement, but it never happened. It would make it possible to ensure that the terms of the partnership are respected and to tackle difficult situations head-on,” affirms Aggrey David Kibenge, permanent secretary of the Department for Equality, Labor and Social Development. At the same time, according to the official, the government decided to strengthen the embassy in Riyadh with attachés to deal with matters related to domestic workers.

A first step for Rights for Maids, but the association advocates measures that allow us to go further. These include moving to one-year renewable contracts – instead of two – to prevent dangerous situations from prolonging, or even respecting the right to treatment, appropriate time off and communication with his family. “Furthermore, it is absolutely necessary that the workers keep their passports,” emphasizes Janepher Nabbumba.

Cases of domestic violence are regularly reported. Last August, a demonstration was organized outside the Saudi Arabian embassy in support of the family of a young employee who died two months earlier after warning of the brutality of her employers. However, departures to the kingdom, the first destination for Ugandan workers in the Middle East, have increased tenfold in five years, going from around 12,000 in 2018 to more than 120,000 in 2022, according to Ugandan authorities.

“It is a very important industry for the country. From the amounts that the workers send to their families, but also from the revenue that the state collects from issuing passports or paying for licenses from recruitment agencies,” assures Aggrey David Kibenge. Authorities estimate that in 2021 the state received more than 42 billion Ugandan shillings ($15 million) by sending workers to the Middle East. “The risks go through agencies with a license [de mauvais traitements] are minimized because we can follow the path of the migrants,” explains the State Secretary of the Ministry of Labour. A speech that makes Martha flinch. “When we got there, we were alone with our problems,” she sighs.

Also read: Article reserved for our subscribers In Morocco, the ordeal of domestic workers from sub-Saharan countries: “Why are you sitting? We must do this! »

A few kilometers away, in the working-class district of Bunamwaya, Anita* also returns from Saudi Arabia after breaking a contract. “I even worked nights and early mornings, I didn’t even have time to sleep when Madame woke me up to give me laundry or other chores,” she says. She offended me. One of his children hit me. The 22-year-old woman changed homes several times before having an accident on the stairs that took her to the hospital and then returned to Uganda. She was not paid a salary during the six months she was there.

However, Anita is already preparing for departure. “What else can I do?” asks the young mother, worried about being able to support her 2-year-old daughter: “There are no jobs here, so I can only try my luck one more time and pray for this time to work. for a better family. »

*Names have been changed.