“We are currently with the investigators. A criminal investigation has been launched against Ovsiannikova for spreading false information about the Russian army,” lawyer Dmitry Zakvatov told AFP.

In addition to the arrest, the journalist’s home received a visit Wednesday from government security officials searching for artifacts to help with the investigation. 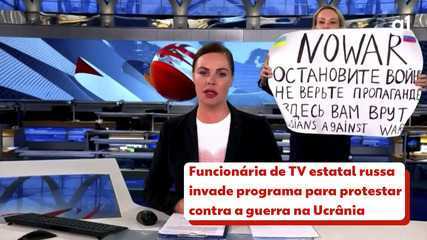 Marina Ovsyannikova, then an employee of the Russian state broadcaster Channel 1, appeared during a live broadcast with a sign that read “Don’t believe the propaganda. They are lying to you here.” While showing the poster, Marina shouted “Stop the war. No to war”.

She previously recorded a separate message saying she was ashamed to be a Channel 1 staffer.

“What is happening in Ukraine is a crime and Russia is the aggressor,” Marina said, adding that her father was Ukrainian. After that, she even drew attention to how the Russian population reacted to the Kremlin’s position.

“We didn’t protest when the Kremlin poisoned Alexei Navalny. We watched this inhuman regime in silence. Now the whole world has turned its back on us, and not even ten generations of our descendants will clean up this war between brothers.”