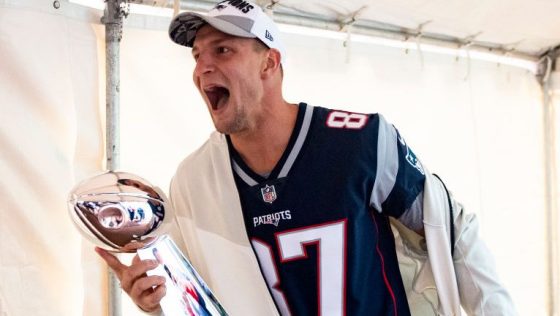 “Do I still think I can play?” Rodgers said. “Of course. Of course. Can I play at a high level? Yes, the highest. I think I can win MVP again in the right situation.”

Many have responded by asking why Rodgers is contemplating winning another MVP award rather than winning another Super Bowl. Retired (for now) tight end Rob Gronkowski chimed in on the issue during a Wednesday appearance on FanDuel TV’s Up & Adams.

“I agree with everything he said except for a large part,” Gronkowski said. “And that’s ‘MVP’ again. It’s just that I’m like, “I could win one more Super Bowl,” and that would have been totally fine. Like bro, why are you thinking of MVP? Don’t you want Super Bowls? Super Bowls are five times bigger than an MVP award in my opinion.

“As we all know you’ve won the MVP a few times now, but how, you know, would anyone know even more how many more Super Bowls you’ve won as MVPs. So I’m just a little confused about the quote he just had. I mean it should be Super Bowls. You should never think about the MVP when Super Bowls happen twice. . . twice . . . better.”

No one will ever accuse Gronkowski of being as smart as Rodgers. But Gronkowski is smart enough to spot the flaw in Rodger’s remark. It should never be about MVP. That does not matter.

Players like Patrick Mahomes attach little importance to winning the regular-season MVP award. Rodgers apparently does. Maybe that’s part of the reason he’s won four of them – and only one Super Bowl.