Warning: The following contains major spoilers for Tuesday New Amsterdam. Proceed at your own risk!

One documentary filmmaker was particularly missing from the New Amsterdam series finale on Tuesday: Dr. Helen Sharpe, played by Freema Agyeman, who left the NBC drama at the end of Season 4.

At the end of the series, Max announced that he was moving to Geneva, Switzerland to work for the World Health Organization. When he committed, his daughter Luna – who as an adult became Medical Director of New Amsterdam! – Centered in his life with his new job, Max’s romance with Dr. Elizabeth Wilder abruptly, although the two obviously still harbored strong feelings for each other. But what about his ex-fiancée mentioned in the penultimate episode?

“[Freema] was absolutely ready to return for the season finale,” showrunner/executive producer David Schulner told TVLine. “Our only regret is that she and Anupam Kher – his character [Dr. Kapoor] died on the show, of course — but we would have loved to have honored those characters and actors in the finale as well, but we just couldn’t make it work.”

Executive producer/director Peter Horton explains that planning issues, rather than plot, prevented Helen from being part of the series’ swan song. “We really tried Freema too, just to see if we could get her, but it just didn’t work out,” says Horton.

Despite this unfortunate circumstance, Schulner believes that “everything worked out the way it was supposed to because the story we had for Freema in the finale wasn’t as good as we had it in the end,” he shares. “So on the plus side we would have had Freema in the final but the downside is it wasn’t that satisfying.” 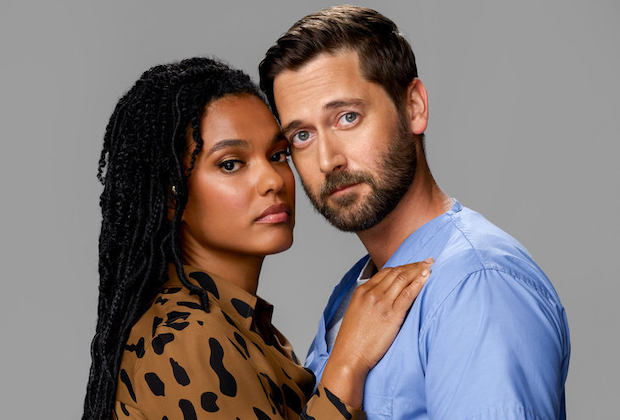 When asked if they would have to adjust their vision for the series finale after Agyeman’s exit at the end of Season 4, Horton says, “I think to a certain extent we had to paddle a bit when we realized she wasn’t coming back. But like David said, we’re really happy with where it ended up. It’s just different than it would have been if she hadn’t gone.”

“We never wanted her to leave. We love her and she was a big, big part of our show,” adds Horton. “She just made a choice that we respected. But in the face of our brothers, especially at that time, we would have said, ‘No, please stay.’ She’s a great actress and a lovely person.”

Although Helen hasn’t been a part of the New Amsterdam Hospital lately, her presence was felt throughout the season, especially to Max.

“When [Max’s wife] Georgia died in Season 1, she was present throughout Season 2,” says Schulner. “So we knew that Helen left Max at the altar at the end of Season 4, Helen needed to be present in Season 5 even as Max tried to move on. It doesn’t go any further. Helen needs to be part of the show. So we did what we could given the limited footage we had.”

For more on the big developments of the series finale, check out our EP Q&A here.