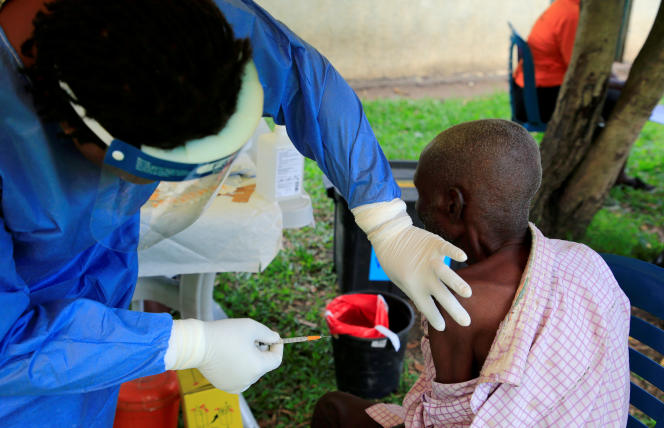 A man is vaccinated against the Ebola virus in Kirembo, Uganda, June 16, 2019. JAMES AKENA/Portal

It took less than four months to contain the Ebola virus disease (EVD) outbreak that broke out in Uganda on September 20, 2022. Officially declared over by the World Health Organization (WHO) on January 11 after forty-two days without a new case, this epidemic outbreak joins the list of forty epidemics that have struck the African continent since 1976. With 142 confirmed cases (and around 20 probable cases) and 55 deaths reported, the 39-47% case fatality rate is among the lowest in recent years – not counting those with no or very little symptoms, who, according to studies, make up 10-12% of those with people infected with the virus.

A sure victory for Ugandan health authorities, which nonetheless leaves an air of unfinished research as the end of the epidemic marks the end of a large-scale clinical trial of three vaccines targeting the strain of EVD known as “Sudan”. The WHO had indeed pulled off a feat by facilitating the development, submission and validation of a testing protocol, and the shipping of more than 5,000 doses of three different types of vaccines to Uganda… all in just 691 days. An unprecedented mobilization of global health authorities and local actors in Uganda. “Because the epidemic was brought under control quickly, we will have information on vaccine tolerability and antibody lifespan, which are important elements in terms of vaccine strategy, but the results will not allow us to say if the vaccines are against the disease effective,” explains Eric Delaporte, Professor of Infectious Diseases at the University of Montpellier.

So, despite the speed of these steps, it is not the vaccines that have been able to stop the spread of the virus, but above all the efforts to detect cases of contact – especially in unprotected burial rituals, in the hospital or among traditional practitioners – the implementation of effective barrier gestures and the general improvement of the Care. Despite everything, vaccines remain a strategic tool for future epidemics, thanks in particular to their preventive dimension.

As of 2019, two EVD vaccines have already been prequalified by the WHO, meaning they meet the organization’s quality, safety and efficacy standards and can be used in risk countries. But they are targeting the so-called “Zaire” strain of the disease, which has notably caused the largest EVD epidemic ever observed, from 2013 to 2016 in West Africa but also from 2018 to 2020 in the Democratic Republic of the Congo ( ground floor ). These vaccines are considered ineffective against the Sudan strain, which has hitherto mainly affected Sudan and Uganda in minor epidemics. They don’t aim either the three other tribes listed: Bundibugyo, Reston and Taï Forest.

You have 63.53% of this article left to read. The following is for subscribers only.