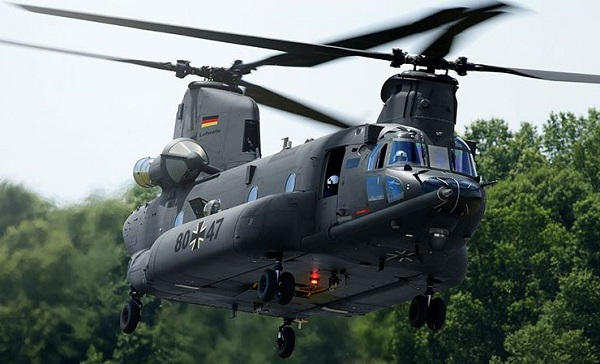 The Heavy Transport Helicopter program. [STH]launched in 2017 by the German Ministry of Defense to replace the sixty heavy transport helicopters [HTL] The Bundeswehr’s CH-53G has no shortage of twists and turns. If everything had gone according to plan, the winner of the 2020 competition should have been determined. And then there were two competitors – Americans – in the running, including Boeing for the CH-47F Chinook and Sikorsky [filiale de Lockheed-Martin] for the CH-53K King Stallion.

However, the only decision made that year was to drop the proceedings, as Berlin felt it would have had “little chance of happening within the budget allotted [de 5,6 milliards d’euros, ndlr] in compliance with the stated requirements. The specifications requested by the Bundeswehr clearly implied an excessively costly modification of the equipment then in service.

As the need to replace the CH-53G has obviously not disappeared, the STH tender was restarted in 2021, but with reduced requirements. And the two American industrialists faced each other again. In order to enforce the decision, some made agreements with the German aviation industry.

The choice fell on Berlin in June 2022. And since it was unsurprisingly the favorite, the CH-47F Chinook prevailed. “We carefully weighed the pros, cons and risks and then unanimously approved this model. The Chinook is modern and proven. With him we are strengthening our ability to cooperate in Europe. We will also get a larger fleet and gain flexibility,” argued then-Defense Minister Christine Lambrecht.

And a priori, the question of price was also decisive. “The lower unit price of the CH-47F also allows larger numbers to be purchased, which means greater operational flexibility for the armed forces,” emphasized the Federal Ministry of Defense. And to insist on the “reduced financial and technical risks”, as well as the prospect of cooperation with other NATO countries that have made a similar choice.

Thanks to the special fund of 100 billion euros, the Bundeswehr could then hope to be able to order 60 CH-47F Chinooks for around 6 billion euros. But obviously things weren’t going to go as planned just yet…

According to Business Insider Germany, which interviewed multiple government and industry sources, Boris Pistorius, who has just succeeded Ms. Lambrecht, will find this a welcome gift that would have gone well… Indeed, the bill for the 60hp -47F Chinook went up from 6 billion to 12 billion. Questionable? Berlin had requested “expensive” devices, of which “some components were not yet mature”. And inflation would explain the rest…

However, a spokesman for the Federal Ministry of Defense did not confirm this information. “We have not yet received the offer and acceptance letter from the United States, so we cannot comment on the price,” he told Portal.

The Boeing side emphasizes that the purchase of the Chinooks must be the subject of an agreement between the governments … Means: the question of the price will be addressed in negotiations between Berlin and Washington. And this should be completed before the end of this year.