A march billed as the “Takeover of Lima” escalated to fighting between protesters and riot police amid rock-throwing and vortices of tear gas on Thursday night in the Peruvian capital.

Thousands of protesters from across the country flocked to Lima earlier in the week to take part in a massive march demanding the resignation of President Dina Boluarte, after nearly six weeks of unrest that killed more than 50 people, including a police officer and eight people, they died as a result of strikes and blockades.

In a late-night televised address, Boluarte said police had the protests under control and that those responsible for violence and vandalism would not go “with impunity,” adding “this is not a peaceful march.” She said the “government is firm and her cabinet more united than ever”.

Boluarte claimed the protests had “no social agenda” but rather sought “to break the rule of law, create chaos and disorder and seize power”. She added that attacks on three regional airports had been planned in advance and would be punished with “the fullest force of the law”.

“To the Peruvian people, to those who want to work in peace and to those who provoke protest actions, I say: I never tire of calling them to a good dialogue, to tell them that we work for the country,” she said .

One person died and about ten were injured in clashes with police in the southern city of Arequipa on Thursday, according to the Peruvian Ombudsman’s Office, when protesters reportedly tried to enter the airport. Several airports were closed and large parts of the country were paralyzed by more than 120 roadblocks. 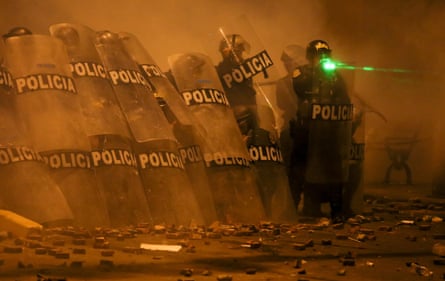 Outrage at the rising death toll has fueled mounting protests, which began in early December in support of ousted former President Pedro Castillo but have overwhelmingly shifted to demanding Boluarte’s resignation, the closure of Congress and new elections. Boluarte was Castillo’s vice president, replacing him after he tried to shut down Congress and rule by decree on December 7.

“We want justice, we don’t want our dead to be forgotten,” Zulema Chacón told the Guardian. “We want this usurper out, she doesn’t represent us.”

“They are the thieves and they lie and lie to us,” said Delia Zevallos, 52, a shopkeeper, referring to lawmakers in Congress, Peru’s most despised political body. “People have woken up, we’re not kids anymore, we can read and write… and nobody can tell us what to do.”

Boluarte, who said last week that she would not resign, met with a representative from the Office of the UN High Commissioner for Human Rights earlier Thursday. Last week, the UN agency said it was “extremely concerned about the increasing violence” in Peru. 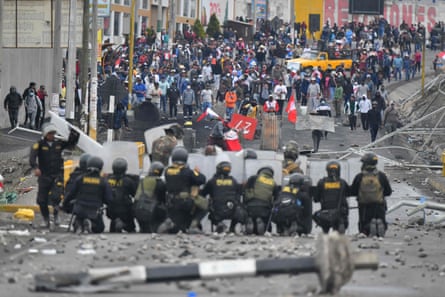 Both the US and British ambassadors to Peru welcomed the meeting and issued statements on Thursday calling for calm and urging the government to seek dialogue.

In a statement in Spanish TwitterUS Ambassador Lisa Kenna said it was “vital that law enforcement respect human rights and protect citizens.”

In a similar way expressionHer British counterpart Gavin Cook called for “prompt and impartial investigations, accountability measures and justice for the victims of reports of human rights abuses”.