We have just returned from a series of meetings in Berlin. There we heard quite a lot of sharp criticism of Chancellor Olaf Scholz’s reticence towards Ukraine and quite a lot of skepticism about his proclaimed turning point. Since both of us have often voiced criticism and skepticism about our European allies’ commitment to a robust defense policy of resistance against dictators, we suspect that our interlocutors expected us to echo those criticisms.

And we share some of the criticism and skepticism.

But as long-time critics of a Europe that hopes for peace more than it cares about its conditions, we think it’s important to say: We returned from Berlin emboldened and emboldened. We see a glass that is more than half full. And we believe that Germany has a key role to play, not only in supporting other allies, but in shaping a brighter future.

We would have wished for more military aid for Ukraine from Germany. We are amazed at the news that even if Berlin decides this week to provide Kyiv with Leopard tanks, it will probably take a year before they are combat-ready.

But it’s also true that the United States is also lagging behind in that first year. Brave Ukrainians should have had our Patriot missile defenses, Abrams tanks and Bradley combat vehicles months ago. 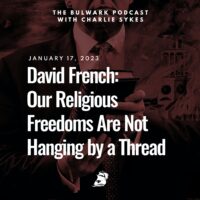 And how unevenly, Germany is making progress. In the early days of the war, we remember the widespread mantra in Berlin: “We never bring arms into active conflict zones”. We recall that Germany felt it was important to promise Ukraine 5,000 helmets, with many officials insisting that only dialogue with the aggressor could bring peace.

A lot has changed since then.

Another mantra of German foreign policy has also fallen by the wayside: change through trade, the idea that a web of trade coupled with serious dialogue can soften the heart of a cruel dictator. Note how quickly and decisively Germany eliminated its dependence on Russian energy.

The change goes beyond the number and quality of weapons. Germans who believe in the UN Charter with its prohibition of aggression and its commitment to a nation’s right to self-defense are now discovering the value of deterrence and hard power.

All of this comes close to an epiphany for a country that had so long defined itself as a civil power in a world that has rumored to jettisoned geopolitics for a new era of geoeconomics and geocooperation.

What struck us in Berlin: Germany’s change in attitude on foreign and defense policy issues is sudden, dramatic – and important.

The political discussion in Germany today would have been unthinkable a year ago.

On February 27, 2022, just three days after the start of the war and two months after his term as Federal Chancellor, Olaf Scholz saw a turning point that was to affect not only Germany but all of Europe:

We are experiencing a turning point. And that means: the world after is no longer the same as the world before. The core question is whether power can break the law. . . whether we have the strength to put limits on warmongers like Putin. That requires your own strength.

[We are living through a watershed era. And that means that the world afterwards will no longer be the same as the world before. The issue at the heart of this is whether power is allowed to prevail over the law . . . whether we have it in us to keep warmongers like Putin in check. That requires strength of our own.]

Striking, these words of a social democratic Chancellor, from the party of Gerhard Schröder. We realize that a speech is just a speech and that a single year is just a snapshot. We are also aware that Chancellor Scholz is viewed by many as too cautious and still bound by the doctrines of the past. We also wish it leaned forward a bit more.

But these transformations take time. No one expected that when Harry Truman succeeded Franklin Roosevelt, he would be a world historical figure setting a foreign policy for a new era. And certainly Truman made some mistakes and hesitated many times. But he – and we – made it.

So too today: we can transform a healthy response, an encouraging response to Putin’s aggression, into a deeper understanding of our responsibilities and opportunities to shape the future. The turning point may have been provoked by Putin. But it has to be thought through and executed by us.

If the West decisively defeats Russian imperialism in 2023, it would not only be a turning point for European security and for the transatlantic alliance – it would set the stage for a true turning point for the post-Cold War world. After several decades of retreat from the forces of liberal democracy, liberal democracy would have focused not just on fighting back, but on building a better future for the world.

Many figures would share the credit for helping steer us through such a turning point – most notably President Volodymyr Zelenskyy and the brave people of Ukraine, but also many leaders in Central and Eastern Europe and President Joe Biden. And Chancellor Scholz and his government too. The German Greens deserve great respect for opening up the possibility of real transformation.

The Chancellor has probably expressed the hope, the promise of a turning point. Now Germany – along with other leading democracies – should act boldly and consistently, deeply and comprehensively to fulfill that promise.