With the documentary “Hitchhiker with Hatchet,” Netflix tells the story of a man who became the darling of the internet before he was charged with murder. The perpetrator is outraged by the way he is portrayed by the platform. 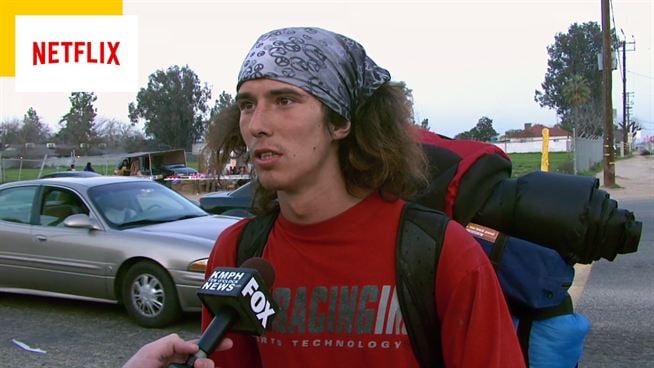 Netflix continues its passion for crime stories with a new documentary, Hitchhiker Kai, releasing January 10. This film tells the story of Kai Lawrence, a young man who became an internet star after being interviewed by a local news station.

Armed with a Peace And Love bandana and a holdall, this homeless man passionately tells how he saved a woman’s life by attacking her attacker with a hatchet. The video went viral and the vagabond became the star of the internet, parodied thousands of times by internet users.

A few months later, Kai Lawrence — or better Caleb Lawrence McGillvary, as his real name is — was arrested for the 2013 murder of a 73-year-old attorney. The Netflix film looks back at the young man’s multifaceted personality, the phenomenon that emerged from his interview and the rest of the case.

Currently in prison – where he’s serving a 57-year sentence – the perpetrator contacted American outlet The Tab to accuse the platform of exploiting his story. In an exchange of emails, Kai Lawrence protested, “Netflix made a film about my life before I was arrested, but they are refusing to pay me.”

He continues, “If someone makes a film about OJ Simpson’s career, you can be sure it’s going to make money. Guys who kill and rape women pay off, but I saved a woman from death and killed a rapist, so Netflix takes advantage of me without a shred of mercy. What is this mess?”

Kai Lawrence must first serve 43 years before being eligible for parole.

Kai the Hatchet Hitchhiker is available on Netflix.