Reed Hastings is stepping down as chief executive of Netflix, the company he co-founded 25 years ago, in a reorganization at the helm of one of Hollywood’s most powerful studios.

Hastings, who launched Netflix as a DVD-by-mail service in 1997, wrote in a blog post that he’s increasingly delegating management in recent years. Now is “the right time to complete my succession,” he added.

“Our board has discussed succession planning for many years (even founders need to evolve!),” wrote Hastings, 62. “I’m so proud of our first 25 years and so excited for our next quarter century.”

Netflix shares are up more than 6 percent in after-hours trading.

The change comes as Netflix lost more than a third of its market value over the past year after it was announced that its decade-long growth spurt had ended. Sarandos and Peters are tasked with picking up steam again and guiding Netflix through a more austere era for the entertainment industry.

The change at the helm of Netflix came as the company reported that it added 7.7 million subscribers in the fourth quarter, far exceeding expectations thanks to popular programs like the Addams Family spin-off Wednesday and the Harry & Meghan Documentary Series. Netflix had forecast that it would add 4.5 million new subscribers in the quarter.

Sophie Lund-Yates, analyst at Hargreaves Lansdown, said, “While Wall Street suffers under the weight of recession fears and Federal Reserve jitters, Netflix’s huge hit to subscriber numbers has injected some much-needed optimism into the mix.”

Netflix stunned investors last April when it announced it had lost subscribers, prompting a punitive re-rating of the entire US media industry in stock markets. Post the “Netflix Correction,” Wall Street has become more wary of the streaming video market, increasingly focused on profitability and forcing major entertainment giants to become more cost-conscious.

Netflix ended 2022 with 231 million paid subscribers, for an annual gain of 8 million, its worst annual growth in a decade. In a letter to investors, the company said, “2022 was a tough year with a bumpy start but a better ending.”

The company spent $4 billion on content in the quarter, compared to $5.7 billion at the same time last year.

Netflix shares have recovered somewhat from last year’s lows and are up 9 percent this year. But its $141 billion market valuation is still about half of where it peaked during the coronavirus pandemic.

As subscriber growth slows, Netflix has taken two key steps to shore up its business: launching a cheaper version of its streaming service with ads, and trying to limit password sharing, a practice it’s largely abandoned as it grows had ignored. 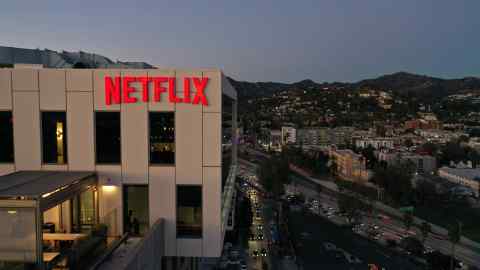 Netflix quickly created an advertising tier in partnership with Microsoft, launching the platform in November for $7 a month. The company said Thursday it was “pleased with the initial results.”

Faced with both of these potential new revenue streams, Netflix has stopped providing investors with guidance on the number of new subscribers — a symbolic change for a company whose stock price has skyrocketed on subscriber growth for years.

The promotion of Peters, who played a big role in launching Netflix’s ad tier, “is an indication of how much the ad business means to Netflix,” said Insider Intelligence analyst Paul Verna.

“Just like the earlier rising of Sarandos . . . was a sign of Netflix’s maturation from a tech company to a film and television studio, the current shift is putting advertising, alongside content, at the center of the picture.”