did you say pineapple For real? Again? No no no…”. The pizza maker, voted the best pizza maker in Europe 2021 and 2022, can’t believe what the author of the crowned best pizza in Spain just said in the latest issue of Madrid Fusión. “Of course, and look if I’m hungover , I ask for Domino’s and it’s wonderful”, emphasizes Lolo Zozza (Rome, 33 years old), manager of Can Pizza with 10 stores in the province of Barcelona , ​​Madrid and Ibiza. Author of Jerry Tomato (the triumphant pizza in Madrid Fusión) has invited the best pizza maker in Europe, Peppe Cutraro (Naples, 26 years old) to present his creations during two sessions in two Can Pizza locations in Madrid and Barcelona. On the menu, each offers two pizzas. Those of Cutraro, personal variations on the Neapolitan canon with ingredients such as Taggiasca olives or fig jam; Zozzas, riskier versions of the Roman version, with its already distinctive style, the Guanciale or the using all the tomato splendor found in his award-winning work. “Did you bring me here for this? It’s a provocation,” says Peppe Cutraro, who runs a restaurant in Paris with his first name, to which pizza fans from all over the world flock, annoys Peppe Cutraro. Both have been discussing dough, tomato and mozzarella at Can Pizza on Calle de Serrano in Madrid for almost an hour and agree on practically everything. But the pineapple has arrived. “I don’t understand why people react like this when I say I don’t mind pineapples on pizza. I even like it. When he saw her in Barcelona yesterday, he almost got up and went back to Paris,” says the Roman. 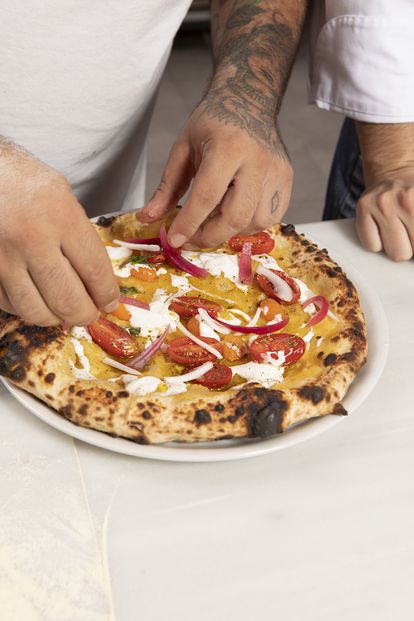 Peppe Cutraro and Lolo Zozza, with their hands in the dough. Matias uris

The two started working in the kitchen at the age of 14. One landed on the pizza. The other started with her. “It’s common in Naples to start making pizza at a young age, it’s a way to earn money for the family,” says Cutraro. For his part, Zozza worked in kitchens in his hometown of Rome and London, fell in love with pizza with master Francesco Etzi and as soon as he landed in Barcelona he met the Colombo brothers (Xemei) and they founded Can Pizza. “We’ve been around long enough to see how this trade has evolved,” he intervenes. “The pizza man used to be the man standing in a corner that only the kids noticed. Now there is more recognition, and the fact that there are international competitions, rankings, etc. makes the job more demanding and the average quality goes up. Now you can eat good pizza anywhere. It is very noticeable in Barcelona where you can eat any type of quality pizza. Although Barcelona has always been a different Italian city for me.” Zozza also says that the new generations’ logical and healthy reluctance to work 70-hour-a-week hellish shifts has helped streamline trade. “You understand the red lines and apply them at the end,” he says. “Now you can be a pizza maker and have friends,” Cutraro jokes.

There is Roman, Neapolitan, Argentinian, New York, Chicago or Detroit pizza. Even Turkish pizza. And one is from a pizza delivery guy, just like it’s from a soccer team. “I remember when I was little in Naples there was no Roman pizza, no one even thought about eating anything but Neapolitan pizza,” says Cutraro of his city, headquarters of a group called Associazione Verace Pizza Napoletana, the product ensures the purity of the pizza and awards seals of authenticity to locals and chefs from all over the world. “And of course there was no Neapolitan pizza in Rome,” Lolo interjects.

Aside from the use of ingredients (“never more than four or five, in Spain they like to put too many things in,” Zozza points out), the key to every pizzaiolo’s style is the dough. At Can Pizza, for example, they use five flours and ferment for 72 hours. “Pizza is magical. Everyone likes it and it’s in almost all cultures. It’s even coming to China. Some add more cheese, others make it thinner, others with pineapple…” says the Roman. “Did you say pineapple? Seriously?” comes from the Neapolitan side of the table.