Rupert Murdoch has scrapped a proposal to merge Fox and News Corp after his attempt to bring the two halves of his media empire back together was rejected by shareholders.

Murdoch’s companies announced on Tuesday that the “special committees” set up to investigate the terms of the alleged merger would be dissolved effective immediately because the proposal did not serve the interests of Fox and News Corp shareholders “at this time”.

Fox and News Corp said Murdoch and his son Lachlan determined the combination was “less than optimal” for shareholders, an acknowledgment of reservations from big investors who feared the merger would not realize the full value of the assets.

In addition to calling off the proposed merger, News Corp is in advanced talks to sell its 80 percent stake in Move to rival CoStar, according to three people briefed on the negotiations.

The stake in Move, which operates realtor.com among other real estate websites in the US, is valued at “low billions” of dollars, the people added.

A sale of Move’s stake would be significant enough to change the calculus for the committees evaluating the Fox-News Corp merger, one of the people said.

Murdoch, 91, proposed in October to reunite the television group behind cable channel Fox News with the owner of newspapers like the Wall Street Journal, in a deal that would have rejoined what was left of his empire after nearly a decade.

Murdoch believes there are opportunities for collaboration between Fox and News Corp’s business news brands, including Fox Business, Fox News, Barron’s, MarketWatch and The Wall Street Journal, people familiar with the plans said.

However, he faced opposition from some large News Corp shareholders, who thought the combined company would be worth less than the individual groups in the stock market. 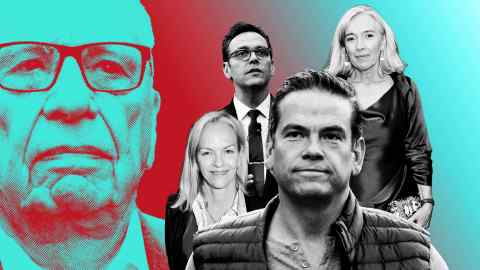 CoStar is the Nasdaq-listed owner of brands such as Apartments.com, LoopNet and Homes.com. The group is one of the largest digital real estate companies in America with a market value of approximately $32 billion.

Digital real estate has become a much larger part of News Corp’s overall business, growing from 5 percent of total revenue in 2014 to 17 percent in 2022. Revenue in the group’s digital real estate segment grew 25 percent to more than $1.7 billion -dollars in fiscal 2022. Move reported revenue growth of 11 percent last year to $712 million.

In 2014, News Corp acquired Move for $950 million, a transaction that CEO Robert Thomson described at the time as “exponential growth” of the company’s print publishing business.