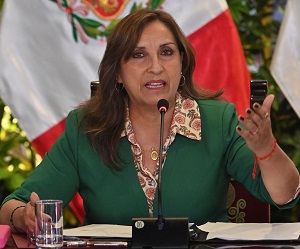 Beyond the social protests, President Dina Boluarte is facing a serious unpopularity crisis. 71 percent of Peruvians disapprove of his management, the Institute for Peruvian Studies (IEP) reported today in its latest survey.

The IEP poll found that 88 percent of respondents oppose the work of Congress, up eight percentage points from the previous month, while 58 percent believe there has been repression by the security forces.

Likewise, 60 percent considered the protests that have been taking place since last December to be justified. This indicator is higher among young people, at 72 percent. Half of those questioned stated that they felt identified with the demonstrations.

Based on polls conducted between January 7 and 12, the study found that 44 percent of respondents believed the protests were carried out by spontaneous actors, while 27 percent linked them to violent and terrorist groups.

Another poll conducted by Ipsos Peru confirmed Boluarte’s rejection, noting that the management of Prime Minister Alberto Otárola and Congress President José William were opposed by 61 and 62 percent of respondents, respectively. or.

Likewise, 52 percent of the sample estimated that it would be necessary to hold elections next December. In addition, 57 percent believed that the President and Congress should be elected every four years.

The South American nation has been experiencing a severe political crisis since Congress ousted then-President Pedro Castillo last December, prompting massive protests that were violently put down by police.