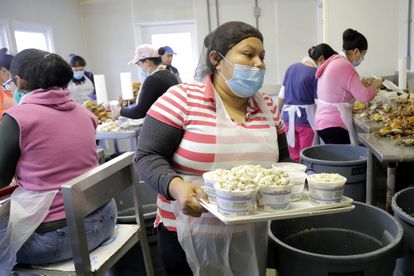 Evelia García, originally from Hidalgo, Mexico, works at a crabmeat packhouse in Fishing Creek, Maryland, in May 2020. Julio Cortez (AP)

After months of negotiations, Mexico and the United States have reached an agreement to expand protections for more than 365,000 Mexican workers working across the border. Additionally, both countries have signed MoUs to expand hiring foreign workers in the US, secure their salaries and working conditions, and even consider finding mechanisms to reunite Mexican minors whose families live on US soil. Roberto Velasco, head of the State Department’s North American unit (SRE), said that in 2022 about 365,000 Mexicans came to the neighboring country on visas to work temporarily, and estimates that number will rise to 400,000 this year.

The labor mobility MOU is designed to protect the labor rights of workers from Mexico, but extends their protections to immigrants from Guatemala, Honduras and El Salvador. The document ensures that agricultural and non-agricultural jobs are facilitated in Mexico and the United States, as well as taking care of workers with work visas whose labor rights have been violated. According to SRE, Hispanics make up 18% of the US workforce. After signing these agreements, Mexico and the United States committed to increasing the ethical attitudes of Mexican workers on H2 visas (agricultural and non-agricultural), as well as strengthening protections of workers’ wages – including back wages – and working conditions. migrants. The agreement aims to go further by offering health and life insurance options for foreign workers on US soil.

Mexico’s foreign ministry said the binational deal has a solution component to crack down on those companies that may retaliate against migrants who denounce them. The document calls for holding quarterly meetings to prevent, monitor and report violations of labor rights such as fraud, abuse, discrimination, among other things. “It is not only based on complaints, which are anonymous anyway, but also on the two-way exchange of information between governments. If the United States realizes that there are some companies violating rights, they can tell us and vice versa,” SRE sources said.

On the other hand, the Memorandum of Understanding on Cooperation to Protect Minors of Immigrant Relatives aims to facilitate safe and regular pathways for family reunification of children living apart from their families. On the Mexican side, this initiative will work hand-in-hand with the National System for Comprehensive Family Development (DIF) to identify cases of unaccompanied infants and youth in a mobility situation who are in DIF custody. “The idea of ​​the MoU (memorandum) is that if the minor’s best interests are to be reunited with their family in the United States, that can be done safely and obviously, with the minor’s best interests taking precedence.” Foreign affairs insured.

These agreements came in the wake of US President Joe Biden and Canadian President Justin Trudeau’s recent visit to Mexico for the North American Leaders Summit. The migration crisis and the regional economy were two of the pillars of the trilateral meeting. In addition to these agreements on labor mobility and the protection of migrant minors, the diplomatic meeting popularly known as the Three Amigos Summit also served as a framework for the signing of an agreement in favor of indigenous peoples, protection of civil rights and promotion of racial justice, among other things.

Despite binational efforts, the immigration crisis resulting from thousands of people trying to enter the United States illegally every day is not stopping. Last year ended with the highest number of illegal immigrants since World War II: two million arrests by US border patrols. According to these agents, US authorities arrest between 7,000 and 8,000 irregular immigrants every day along the border.