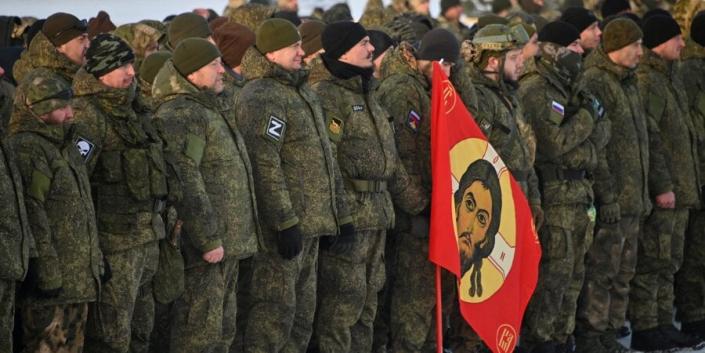 — The Main Intelligence Directorate (HUR) has repeatedly reported that another mobilization is being carried out in the Russian Federation. Is there more information on when this will be launched? Perhaps this covert mobilization has already begun, and how many people are likely to be involved?

(Moreover) the strengthening of register formation, especially of minors under the age of 17, raising the draft age and much more, which allows us to say today that preparations for a new stage of mobilization in Russia have already been completed. … The military and political leadership of the aggressor state speaks publicly of forming an army of one and a half million, (but) what they actually have in mind is the formation of an army of two million. A new wave of widespread mobilization will certainly be organized for this.

Basically, this means not only staffing and mobilization, but also a total curtailment, curtailment of civil rights and liberties, especially the right to private property, which will apply to both large corporations and non-profit small and medium-sized enterprises. And all those companies that didn’t support Putin’s war against Ukraine.

— When there was a previous mobilization, there was a lot of talk that Russia would not be able to raise 300,000 because the people were against it. But somehow it happened that 330,000 people managed to mobilize. From the information you have now I have heard the figures that half a million soldiers are expected to be mobilized, how feasible is that for them now? How is the mood in society, how willing are you to go to the military commissariat?

— Most of them are not ready to go, but the question is, who will ask them? We are fortunate to live in a free, democratic state, just like the residents of many developed countries. And residents of the Russian Federation, North Korea, and apparently now Belarus too, don’t have such privileges. I think that shows both the interception and the communication with the prisoners, because many, especially the so-called partially mobilized, if they had a choice, would not have ended up in this unjust, bloody and criminal war against Ukraine.

But they have no choice, and the resistance gene in the modern Russian political nation has indeed been destroyed. We see that those who should protest are mostly trying to leave the territory of the so-called Russian Federation. This is the intelligentsia, the creative class, the middle class. And those who remain humbly go to the literal slaughterhouse, accepting the fact that their relatives return home in plastic bags.

Still, it won’t be easy, there will be resistance, especially the national republics, the indigenous peoples who already understand, at least their elites understand in many ways, that the physical survival of their people is at stake. Of course, we have already seen examples of successful protests in the Caucasus. At the same time, both the capital region and St. Petersburg have some protest potential, so I think we’ll see some outbreaks.

— If we now talk about mobilization, when will this new, fresh army be ready? Russia plans to train these people by spring or by summer? How long will it take to prepare a new army?

— This is not an entirely new army; it is part and complement of the already existing horde. And in this situation, in the second wave, they may be lucky enough to learn and practice a little more, regardless of what else they have to drive and shoot. After all, the question of providing weapons, armored vehicles and ammunition is already present in the Russian army today. But this first wave of mobilization, these 300,000, are the very ones who, as we see, are already being slaughtered indiscriminately according to Putin’s intentions.

— You already mentioned it, do you have any information about the general personnel situation in the Russian army? When this first mobilization took place, many photos circulated in which their machine guns were already rotten, they were walking around wounded, naked and barefoot. But one way or another, this army is running and advancing on Ukrainian positions, and there are a lot of them, these soldiers. What awaits the new conscripts, do they have something to fight for?

— Either way, we are dealing with a numerous enemy and with an enemy whose weapons, albeit outdated and not always of the right quality, (come) in large quantities. In particular, there is still a lot of equipment that has survived, which quantitatively, even taking into account improper storage and losses, still poses a threat to any army in the world. This is something Ukrainians understand very well, as does the rest of the world.

Today, the events surrounding Bakhmut and Soledar show very clearly that Putin made an unequivocal choice to fight with human power, to fight as Russians, regardless of ethnic origin, as a citizen of the Russian Federation. They will and are already compensating for the lack of equipment with the amount of men. Where there is a shortage of tanks and armored personnel carriers, they simply throw in more “Ivans” as cannon fodder.

Regarding weapons, they are given in numbers. For example, in the Russian army there are no problems with small arms. Quality isn’t always appropriate, and modernity isn’t even mentioned. Yes, they have colossal problems with uniforms, ammunition and clothing, especially seasonally. But who cares in the end?

But if a soldier is supposed to last a maximum of two weeks at the front, what’s the point of investing in modern weapons and ammunition? Therefore, the Russian command is not particularly worried about this. And in the numerous wiretaps that we hear, most of which are made public, this is very clear and openly visible.

Read the original article on The New Voice of Ukraine