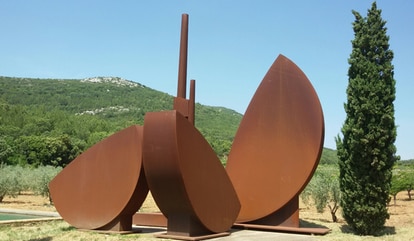 Image of one of the sculptures in the Miquel Navarro Open Air Museum with the peak of the Pico del Tejo in the background where wind turbines would be installed.

A wind project promoted by the Spanish multinational Acciona, with 10 planned windmills, will have a major visual impact on the open-air museum installed on his estate by the Valencian sculptor Miquel Navarro, winner of the National Prize in Fine Arts (1986) in La Alqueruela, in the Valencian town of Siete Aguas.

The multinational has included this area of ​​La Alqueruela in the special plan for wind zone number 9 of the Valencian Community. It is planned to install a total of 63 wind turbines distributed in eight wind farms in mountains that run between the towns of Camporrobles, Fuenterrobles, Utiel, Requena and Siete Aguas.

The sculptor has already criticized the project, pointing out, under environmental grounds, the negative impact that the park would have on the museum he has been building for years, “a legacy similar to that created by Chillida in Hernani”. , comments the 77-year-old creator. . “Would you dare surround this sculptural space with wind turbines?” he wonders.

The project has been in and out of public administration drawers for 20 years. Presented for the first time in 2001, discarded in 2009 and saved in 2020, it went on public display this month of December after being declassified by the Generalitat Valenciana in November.

What has become known has put the sculptor at war. For years, Navarro has installed some outdoor sculptures on a farm he owns. The creator is the only living Spanish artist with works in the Unesco collection in Paris, where he is part of a shortlist that includes only Picasso, Miró, Tàpies and Chillida. His most popular works are the enormous urban creations of monumental size.

With works in the most important museums in the world, from the Guggenheim in New York to the Reina Sofía in Madrid, from the Pompidou in Paris to the IVAM in Valencia, with pieces in the squares of cities such as Brussels, Barcelona, ​​​​Zaragoza , Vitoria and of course Valencia Navarro wants to crown his career with a kind of museum in harmony with nature, a proposal reminiscent of experiences like Chillida-Leku.

Many of the sculptures installed belong to the foundation bearing his name, which he created to organize the future of his personal collection of large pieces, a foundation that will also convert his workshop in Mislata into a permanent museum.

The totem poles of Navarro, inspired in some cases by the mountains in which they are located, now face the threat of windmills, structures over 40 meters high that would rise above the Pico del Tejo and destroy the museum . Adding to this is the threat of a cable mesh, as an electrical substation is also planned in the area where all the towers’ evacuation cables go, which will add to the impact.

In his struggle, Navarro is not alone. The Valencian Coordinator for the Rational Location of Renewable Energy, which brings together more than 50 associations from more than 40 municipalities of the Valencian Community, has called for a protest demonstration in Valencia this Saturday.

Under the motto “Renewable energies yes, but not like this!” the march starts at 12:00 p.m. at the Palais de Justice of Valencia and ends at 2:00 p.m. in the Plaza de la Virgen. The sculptor plans to take part and would like to go before it. Like the Cervantes character, Navarro decided to take a stand against the mills.

Navarro insists that the various groups mobilizing against the plan are not doing it “against renewable energy, but the way they’re doing it,” pointing out that in his particular case, “it’s an aberration against art and nature” tracking down that wind farm there.

In addition, the artist recalls that the area is also a protected area for the Bonelli’s eagle and that climbing bans are already in place in the vicinity by the Valencian Generalitat itself. He points out that the report by the NGO SEO/Birdlife recommends protecting perimeters with a radius of 15 kilometers around nests of birds of prey to ensure a safe camp, which would not be the case on this occasion.