Jeremy Renner might do a great job as Kingstown Mayor, but there’s no reason he really needs to look like it.

Out of respect for the star, who was recently hospitalized after a freak snowplough accident, Paramount+ updated his key art so Renner didn’t look so, well, damaged. The previous shot, taken to promote Season 2, which premiered Sunday, showed the actor with multiple facial cuts, which he is believed to have suffered after walking into last season’s prison riot.

In the new picture, Renner just looks kind of dirty, not hurt. 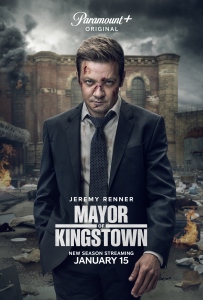 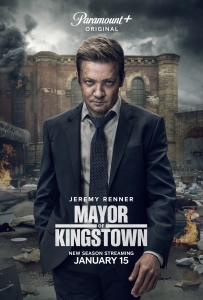 Renner has been in the hospital since Jan. 1 after a weather-related accident while plowing snow at his Lake Tahoe home. After undergoing two surgeries, Renner posted a picture of himself that looked eerily similar to the show’s original key art.

Earlier Tuesday, Renner told fans via social media that he has been discharged from hospital and is recovering at home after the snowplow accident on New Year’s Day that left him in critical condition.

In reply to a tweet Monday night, Renner said, “Out of my brain fog in recovery, I was very excited to watch episode 201 with my family at home.”

For more information on the Season 2 premiere, click here.