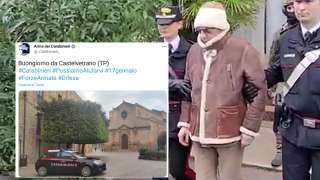 The Carabinieri mocked Matteo Messina Denaro, who was arrested in Palermo on January 16, 2023.

ITALY – Carabinieri’s holy snub to a man who has eluded them for 30 years. The day after the arrest of Italy’s most wanted gangster, Matteo Messina Denaro, the carabinieri (equivalent to French gendarmes) published on their Twitter account a photo of one of their cars parked in Castelvetrano, his birthplace.

“Hello from Castelvetrano”, ironically wrote the Carabinieri on this Tuesday morning, January 17th, without referring directly to Matteo Messina Denaro. Double snub: The Carabinieri’s car is parked in the square just in front of the Church…of Purgatory.

A few kilometers from Castelvetrano, in Campobello di Mazara, the godfather of the mafia has been hiding for several years. He was arrested in Palermo on Monday 17th and then transported aboard a military helicopter to Abruzzo, a region east of Rome overlooking the Adriatic Sea, and imprisoned in the maximum security prison of L’Aquila.

In Campobello di Mazara, the police searched a small, two-story apartment building painted yellow, where the godfather is said to have stayed for a long time. as you can see in the Corriere della Sera images below. Her apartment was comfortable and tastefully furnished. Inside, investigators found no weapons, only perfumes and luxury clothing.

The small building is under constant surveillance by the police, who prevent anyone from approaching it. Contacted by AFP, the Carabinieri refused to give details. Matteo Messina Denaro introduced himself to his neighbors as Andrea Bonafede with a valid ID and claimed to be a doctor.

The journey of Matteo Messina Denaro, a ruthless murderer at the head of a business empire, follows in the footsteps of the great historical leaders of Cosa Nostra, Toto Riina and Bernardo Provenzano, who died in prison in 2017 and 2016 respectively.

He was arrested on Monday morning on the sidelines of a medical visit to Palermo’s La Maddalena clinic, a prestigious facility where he was being treated for colon cancer under an assumed name. The doctor treating him, 70-year-old Alfonso Tumbarello, is under investigation.

He was very well dressed and wore a luxury watch valued at between €30 and €35,000. During his run, he “benefited from significant safeguards and the investigation is focused on those safeguards,” Palermo prosecutor Maurizio De Lucia, head of the public prosecutor’s office, said Monday night during a news conference.

The inquiry must determine whether “the last godfather of the Corleone clan” – clan made famous by The Godfather in cinemas – stayed on the island throughout its run, or if he also stayed abroad.

Matteo Messina Denaro, born in April 1962, took first place on the list of the six most wanted criminals in Italy compiled by the Ministry of the Interior. He was sentenced to life in absentia in 2000 for murder and in 2020 for the attack on anti-mafia judge Giovanni Falcone, who was assassinated in 1992 on the orders of Cosa Nostra.

Matteo Messina Denaro is one of the last great figures of Cosa Nostra, largely decimated by the incessant state operations following the assassination of judges Giovanni Falcone and Paolo Borsellino.

According to the daily Il Messaggero, the wealth amassed by the boss “would reach up to 4 billion euros” acquired through drug trafficking, extortion and money laundering.

See also on The Huffpost: