Please turn on JavaScript to use this feature

21 minutes: Spurs launch an immediate counterattack from Kulusevski, who is flying down the right flank when he is brought down by Mahrez. The City winger goes into the book.

20 minutes: Grealish dribbles down to the left and wins City a corner. Mahrez takes. Romero clears a header but Gundogan recaptures the ball and sends Grealish down the left touchline again. His low cross is answered by Alvarez, who slams in a first shot from 12 yards out. Dier is extremely good at spreading and blocking.

18 minutes: Ake crosses from the left. Perisic stands on the edge of his box and backs towards Lloris. The looping header has just enough height for Lloris to snap it out of the sky under pressure from Alvarez. City comes back soon after, Gundogan looks for Haaland in the left inner channel. Haaland falls as he strides into the penalty area and demands a clip from Romero, but the referee is uninterested and waves on.

16 minutes: Bentancur rolls a clever ball down the inside right channel to free Kane into the City box. Kane lashes his shot into the side netting, but that doesn’t matter, moments later the flag bangs for a clear offside.

15 minutes: Kulusevski makes too much of Emerson with a pass down the right flank. Emerson hunts anyway and is unceremoniously attacked by Ake for his troubles. Both teams are in full commitment mode tonight.

14 minutes: Rodri cheekily runs his boot over the back of Hojbjerg’s leg. Just a free-kick, but there’s another player who’s a little lucky not to get caught in the referee’s notebook too soon.

13 minutes: Mahrez straps the free kick straight into the Spurs wall. A bitter disappointment for the home fans, who groan accordingly.

12 minutes: Rodri tries to release Mahrez on the right flank but is hit by Davies mid-pass. The referee gets his yellow card out, but decides against warning the Spurs defender. However, it’s a free kick from 25 yards out, just right of center.

10 mins: Alvarez does well on the right and earns the first corner of the evening. All eyes on Haaland, who is lurking for the penalty spot. Mahrez lures it long. Haaland, who skilfully ran into the far corner, tries to dampen a lateral foot into the net from an acute angle. A strangely cautious attempt is deflected into another corner from which nothing happens.

8 minutes: Lewis causes an annoyance 30 meters in front of the goal, then puts it down on Gundogan, who almost releases Haaland into the penalty area with a delicate wedge forward. Just a little too much juice on the pass. A nice feeling for this game where both teams seem to be in the mood.

6 minutes: Spurs had 58 percent possession on those early rallies over Citying City. Conte will be happy with his team’s start. 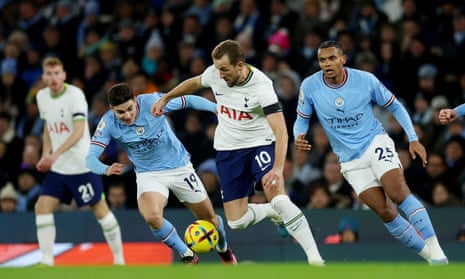 5 minutes: Lewis crosses from the right. Haaland climbs the highest at six meters, but does not get his head on the ball, which sails out of bounds for a kick. A few inches lower and Spurs was in a world of pain.

4 minutes: City patiently stroked it around the middle, claiming some home dominance.

2 minutes: Kulusevski presses straight for Ederson, but the City keeper doesn’t panic with the ball at his feet and clears his lines. City hearts in the mouth for a nanosecond there.

Spurs – who are looking to become the first team to win three games in a row against a side led by Pep Guardiola – get the ball rolling. They pass it around the back a bit, then Son and Perisic almost make some ground down the left with a crisp one-two. Throw to City, but a very early proactive play by Spurs.

The teams are out. City wear their sky blue while Spurs wear lily white. Visitors also wear black armbands in memory of their former player Anton Walkes, who died after a boating accident this week.

A quick reminder of how this game has evolved over the last season. Forget amazing. Forget sensational. It was really psychedelic. Please more, city! Please more Spurs!

Antonio Conte speaks gnomically to Sky Sports. “Rodrigo [Bentancur] is an important player for us, with [Pierre-Emile] Hojbjerg. They don’t play many games together, but they always perform well. We have to start winning and then we’ll see what happens.”

Pre-game positivity: Tottenham Hotspur way. “I laughed at that tweet when it was first posted,” Yash Gupta begins…

In the interests of safety, I propose that we forgo the usual 6 points that we deduct from Manchester City each season.

“…and so far it’s been the only save this season. It’s funny every time I read it. This season has been hugely disappointing so far, starting with thinking Conte is nothing like Mourinho to realizing Conte is a Poundland Mourinho. Anyway, if Spurs win, Arsenal become favorites and if Spurs lose, Conte could leave. Looking forward to a 3-0 win for Tottenham with 15% possession. Bring it on!”

Adds Alexandra Ashton: “I’m surprised that both Lloris and Son are starting today. Lloris’ performance against Arsenal had Forster nailed to start (I had thought) and Son has been so poor all season that Richarlison deserves a start. Kane isn’t sinking deep into that midfield role like he was used to last season and Son is really suffering from his inability to latch on through balls from deep. It would certainly be representative of our season so far if we beat City home and away and give Arsenal the title. Bizarre inconsistency with flashes of good performance.”

That’s the spirit, folks. All aboard the emotional roller coaster! Dissatisfaction Guaranteed!

Pep Guardiola – who turned 52 yesterday and will be delayed ♫ Happy Birthday 🎶 – speaks to Sky Sports. “Even if we had won at Old Trafford, that would be important. Last season we lost six points to Spurs. Rico Lewis played really well, he reads the positions and that’s why he’s picked. It’s a big responsibility, he’ll play against Son, Kulusevski, Kane but it’s a perfect choice tonight. We have some game patterns that we need to reignite. The solution is not to do anything that we haven’t done in seven years because we’ve won four Premier Leagues in five years. If I think we should do something differently, I’d be stupid because it works! So you have to try again. Sometimes you forget. It’s up to me to find the patterns!”

Manchester City have lost the last two games. As a result, they are eliminated from the League Cup, eight points adrift of Premier League leaders Arsenal. Pep Guardiola has poked fun at how he doesn’t care, it’s all gone, but calm down and come on. He will still be desperate to add City’s name to an elite list of three-time champions alongside Huddersfield Town, Arsenal, Liverpool and Manchester United.

Three points tonight and it’s on again as Arsenal face the in-form United at the weekend. At first glance you’d expect City to move past the troubled Tottenham, who are stuttering in fifth place and somehow clinging to the fringes of the top four race despite a string of unconvincing performances. But some teams only have your number and Spurs have made a habit of angering City in recent years, not least last season when they made the double over them. That could be fun in one way or another. Kick-off is at 20:00 GMT. It’s on!