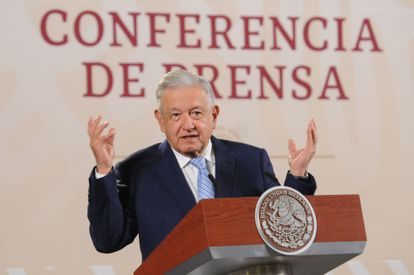 The President of Mexico, Andrés Manuel López Obrador, agreed this Wednesday to consider the application by Joaquín El Chapo Guzmán, former leader of the Sinaloa cartel and one of the most famous drug traffickers in history, to serve his sentence in Mexico. However, Foreign Minister Marcelo Ebrard told the press that he didn’t see many options for the transfer to go through. In 2016, after twice escaping two prisons in Mexico, the drug dealer was arrested and extradited to the United States, where he has been serving a life sentence since 2019.

His lawyer on this side of the border, José Refugio Rodríguez, sent a letter to Mexico’s ambassador to the United States, in which El Chapo denounced the mistreatment he received during his years in captivity there. “It took six years without seeing sunlight,” the criminal lamented about his attorney. The one who was the largest drug trafficker in Mexico for more than 15 years managed to attract the attention of the country’s president. “Yes, we will check it. When it comes to human rights, there are ways,” stressed the President at his morning conference. His extradition request is now with the State Department after El Chapo’s Mexican attorney sent the request to the Mexican Embassy in the United States. In it he defends that the criminal was extradited abusively and that there are ways to organize his return to the country because “criminal proceedings against him are pending” here.

On Tuesday night, Ebrard referred to the case with these unpromising words: “He’s serving a sentence there. He has a sentence. To be honest, I don’t see any possibilities for that, but we will analyze it.” In the letter, sent to Mexico and reproduced by his attorney, the criminal complains about the conditions he is living in at ADAMAX, the maximum-security prison where he is being held in Colorado. “I am asking President López Obrador to intervene so that I can return to Mexico and try my case in a Mexican prison,” El Chapo said in the letter, to which journalist Ciro Gómez Leyva had access.

“The conditions I find myself in are degrading, notorious and inhuman,” the letter continued. The criminal says he craves the sun: “In the last 6 years that I’ve been in prison, they never took me out of my cell to get some sun, not even for a minute.” He also says that he is rarely allowed to speak to his lawyer or his family and that, apart from the lousy food he is given, he only leaves his cell for a “room two meters wide and two point five meters long”. , but the sun does not hit “.

It’s not the first time El Chapo has resorted to maps to draw attention to his situation. Two years ago, in a letter to a US court, the prisoner complained about the “cruel and unfair” treatment he was receiving. “As a result of treatment at ADAMAX, I now suffer from headaches, memory loss, muscle cramps, stress and depression,” wrote the drug dealer, who then lived in a cell 10 feet long and 6 feet wide. The only human contact he had was with the guards, who handcuffed his hands and feet before taking him out of his cell.

El Chapo’s attorney’s letter and media interventions come at a difficult time. A few weeks ago, one of his sons, Ovidio El Ratón Guzmán, was arrested in Jesús Marías, a parish near the city of Culiacán. The operation unleashed violence in a day of terror when members of the Sinaloa Cartel sowed chaos in the city, setting fire to vehicles and blocking roads to prevent the arrest of their leader. At the same time, the trial of Genaro García Luna, former secretary of the Ministry of Public Security, begins in New York. He is accused of working with the same Sinaloa cartel that El Chapo ran for more than 20 years.