There used to be a lot more stars in the sky? This impression is not misleading. Light pollution in the night sky is increasing much more than previously expected, causing the visibility of stars to drop dramatically. This is the result of an analysis published in the journal “Science”, for which scientists evaluated the observations of 51,351 people – mainly in Europe and North America – between 2011 and 2022.

The researchers led by Christopher Kyba, an expert at the GFZ German Research Center for Geosciences in Potsdam and Ruhr University Bochum, were both surprised and concerned. “The speed at which stars are becoming invisible to people in urban environments is dramatic,” Kyba pointed out.

Will the “Big Bear” be invisible to us one day?

If we take the global average of 9.6% more brightness in the sky each year, that means that a child who is born in a place where 250 stars are visible at birth will not be there until he turns 18. Kyba told the German Press Agency.

People will no longer be able to enjoy twinkling stars in the foreseeable future, will the “Big Dipper” or “Libra” in the firmament become invisible to the naked eye? Kyba said: “I hope the trend doesn’t continue like this, that there are more countermeasures. It’s up to us.”

Serious consequences for the environment

The problem has been growing rapidly for a long time, he said. If the sky glows in an artificial twilight long after sunset, this has negative consequences for stargazing and astronomy. And that’s not all: scientists warn that there will also be serious consequences for the environment.

Many behaviors and physiological processes of living beings are determined by daily and seasonal rhythms and are therefore influenced by light, explained US co-author Constance Walker. “Sky glare affects both day and night animals and also destroys an important part of our cultural heritage.”

Appropriate measurement methods are needed to get more information about serious developments, Walker warned according to the announcement. Satellites are not accurate and sensitive enough for this. Previously, based on satellite data, an annual increase in brightness of about 2% was assumed, and there were even hints of a minimal decrease.

Around 50,000 people looked up at the stars for the project

About the project’s methodology: The approximately 50,000 “civic scientists” observed the night sky with the naked eye and filled out an online form to indicate which of the eight star maps best matched what they had seen. Each map showed the sky with different levels of light pollution. The information represents 19,262 locations worldwide, including nearly 3,700 locations in Europe and nearly 9,500 in North America. In addition, a sky brightness model based on satellite data from 2014 was used.

The Association of Friends of the Stars – the members are amateur astronomers, public observatories and also planetariums – pointed out that even today in densely populated regions it is almost impossible to see the starry sky with the naked eye. In conurbations like the Ruhr area and in metropolitan areas, “unfortunately, you can see very little”, says Andreas Hänel.

Light can be seen 80 kilometers from Berlin

Berlin’s light bell is so large that it can be seen from up to 80 kilometers away. There are more and more projects and local measures to reduce artificial light, but they are not enough.

The association demanded that environmental protection also include the sky. The legislator recognized light emissions as a problem and included them in the Federal Imissions Control Act, reported Hänel. However, mandatory limit values ​​are required. The environmental organization BUND has also warned of negative effects on the ecosystem, flora and fauna. In humans, a disturbed day and night rhythm as a result of increased night lighting can suppress the production of the “sleep hormone” melatonin and cause sleep disturbances.

Where Germans still have a good view of the stars

Kyba emphasized: “Compared to other countries, Germany lights very conservatively, that’s good.” Regions with dark skies and still good views of the stars included Eifel, Rügen and Mecklenburg Lake District. However, he believes there is a need for even greater awareness, significantly greater light savings and uniform regulation for street lighting.

Hänel believes that if there is no real rethinking, “in the future there will only be a few places where you have to travel a lot to see the stars well”. (dpa/af) 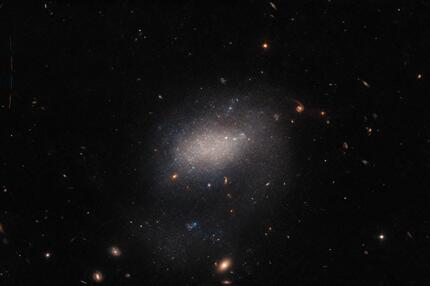