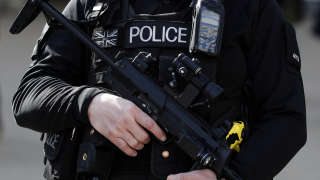 ADRIAN DENNIS / AFP An armed British police officer holds his automatic weapon while on duty in central London March 22, 2016. – Britain has stepped up security at its international transport hubs following the deadly attacks in Brussels today, as Prime Minister David Cameron called on Europe stand together against the threat of terrorism. A series of blasts rocked Brussels airport and a metro station on Tuesday, killing at least 21 people, according to firefighters, as Belgium ramped up its terror threat to the max. (Photo by ADRIAN DENNIS / AFP)

London: David Carrick, a police officer, admits to 24 rapes and multiple assaults (Illustrative photo of a London police officer in 2016)

LONDON – This is one of the “most shocking” cases involving a police officer, according to British prosecutors. An officer admitted to a total of 24 rapes and numerous sexual assaults over a 17-year period on Monday January 16, sparking criticism of London Police.

“On behalf of the Metropolitan Police, I would like to apologize to the women who suffered under David Carrick,” Deputy Commissioner Barbara Gray said. “We should have recognized his behavior and by not doing so we missed opportunities to remove him,” police said.

On Monday morning, David Carrick, a 48-year-old police officer, pleaded guilty to four counts of rape in a London court. On December 13, he had already admitted to 43 crimes, including 20 rapes, and sexual assault. Facts between 2003 and 2020.

Suspended since October 2021, he was formally released by police on Tuesday 17 January. “This is a horrific and disgusting case with serious consequences for the police. I really hope I never see anything like this again,” Deputy Commissioner Louisa Rolfe said during a disciplinary hearing on Tuesday morning.

Testimonies of new victims following media coverage of the case

The case brings back memories that shocked the country of the death of a 33-year-old Londoner, Sarah Everard, who was raped and killed by a police officer in March 2021. David Carrick was part of the capital’s police force responsible for protecting Parliament and diplomatic posts within the Metropolitan Police (Met), the London police force.

He was arrested in October 2021 for a first rape case. “As press interest followed, other victims came forward. (…) The weight of their testimonies was extremely strong,” Chief Inspector Iain Moor said in court, expecting more victims to come forward.

David Carrick met some women on online dating sites or on dates and used his position as a police officer to gain their trust.

The policeman tortured his “slaves”

He admitted to raping nine women, some repeatedly, over months or even years. He locked the victims in a small cupboard under the stairs in his house for hours without food. He called some of his victims his “slaves”; he controlled them financially; he isolated her from her relatives.

“He loved to humiliate his victims and used his professional position skillfully to make them understand that there was no point in seeking help because they would never be believed,” explained Iain Moor. He dealt with his victims “in the most destructive way”.

Met boss Mark Rowley apologized and acknowledged that Carrick may have acted because of “systemic errors.” “We failed and I’m sorry. He shouldn’t have become a cop,” he insisted.

Another case sparked fear in the UK in March 2021. Police officer Wayne Couzens raped and killed a London woman, Sarah Everard, whom he had handcuffed in a false arrest before kidnapping her. This agent was sentenced to life imprisonment. The police had been accused of ignoring alarming signals about the killer’s behavior.

“Police forces must eliminate these officers to restore public confidence, which has been shaken by cases like David Carrick,” said a spokesman for Prime Minister Rishi Sunak.

“I am absolutely disgusted by the truly heinous crimes committed by David Carrick,” said London Mayor Sadiq Khan. “We have serious questions to answer about how he abused his position as a police officer.”

In November, a report highlighted deficiencies in the recruitment and monitoring of police officers and revealed the extent of misogynistic, sexist and even rapacious behavior. “It’s too easy for the wrong people to join the police and stay with the police,” said Police Inspectorate Matt Parr.

David Carrick has pleaded guilty, there will be no trial. A hearing to announce his verdict will take place from February 6th.