The Graceland estate has begun preparations for Lisa Marie Presley’s memorial as her gravesite is across from her father’s.

Presley’s official cause of death was postponed Tuesday by the Los Angeles County Coroner. The coroner has requested further inquiries into the singer’s death and additional studies.

“Once the tests/studies come back, the doctor will re-evaluate the case and determine the cause of death,” coroner’s spokeswoman Sarah Ardalani told CNN.

Presley died of cardiac arrest last week at the age of 54.

Elvis’ daughter, who found the King of rock ‘n’ roll dead at the age of nine, feared her own mortality and referred to the backyard of the Graceland estate – where she will be buried at 9am this Sunday – as a “cemetery “.

“How many people have a family plot in their backyard? How many people are reminded of their fate, of their mortality, every damn day? All the graves are lined up and there’s a place waiting for me right next to my grandmother,” she told Playboy in 2003.

Preparations are underway for Lisa Marie Presley’s burial site, which will be positioned alongside her other relatives at Graceland along the backyard fountain 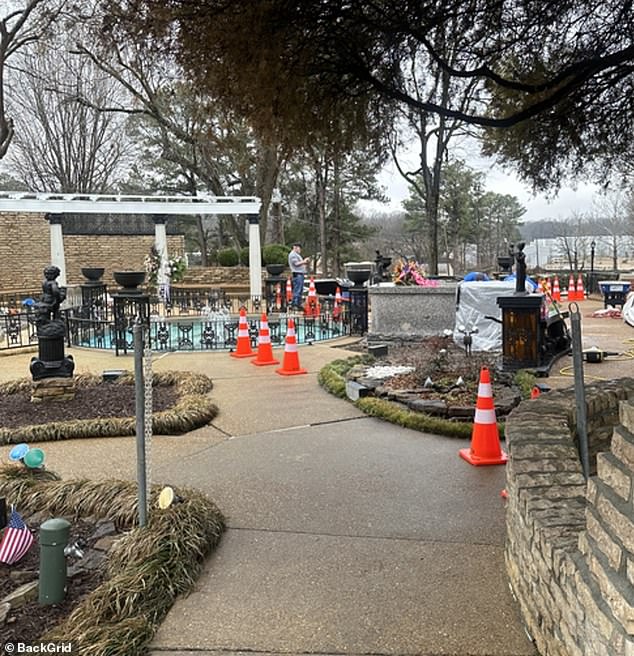 Workers dig her grave, which is right next to her son and almost directly across from her father’s (bottom left).

Preparations are underway for her burial site, which will be positioned alongside her other relatives at Graceland along the backyard fountain.

The mother of four is buried next to her son Benjamin Keough, who took his own life in 2020, and almost directly across from her famous father’s grave.

Sources told TMZ that a stage and backdrop will be built on the front lawn of the mansion. It’s unclear who will speak at the service, but it will be open to the public. 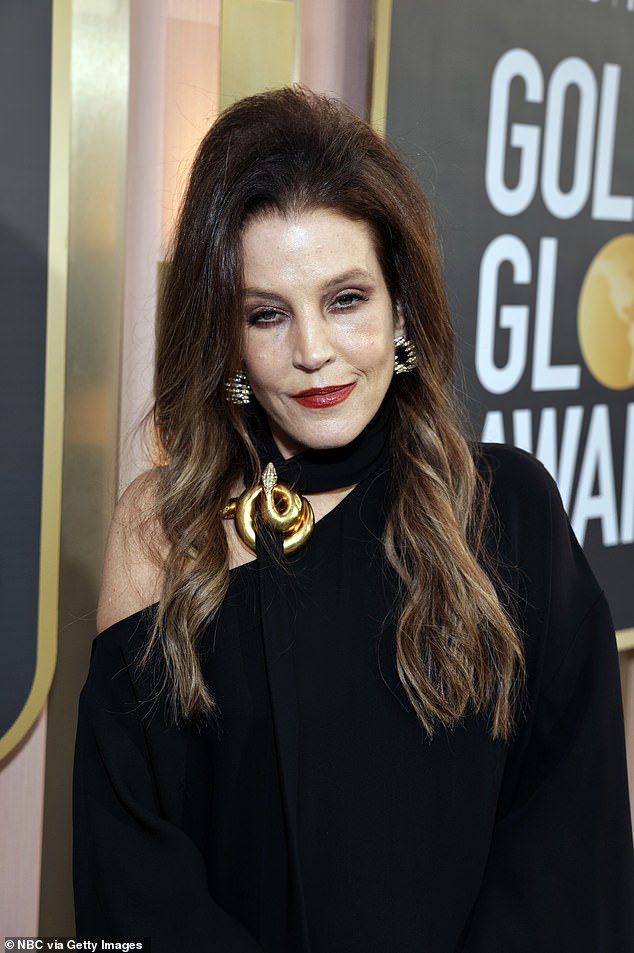 Presley, who died of cardiac arrest last week at the age of 54, will be buried this Sunday at 9 a.m. at the family home in Memphis

Additionally, 24-hour camera coverage at Graceland is now focused on the front building as preparations that began Tuesday continue.

Since her death, fans have come to lay flowers at the front gate of the property to honor the singer.

Presley died on January 12 after suffering a second cardiac arrest in the hospital. Her family signed a do not resuscitate order.

The 54-year-old only child of Elvis and Priscilla Presley was rushed to hospital Thursday morning after she was found collapsed at her home in Calabasas by her housekeeper.

Paramedics who got to her home managed to revive her and she got a pulse again, but she was brain dead on arrival at the hospital, TMZ reported Friday.

The family rushed to her bedside, where she was in an induced coma and on life support. When they learned that she was already brain dead, they signed a “do not resuscitate” order.

She suffered a second cardiac arrest and died.

Her mother Priscilla, 77, was at her bedside.

“It is with a heavy heart that I share the devastating news that our beautiful daughter Lisa Marie has passed away,” Priscilla Presley said in a statement Thursday night. 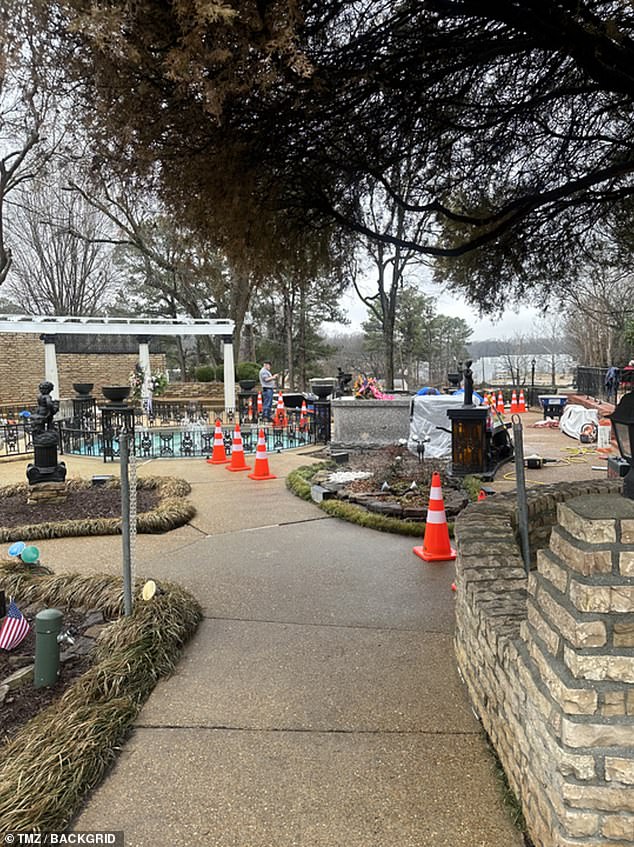 Preparations reportedly started on Tuesday, and a stage and backdrop are also set to be built on the front lawn

Ex-husband Danny Keough – her first of four with whom she lived – had returned to the home shortly after her collapse and performed CPR until paramedics arrived.

Her fourth husband, Michael Lockwood, is the father of Presley’s 14-year-old twin daughters, Harper Vivienne and Finlay, who have said they will not return to the home where their mother died. 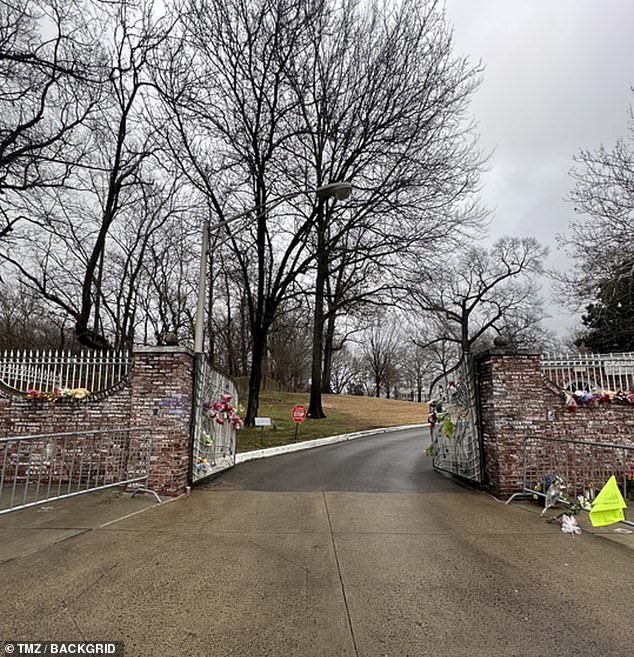 Since her death, fans have come to lay flowers at the front gate of the property to honor the singer

And on Sunday, the singer-songwriter told the doting crowd at her father’s Memphis estate that they were the “only people who can get me out of the house” to celebrate his 88th birthday.

Fans said the King of Rock ‘n’ Roll’s daughter, who hasn’t posted to Instagram since August, looked ‘incredibly saddened’ and ‘really hurt’ two years after the suicide of her son Benjamin Keough, who is buried next to her. from Elvis at Graceland.

Furthermore, Presley was so traumatized by her father’s death – and the discovery of his body when she was nine – that she spent the next 35 years trying to be “cured” by Scientology, according to the claims of her former counselor Karen De La Carriere .

De La Carriere, known as the “Queen of Scientology,” was a senior member of the church for 35 years. 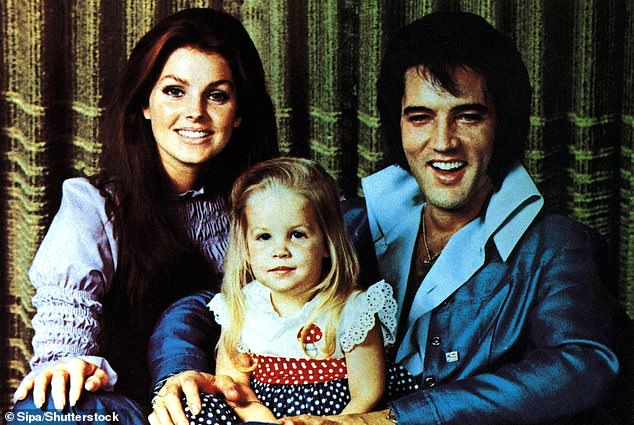 Lisa Marie with her parents in 1970. Presley found her father dead when she was nine

She said that Priscilla Presley, who turned to Scientology to ease the grief of Elvis’ sudden death in 1977, used the church to help control her daughter’s behavior problems.

As a result, Lisa Marie, who was only 11 at the time, and her mother endured a “hostile relationship” and found themselves in “mortal throes” for the rest of their lives, De La Carriere claims.

The counselor became Presley’s auditor – Scientology language for counselor – and said that Presley was placed in “obedience therapy” as a schoolgirl.

De La Carriere said Elvis would never have allowed that if he had lived.