Chris Amaya-Pineda, 13, and his brother Damian Amaya-Pineda, 2, have both died after being involved in an accident at the intersection of Main Street and 111th Place on Jan. 9.

Chris was killed by the sheer force of the crash, but little Damian survived for several days before dying on January 16.

At a vigil Monday night, the boys’ mother Debbie Amaya – who was also in the car with her 16-year-old daughter when it was hit – said she will “forever hate” the driver, who has not yet been arrested. this incident.

Debbie broke down in tears while speaking to local media at Monday night’s vigil for her two boys, but said she was trying to stay strong for her surviving daughter.

The accident happened when the family was on their way to grandmother’s house.

The family was in their SUV when the driver of a speeding Mercedes-Benz sedan passed a red light just before 8am and rammed into their vehicle. The impact was so severe that the SUV was thrown against a fence and a parked vehicle.

The family was just two blocks from their home in the Broadway-Manchester neighborhood. Debbie was driving at the time and said she had beaten herself up in the week since the fatal crash.

“This family is completely broken leaving the rest of the family (us) to help pick up the pieces,” read a GoFundMe organized for the family. 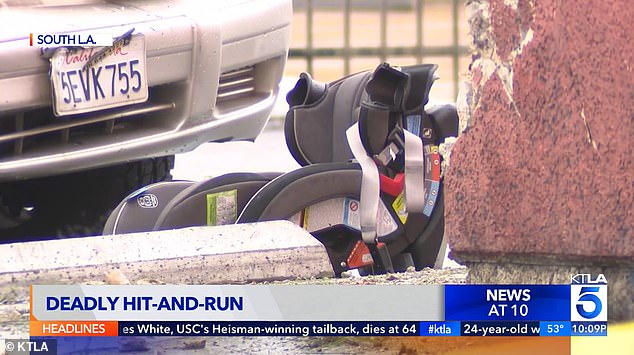 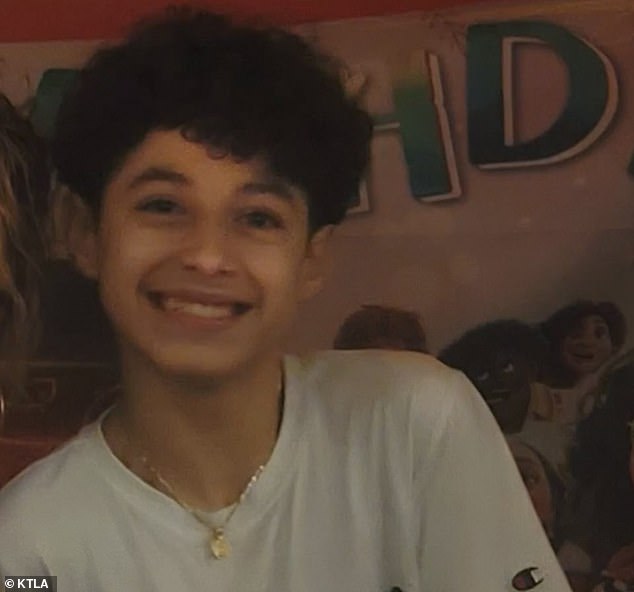 Chris was killed by the sheer force of the crash, family and law enforcement officials said 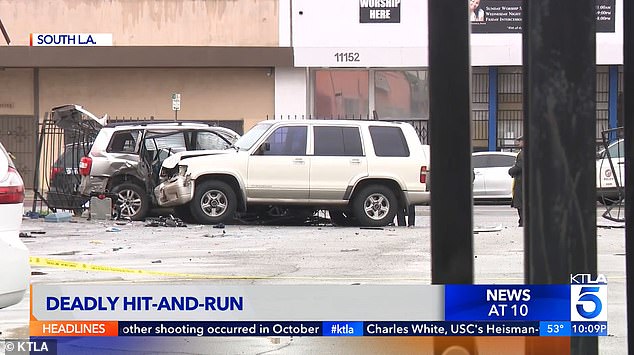 Several cars were badly damaged in the crash 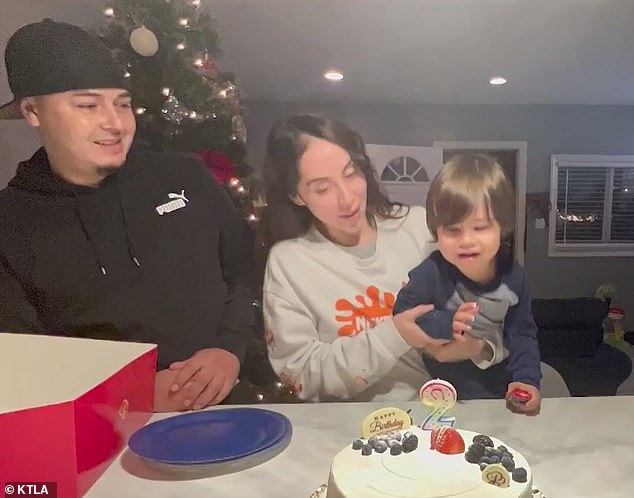 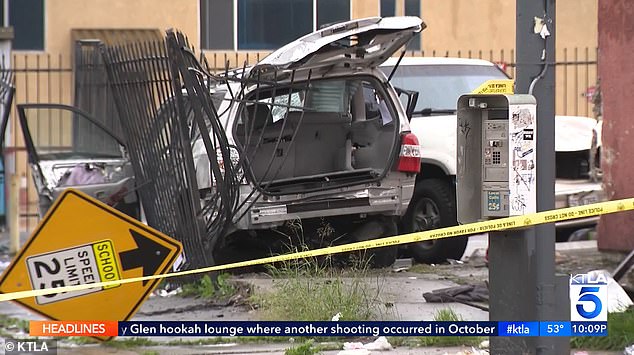 Officers cordoned off the crime scene for hours to investigate

The mother herself was only recently discharged from hospital after being in intensive care for serious injuries sustained in the accident.

Jade Amaya-Pineda, 16, was not seriously injured in the accident but has spent the past week reeling from the loss of her brothers.

“I told her everything will be fine,” Debbie said of her daughter.

“She is stronger than me. She tells me to be strong. She even told me she feels bad for making it alive. And I told her not to feel that way,” Debbie told KTLA. 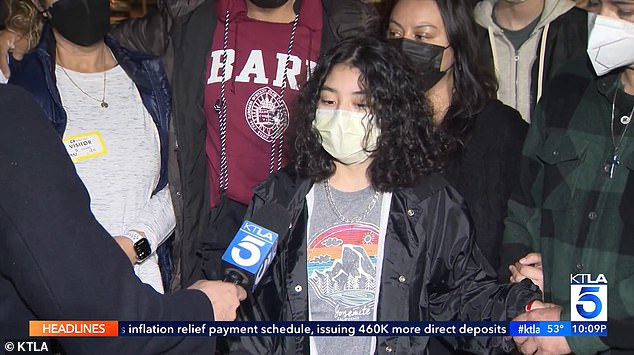 Relatives spoke to the media during Monday’s vigil 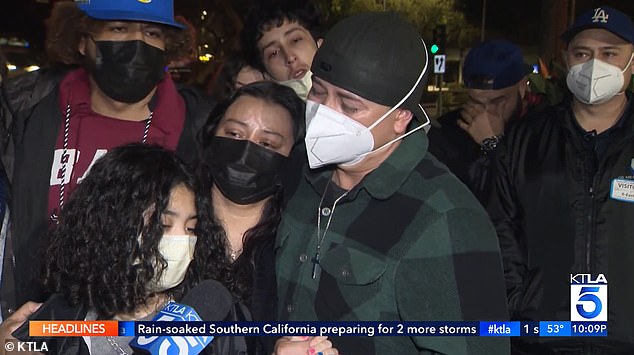 The family said they were sad and devastated by the accident

The driver of the Mercedes who struck the family’s SUV fled the scene on foot after the accident.

Police have spent the last week looking for the man.

On Monday night, Debbie asked the person to come forward and face justice for their actions. 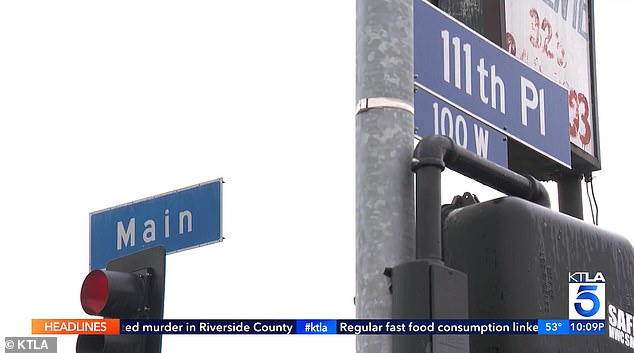 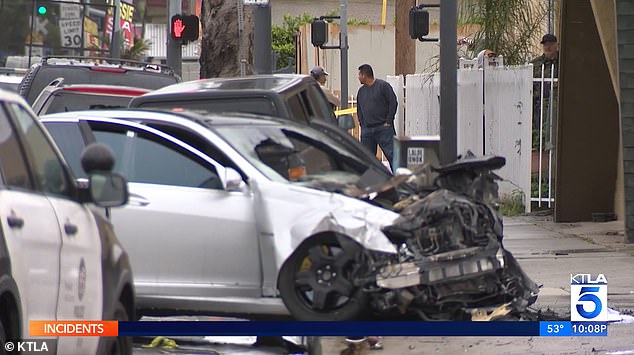 This was one of the cars after the accident

“I’ve never seen anyone be so heartless — just scramble and leave,” the witness said.

Another woman who spoke to FOX LA said she begged the driver before he fled.

Police searched nearby hospitals as they believed the driver may also have been injured in the collision.

If he is arrested, police officials say he will most likely face hit-and-run charges.

Before the toddler died, his aunt said he was severely injured from the injuries sustained in the accident.

“If there’s a miracle, doctors say he’ll most likely be paralyzed,” Julie Amaya, the children’s aunt, said of the boy.

“He won’t be the same little Damian he was,” Julie said.

The family eventually announced the boy’s death in an update on GoFundMe organized for the family.

“The doctors did everything they could to save little Damian’s life, but his injuries were far too serious,” the update reads. “We all fired so much for little Damian,” the family said.