Jeff Bezos made a surprise appearance at a Washington Post editorial meeting for the first time in over a year on Thursday morning.

His presence in person sparked fears among staff about the severity of the upcoming layoffs at the newspaper, which he bought in 2013 with ambitions to lead it into the digital age.

In recent years, The Washington Post has suffered from dwindling advertising revenue, a decline in website traffic, and a lack of new subscribers. Last month, editor Fred Ryan announced layoffs are coming in the new year.

Despite his suggestion that the cuts would likely only affect a “single-digit percentage” of its 2,500-strong workforce, the news sparked a frenzy among staff and the newspaper’s union membership grew.

Its union guild said it now has about 670 members, about 67 percent of those eligible, and about 60 of them have joined since the December announcement.

Little information was provided to employees about the layoffs, and last month Amazon’s CEO declined to comment, meaning his visit on Thursday only added to the panic. 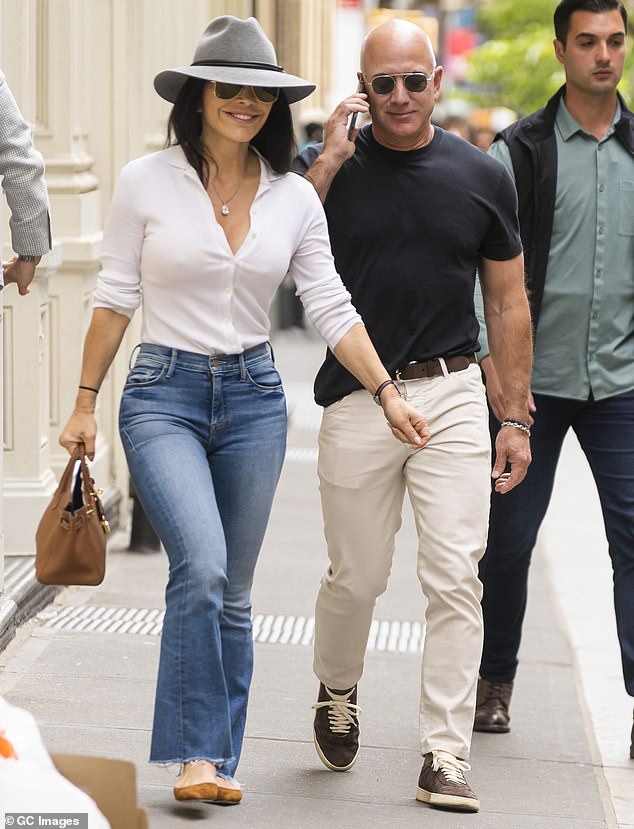 His presence in person sparked fears among staff about the severity of upcoming layoffs at the newspaper, which he bought in 2013

‘[People] I don’t know what to make of it,” one journalist told The Daily Beast.

During the meeting, Bezos remained rather withdrawn as he sat next to Post Editor-in-Chief Sally Buzbee in a glass-windowed office on the sixth floor of the paper’s headquarters.

“I am very happy to be here and to see all these faces,” he announced at the beginning of the meeting, the New York Times reported. “Thanks for letting me listen,” he continued.

As he was leaving the meeting, an employee in a red shirt with union badges stopped him and asked why he planned to fire employees without offering them severance pay.

Bezos responded that he came to listen — not to answer questions — but stressed that he’s devoted to the Post’s journalism.

“As Bezos walks through the office, we want him to see that the Post staff are a strong and united front,” the guild wrote in an email to its members the day before. 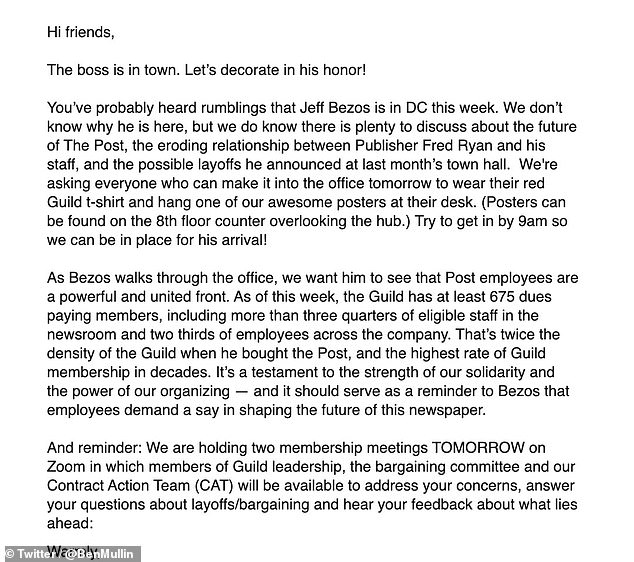 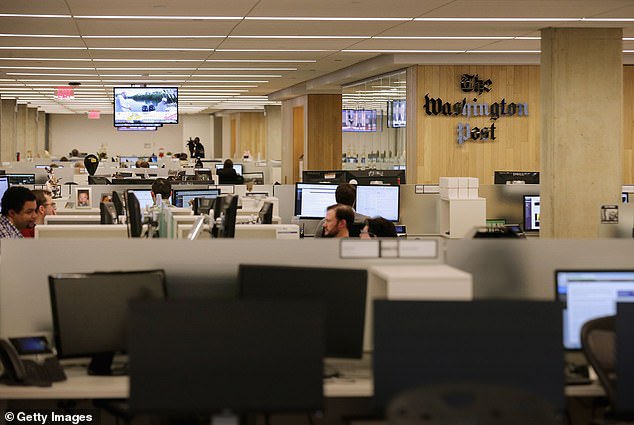 A spokesman for The Post confirmed the layoffs would take place later this year, but didn’t say exactly when

Today we came to the so-called WaPo City Hall with questions about the recent layoffs and the future of the company.

Our publisher dropped a bombshell on us by announcing more layoffs and then leaving, refusing to answer any of our questions. pic.twitter.com/ajNZsZKOBr

A public statement on Thursday said: “We hope that Washington Post owner Jeff Bezos has heard staff pleas for an end to these imminent layoffs, which, as far as we can tell, are not financially necessary or in any way.” sound business strategy from publisher Fred Ryan.’

“Jeff is visiting The Post this week and meeting with Fred Ryan, Sally Buzbee and other staff,” a The Post rep wrote in an email to The Daily Beast.

The spokesman confirmed the layoffs would take place later this year, but didn’t say exactly when.

The outlet reported that the meeting played out like any other day, with editors discussing breaking stories and trends in the news.

At one point, an editor mentioned that he plans to run a story about the termination of AmazonSmile – one of Bezos’ charitable ventures. This story was published on Thursday at 11:37 am.

On Wednesday, around 18,000 Amazon workers woke up to the news that their jobs had been terminated “effective immediately.”

The layoffs were the latest in a series of Amazon cost-cutting measures overseen by Bezos.