By Ashley Nickel for Chron Australia

Ceramic artist Joana Partyk and Ballardong Noongar man Desmond Blurton spray-painted a Woodside logo on Fredrick McCubbin’s painting Down on His Luck at the Art Gallery of Western Australia in Perth on Thursday.

A cameraman filmed Partyk painting the logo over the famous piece while Blurton laid an Indigenous flag on the ground in front of them.

The Art Gallery of Western Australia told Chron Australia the painting was covered by a piece of Plexiglas and was not damaged in the protest.

“As I stand here today, a work of art sacred to our people is being destroyed,” Blurton said, while Partyk taped her hand to the gallery wall.

“Woodside is running the largest fossil fuel project in Australia, they are destroying ancient rock art.

“We don’t ask for any industry on the Burrup. We must protect our cultural heritage and hard work now.”

The Burrup Peninsula, 850km southwest of Broome, is home to one of Australia’s largest collections of Indigenous rock art.

However, it is also home to the Karratha Gas Plant, which is owned by Woodside and produces liquefied natural gas (LNG). 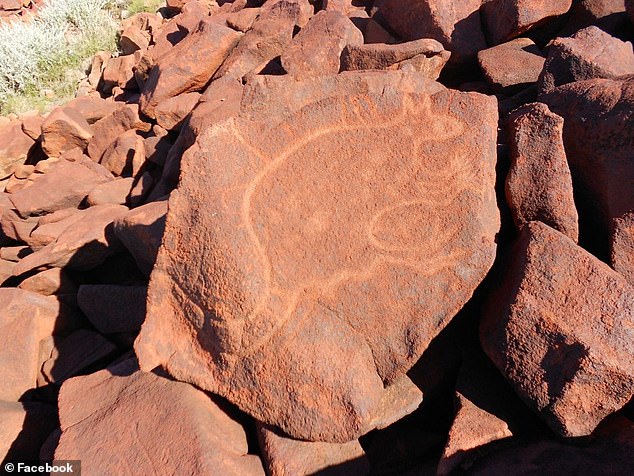 The couple protested Woodside’s LNG facility on the Burrup Peninsula — home to a large collection of ancient Indigenous rock art (above). 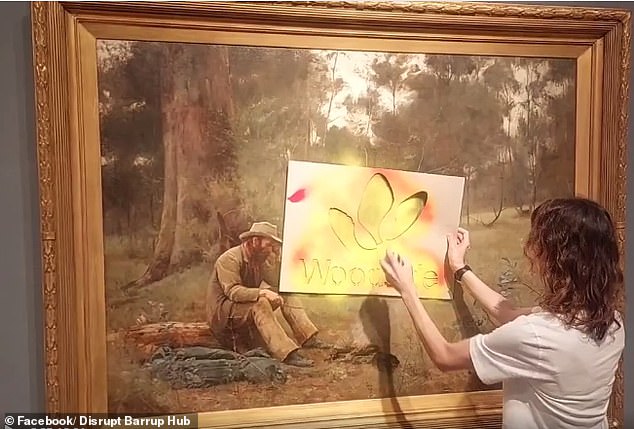 Disrupt Burrup Hub protesters believe Woodside’s presence in Burrup threatens both Indigenous culture in the area and the environment.

“This painting is barely 100 years old, we have 50,000 year old artwork that Woodside is destroying,” Blurton said.

Partyk followed Blurton’s speech with one of his own, saying Woodside was threatening “Australia’s oldest and most important art gallery”.

“We know that the Woodside burrup hub will emit six billion tons of CO2 (carbon dioxide) by 2070.

“Woodside likes to adorn everything with their logo while spraying their toxic fumes on sacred rock art everywhere.

“We must stop any further industry on the Burrup, otherwise there will soon be no more art.” 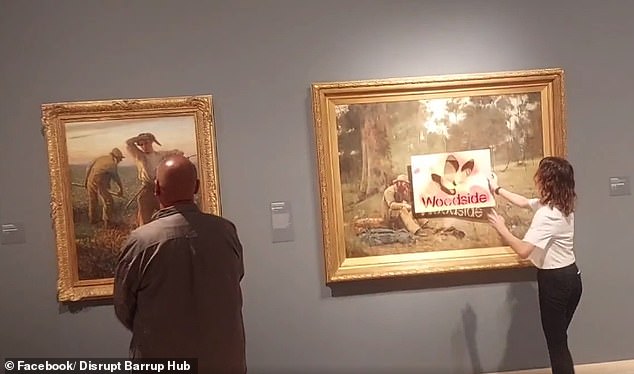 Blurton (left) said the Down on His Luck painting was “barely 100 years old” and accused Woodside of destroying “50,000-year-old art”.

Security approached the couple as the video ended. It is not yet known if they have been charged in the incident.

Sydney 2GB radio presenter Deborah Knight slammed the protesters for destroying an iconic Australian work of art estimated to be worth $3 million.

“Why can’t they leave art alone?” she said.