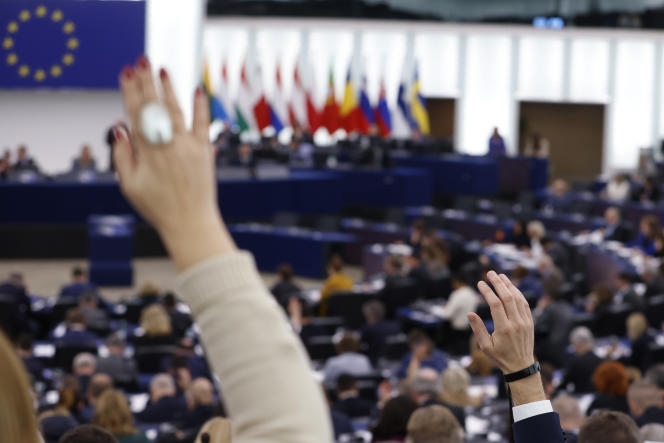 European lawmakers will elect a new Vice-President of the European Parliament on Wednesday 18 January 2023 in Strasbourg. JEAN-FRANCOIS BADIAS/AP

It is a very short resolution on the situation of Moroccan journalists, which was adopted on Thursday 19th January in the European Parliament by 356 votes to 32, with 42 abstentions… And it is a small revolution within the institution, based on the plenary session in Strasbourg. It took “more than twenty years and a corruption scandal like ‘Marocgate’ before the European Parliament was finally able to speak about Morocco and human rights,” sighed Wednesday’s Miguel Urban Crespo from the left-wing faction group that initiated this resolution.

In particular, this text of less than 500 words “calls on the Moroccan authorities to respect freedom of expression and freedom of the media and to grant jailed journalists, in particular Omar Radi, Soulaimane Raissouni and Taoufik Bouachrine, a fair trial with all the guarantees of ‘ due process”. They “Strongly condemns the use of allegations of sexual assault to prevent journalists from carrying out their duties” and “believes that such assaults endanger women’s rights”.

But he goes on. Supported by left-wing groups, environmentalists, but also liberals and sovereignists, the text indicates that the Strasbourg Assembly is “concerned by allegations that the Moroccan authorities have tried to corrupt elected members of the European Parliament”.

This marks a real change of position of the European institution towards Morocco. In the past twenty years, the European elected representatives have rarely voted on texts affecting one of the European Union’s main African partners. According to the European Parliament’s database, Morocco has been mentioned in half a dozen texts, notably in the agricultural and fisheries agreements between the Union and that country. But no one addressed the issue of human rights.

This issue comes after the outbreak of the corruption case in the European Parliament that led to the arrest of former Italian MEP Pier Antonio Panzeri on December 9, 2022. These investigations were initially decided by the Belgian secret services against Morocco after suspected corruption. The investigation was then extended to Qatar, which is suspected of also having funded this former European elected official.

In Strasbourg, Moroccan diplomats and elected officials were also very present in the corridors of the building at the beginning of the session. “They come very regularly,” confirmed multiple sources. On Tuesday 17th January and Wednesday 18th January, four Moroccan MEPs, all members of the Morocco-EU Joint Parliamentary Committee, met, notably in the MEPs’ bar, with European elected representatives “to discuss issues of common interest and to discuss the human rights situation,” said an email obtained by Le Monde and sent to the various political groups, signed by Lahcen Haddad, the Moroccan co-chair of that commission.

You still have 65.04% of this article to read. The following is for subscribers only.