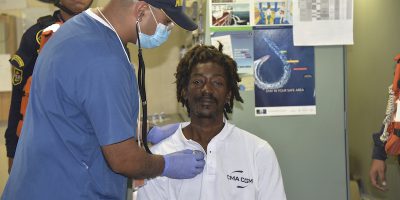 The Colombian Navy said it had rescued a man in the Caribbean who had survived for 24 days aboard his sailboat on ketchup, garlic powder and nuts as he was swept away by currents. The man’s name is Elvis François, he is 47 years old and was found about 220 kilometers north of the Guajira Peninsula in north-eastern Colombia: he had lost control of the boat while repairing it in the southern part of the island of Saint Martin (Sint Maarten, part of the Netherlands), more than a thousand kilometers to the east.

In a video shared by the Colombian Navy, Dominican François said the boat was washed offshore on December 22 because of bad weather. By this time the man had tried to contact some friends but to no avail. Although the boat had taken on water, it stayed afloat but continued to be swept by the currents. François had also written the word “HELP” on the side of the boat and tried to light a small fire to get noticed, but to no avail; Meanwhile, he subsisted by mixing the few things he found on board with seawater. He was eventually spotted by a passing plane after using some mirrors to reflect the sunlight. He was taken to the port of Cartagena, Colombia, where he was examined. His health is fair.