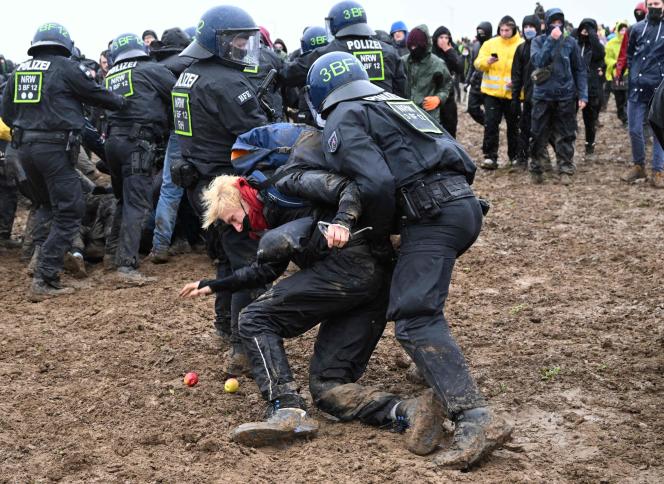 German police drag a protester for the climate cause by the shoulders during the demonstration against the opencast coal mining project in Luetzerath, Germany, Saturday January 14, 2023. INA FASSBENDER / AFP

Each side accuses the other of increasing tension on site on Saturday. Activists speaking out against the expansion of an open-pit coal mine in Lützerah, western Germany, on Sunday (15 January) accused the police of “violently” suppressing their demonstration the previous day. The latter, which escalated into clashes, injured dozens of police officers and protesters.

Indigo Drau, a spokeswoman for the organizers of the demonstration, therefore denounced the “sheer violence” shown by the German police at a press conference on Sunday. She claimed the police beat the climate activists “uncontrollably” and hit several of them on the head.

On Saturday, around 15,000 demonstrators, according to the German police, 35,000 according to the organizers, including Swedish activist Greta Thunberg, protested against the expansion of a lignite opencast mine that led to the destruction of the hamlet of Lützerath in the Rhine catchment area of ​​Düsseldorf and Cologne. The latter had come to support the activists who had occupied the site for two years and whom police wanted to evict this week.

Also read: Article reserved for our subscribers In Germany, Lützerath, the last village before the mine

At the end of the mobilization day, which was marked by violent clashes between the police and demonstrators, the collective Lützerath was alive! (“Lützerath is alive!”) reported that dozens of activists were injured, some of them severely. Twenty of them were hospitalized, according to Birte Schramm, a nurse with the activist group.

Police said on Sunday that nearly seventy of their officers were injured on Saturday and that around 150 people were on trial for resisting police officers, damaging property or disturbing order.

“We were hit by bullets, stones, mud, fireworks,” police spokesman Andreas Müller told Agence France-Presse. According to the police, several police vehicles were also damaged, in particular by stones thrown or punctures. Twelve protesters were arrested or taken into custody by the end of the day.

On Sunday, police also insisted on saying that the situation on the ground had “very calmed down” and announced that they were clearing the evacuation of the hundreds of climate activists occupying the area at the end of an operation launched on Wednesday January began, practically completed 11. Should the evacuation initially last for weeks, only two activists were still in the village on Sunday evening, holed up in an underground mine, the police said.