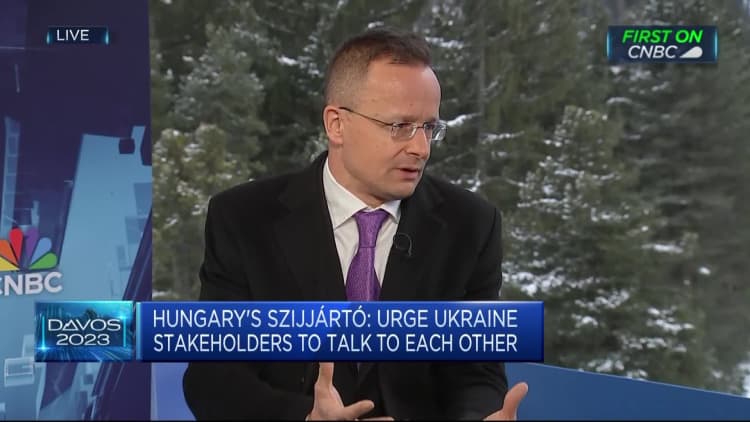 The Hungarian foreign minister slammed the European Union’s sanctions against Russia, arguing that they had done more harm to its members’ economies than to goals and that they had not ended the war in Ukraine.

“When we do an assessment, an analysis of the impact of sanctions, it is obvious that they have not lived up to expectations,” Péter Szijjártó told CNBC’s Geoff Cutmore at the World Economic Forum in Davos.

“Because what was the expectation in early March, late February when we were discussing the first package of sanctions? That they will bring Russia’s economy to its knees, so the war will end soon,” he said.

Sanctions imposed by the EU against Russia include travel bans and asset freezes on a host of high-profile individuals; import and export bans on a range of goods; and an oil price cap in cooperation with the G-7 and other allies. The bloc has also set a goal of drastically reducing its natural gas imports from Russia.

Szijjártó continued: “Russia’s economy is definitely not on its knees. We may have different assessments of how badly they are doing, but they are not on their knees and the war is not over. And Europe’s economy is suffering even more from sanctions than the Russian economy.”

“So if you look at it practically and not ideologically, what were the effects of sanctions, you see that they are more harmful to Europe than Russia. So we shouldn’t move forward with the sanctions because they just haven’t met the expectations and goal we set for them.”

The Russian ruble has been the worst-performing emerging market currency over the past year, although it has held up for some time following the invasion of Ukraine, and the International Monetary Fund forecasts its GDP to contract by 3.4% in 2022, at inflation averaging 13.8%, with another economic crisis this year.

Recent research by the Center for Research on Energy and Clean Air, an independent Finnish think tank, estimated that the G-7 price cap had cost Moscow an estimated €160 million ($171.8 million) a day. The war and resulting energy and food supply crisis have also pushed up inflation in EU countries and raised the specter of recession, although other factors, including the impact of the pandemic on the workforce and supply chain issues, have also been raised as contributing factors.

Szijjártó said Hungary condemned the war and sided with Ukraine, but reiterated that he did not believe sanctions were the way to peace.

“Ultimately, we must help rebuild Ukraine, but if we ruin our own economies, we will not be able to help Ukraine rebuild,” he said.

Asked why Hungary therefore voted for sanctions, he said it had obtained exceptions in areas crucial to its national interests, such as B. when buying oil and gas, since it cannot import from other sources due to the pipeline infrastructure. Szijjártó defended Hungary’s decision not to send arms to Ukraine, as Western powers, including the US, have done and which the leaders of Poland, Latvia and Lithuania on Tuesday demanded should be increased.

He said it had instead opted to provide humanitarian aid to the 1 million Ukrainian refugees who have arrived in the country and would support peace talks as it did not want the Hungarian community based on the border between the countries in the war will be targeted .

Szijjártó also accused the European Union of withholding money owed from European funds tied to bloc-wide economic performance for what he said was “political reasons…because Brussels hates that it has a right-wing, patriotic, Christian-Democratic… Government in Hungary for more than 12 years and it’s still going strong.”

The European Commission referred CNBC to a comment by spokesman Peter Stano on Hungary and the sanctions on Monday, which said: “All sanctions decisions in the EU are taken unanimously by member states.”

“So far, European Union member states have adopted nine wide-ranging sanctions packages against Russia for its illegal aggression against Ukraine, reflecting the EU policy on which the 27 member states agreed that we stand by Ukraine and we stand by them in a series of scars, economically, financially, militarily and through pressure on Putin’s regime through sanctions and international isolation.”

Stano said these are under constant review and any future decision will again be unanimous.